MAHCET CAP 2016: Dont over estimate; know the Merit formula & check where you stand 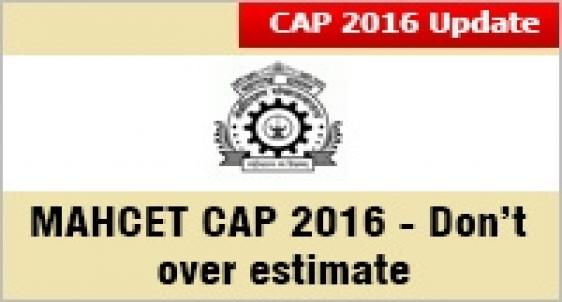 Centralized Admission Process (CAP) 2016 for admission to MBA/MMS 2016-18 batch at JBIMS, SIMSREE, N L Dalmiya, PUMBA and 400 B-schools has already begun on May 25 and will be over on June 3, 2016. There are still 3 days to apply as a new candidate for those who have not registered to seek admission in top B-schools on the basis of their scores in MAHCET/CAT/MAT/CMAT/ATMA/ XAT.

JBIMS has again joined CAP 2016 after a gap of one year and has announced that it would accept admission only through CAP 2016. The announcement has ushered the MBA/MMS 2016-18 aspirants in the domain of anxiety which B school they could get with their scores out of 400 B schools in Maharashtra.

A candidate with a 99 percentile would definitely expect to find himself in the best placed merit position as he has scored the highest percentile in MAH CET 2016. But it may not necessarily happen. Your position in merit may move upwards or downwards due to the merit formation formula of DTE Maharashtra and your All India exam scores.

MBAUniverse.com brings before you the opportunity to find your own merit position with parameters as adopted by DTE Maharashtra

Merit preparation of  MAHCET 2016
For Maharashtra State(MS) and Outside Maharashtra State(OMS) candidates seeking admission against All India Seats, apart from MAHCET 2016 score, DTE Maharashtra will consider CAT 2015; CMAT 2016; MAT 2016; XAT 2016; ATMA; GMAT. The merit list will be prepared on the basis of the highest percentile score obtained by the candidate in any of the above tests.

DTE admission notification states that the scores obtained in the exam will be converted to the percentile score upto 2 decimal points without rounding off.  If a candidate has appeared in more than one examination, the best percentile scored by him shall be taken into account for preparation of merit list.

More weightage will be given for the higher percentage of marks scored in class 12 or its equivalent examination.

Seat Allotment
Seats  will  be  allotted  to  candidates  as  per  their  merit and as  per  the  options  filled  in  the  option  form and  the number  of seats available at  that  point  of  time in  the  stages of CAP  Round.

All candidates eligible for a particular stage of allotment will be considered  for allotment  for a  seat in that stage even if they have been allotted/not allotted a seat in the previous stage.

Upward shift in merit possible
Candidates appear in multiple examinations. For example the candidates who have scored 99+ percentile in MAHCET 2016 and whose admission at any of IIMs, FMS Delhi, IIFT, MDI, IMT, IMI, XLRI has already got the final shape, they may not prefer the B school in Maharashtra and as such, more spaces may fall vacant. Therefore, during  the  allotment  at  any  stage,  the  candidate  may  get  upward  shift  in  the  allotment with  reference  to  the  options filled  in  the  option  form  according  to  availability of seats at that point of time.

How to know about the seat allotment
Allotment of seats to the candidates is proposed to be displayed on DTE Maharashtra website on June 4, 2016.  It would be only provisional allotment. No  personal  communication in the form of  allotment  letter  in  this  regard  will  be  issued  to  the  concerned candidates.

The authorized document for the allotment will be the institute wise allotment list. Besides, allotment against the first available option in the order of options filled in the online option form shall be considered as final.

Avoid candidature cancellation
The candidates, having secured  allotment  are  required  to  confirm  the  admission  by  reporting  at  the institute mentioned in allotment along with the original certificates needed for admission on or before the  last date specified for the same. No personal communication in this regard will be issued. If the candidate doesn’t report at the institute and doesn’t take admission in the allotted institute as per the provisions of respective CAP round, it’s liable that his admission may get cancelled.

Register below free to get LIVE MAH CET CAP 2016 Updates

400 Maharashtra B schools to accept MAT 2016 Feb & May exam score; DTE clarifies on CAP round

Stay tuned to MBAUniverse.com for more updates on MAHCET 2016 CAP round