CAT 2016: Dig out everything from last CAT Exam; will be a concrete step towards club 99

MBAUniverse.com News Desk | :
August 11, 2016
CAT 2016 with same structure and pattern as that of last year, may offer you a better opportunity to join the club 99 percentile if you care to dig out the minute details 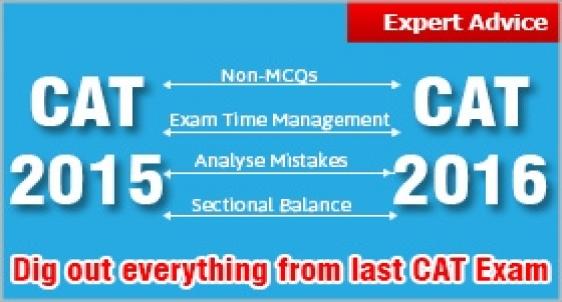 CAT 2016 with same structure and pattern as that of last year, may offer you a better opportunity to join the club 99 percentile if you care to dig out the minute details from last year CAT that may lead you to success.

Please remember despite doing hard work and going for tough preparation plan sometimes CAT aspirants do not get desired result and get a dip in one or other sectional percentile. You may be well aware that CAT last year was totally an overhauled exam with different structure and content and as clarified in CAT 2016 notification, this year also it will be on the same pattern.

The base of your CAT 2016 prep
To begin with, you must be aware about the structure and content of last year CAT which proved  to be one of the most tricky CAT after 4-5 years of stability since 2009 when it was switched to the computerized exam format.

Last year CAT was divided into 3 sections instead of earlier 2 sections and CAT 2016 follows the same pattern. The exam had an increased time limit of 3 hours (180 minutes) as against 2 hours 50 minutes (170 minutes) in CAT 2014. The 10 more minutes without increasing the number of questions in CAT 2015 proved a boon for the test takers who were left with no time to review and rearrange the concluding section and had to submit the test which left no option to review your answers and mark/un mark the answers at the last moment.

All the 3 sections in CAT 2016 also will have the separate time limit of 1 hour each to solve.

Need to practice more on DILR
The newly created 3rd section was based on ‘Data Interpretation & Logical Reasoning (DILR)’ questions which consumed more time with less attempts. Since the questions on DI-LR were clubbed into one, many candidates who used to attempt fewer questions on DI or LR earlier had no option left but to seriously attempt the new section.

Now, CAT 2016 aspirants must focus on this section as it will not have any other supporting part like Quant or Verbal where you can make-up your score.

Avoid Sectional dip: Many of 1814 from club 99 got it
Many 99 percentilers out of total 1814 could not score the qualifying percentile in this section and were not shortlisted by any IIM last year. In view of this problem, IIMs including the top ones like IIM Ahmedabad reduced the minimum required percentile in this section from 80 to 75 last year and anticipating the repetition of this problem again, IIMA has further reduced the minimum asking sectional percentile in CAT 2016 to 70 only in its recently announced admission policy 2017

Practice more Non-MCQs with MCQs
For the first time in CAT last year Non-MCQs were introduced with MCQs. The weightage of non-MCQs was as high as 28% of the total CAT exam. CAT 2016 is expected to follow the same pattern as has already been announced by the IIMs on the website with the release CAT 2016 notification that the exam will continue with non-MCQ type of questions.

Candidates who preferred to attempt the Non-MCQs first got an upper hand as there was no fear of negative marking. Almost all of the CAT takers attempted non-MCQs without fail and many of them got most of them correct as there was no confusion to choose the answer option. Test takers had to solve, arrive at the answer and type in the answer of non-MCQs on the computer screen in the given space.

Now IIM Bangalore is firmly in the saddle to convene CAT 2016. This top rated IIM has been awarded number 1 position by NIRF Ranking 2016 announced by the Government of India. Accordingly the convening B-school may again throw some aspirant friendly surprises at the content level in CAT 2016 test paper. In view of Prof S K Agarwal expert on Verbal Ability and mentor on CAT 2016 preparation, while embarking on your preparation journey to crack CAT 2016 with high percentile, you need good reading skills, fast calculation ability with short cut tricks and high level of conceptual understanding.

Focus on high sectional percentile
Only high over all percentile in CAT 2016 may not be enough to cross the hurdle in securing admission offer from preferred IIMs as you will need high sectional as well as overall percentile score to get shortlisted for final admission round. On the top of it, IIM Bangalore has a different admission policy based on your profile, it is very much required that you also improve your profile alongwith scoring high in CAT 2016.

If second timer, analyse mistakes
If you had low percentile score in CAT last year, you could very well score 99 percentile in CAT 2016, the need is to analyse where you lagged behind, overcome the weaknesses and begin afresh. Please remember IIMs do not need a professor in Mathematics or English Literature. On the other hand you must have fair understanding of the concept on which questions are based and how to crack it.

In fact this is not the lack of confidence but the shadow of overconfidence and temptation to attempt more questions without understanding them that prevent you from scoring high.

CAT 2016 is the gateway to 20 IIMs as well as to hundreds of other top rated non-IIMs like FMS, IMI, IMT, IITs, JBIMS, MDI, SPJIMR, TAPMI, XIMB among others. Registration for CAT 2016 will be online and will open on Monday August 8. The exam will take place on December 4, 2016 in forenoon and afternoon session. IIM Bangalore is the convener of CAT 2016 and is conducting the exam for the first time since it was computerised in 2009.