MBAUniverse.com News Desk | :
August 7, 2016
Topper have been guiding to CAT 2016, IIM Ahmedabad student of PGP 2016-18 batch Pranjal Agarwal was a student BE (Hons) at BITS Pilani when he made news after cracking CAT 2015 with 100 percentile 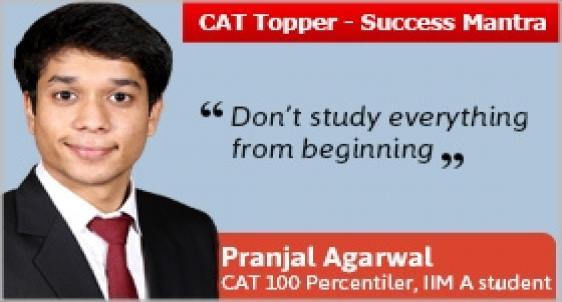 Dont study everything from the beginning, because some topics are too basic to spend time on Pranjal Agarwal CAT 100 percentiler and IIM Ahmedabad student

CAT 2016 may see more 100 percentilers and toppers coming not only from IITs but also from the institutes like BITS Pilani and others as happened in last year CAT.

Pranjal Agarwal, a student of IIM Ahmedabad PGP 2016-18 batch was in final year of BE (Hons) Mechanical Engg at BITS Pilani when he made news after cracking CAT 2015 with 100 percentile.

MBAUniverse.com has brought a round of CAT toppers’ success stories for the benefit of CAT 2016 aspirants. In the series we present the success story of confident Pranjal Agarwal who not only scored 100 percentile in CAT but also converted his admission call to all the top 3 IIMs namely IIM Ahmedabad; Bangalore and Calcutta.

Determined to crack CAT with high percentile, Pranjal appeared only in CAT exam. With his right preparation strategy and well devised plan, he scored 100 percentile. His final scaled score in CAT was 278.06 which led to 100%ile.

Pranjal joined IIM Ahmedabad as a fresher and did not get any work experience weightage. However, he made it a point to prepare well and crack CAT 2015 with a high score so that despite being considered a fresher, he doesn’t lag behind. As a result of his hard work and intelligent preparation strategy he got the top rank and the top B-school of the country.

Sharing with MBAUniverse.com Pranjal highlights his experience in preparation journey to CAT and modestly attempts to give the ‘success mantra’ to the CAT 2016 aspirants

MBAUniverse.com:What was your preparation strategy for CAT?
Pranjal (CAT topper): I had only appeared for the CAT 2015 exam and had prepared using mock test series. You can use them of any coaching institute, but preferably choose the one that has the most number of regular test takers, as that helps you get a good idea about where you stand amongst all your peers. I used to give a test every week or every other week, then revise the results and work on the topics where I fell short of the mark.

MBAUniverse.com: Share some key preparation do’s for the benefit of CAT 2016 aspirants?
Pranjal (CAT topper): While preparing for CAT 2016, what you should do is-
-Give as many full length mock tests as you can. That will help out on your overall performance as it gives you an idea of time management and difficulty of all topics.
-Review all the tests you give to identify your weaknesses. That is important so that you can work on those weaknesses specifically.
-Give more focus to your weak topics because in the end, you are required to perform almost equally well on all the sections.
-Keep communicating with your peers and others around you who are also preparing for CAT and make sure you are caught up with the latest trend and advice too.

MBAUniverse.com: Anything you would like to suggest CAT 2016 aspirants not to do while preparing for the exam?
Pranjal (CAT topper): During our preparation journey, we miss many things. If we understand the nature of the exam and learn from the experience of others, it will be helpful in preparing well for the exam. In my view what CAT 2016 aspirants shouldn’t do is-
-Don’t study everything from the beginning, because some topics are too basic to spend time on.
-Don’t miss out on reviews of tests because the result of the previous test should form your study pattern for the next (by studying for weak topics more).
-Don’t get disheartened by low scores. In my first mock test, I got a relatively low score, and managed to score twice as much in the final CAT exam.

MBAUniverse.com: What was your strategy in testing room to attempt the questions from different sections?
Pranjal (CAT topper):  By the time I was going for CAT, I had prepared all the sections and was intending to attempt all the questions.

When I went into the test, I knew that I would have to attempt all questions anyway, so I started by going in sequential order only. I also decided that even if I wasn’t able to solve all the questions, I would have attempted them all, because there is a +3/-1 policy which results in a break-even score for random attempts. For questions with answer inputs, there is no negative marking.

MBAUniverse.com: Do you advise CAT 2016 aspirants to take the test as per order of questions?
Pranjal (CAT topper):  Yes, I would stress on going in order. If you want to score really well, you shouldn’t start by skimming over the questions and then deciding which ones are easy; your preparation should be such that you know you have to attempt all the questions. Just make sure that you have a point where you realize that a set is just taking too long to solve or that you are unable to solve it. Overall, it’s important that you solve at least 80% of the questions in each section. I had only left the 4 questions in DI and attempted all the others in the other sections.

MBAUniverse.com: How many GDPI did you take part in? What were your GD/WAT topics?
Pranjal (CAT topper):  I took part in the PI/WAT process of IIM A, B, and C only. On the contrary, I would advise people to give as many as possible. I was unable to attend many WAT/PIs owing to travel restrictions (I was doing an internship in Delhi and I had chosen Mumbai as my location for PI).

The WAT topics were as follows-
IIMA – We should not donate to charities. There was a paragraph of an author stating his disdain for charities with some valid arguments. I had to respond to some questions in the form of an essay.
IIMB – India is too ambitious with projects like smart-cities and bullet trains whereas there is still a large portion of the population without adequate housing or transport facilities.
IIMC – Urban air pollution is a menacing problem (Causes/Effects/Solutions).

MBAUniverse.com: Few questions that were asked to you during PI round?
Pranjal (CAT topper): During PI, I was asked about my placement, some core subjects that I studied during my undergrad (Power Plant Engineering, IC Engines, Machine Design). The questions aren’t always straightforward checking your knowledge, but your inference of knowledge.
-For example, in my IIM Ahmedabad interview, I was asked the reason why most sources of energy are first converted into mechanical energy then electrical energy and not directly.
-I was doing an internship in Gurgaon, so in IIM Bangalore interview, I was asked about any major infrastructure problems I noticed in the city (which related to the WAT topic).
-I was asked about my interests, and then about Asian football and Indian football (as a follow up).
-There were some GK questions as well, which could be arbitrary, depending on recent events (ISIS, JNU, CM of various states, PM/President of any country, etc.)

MBAUniverse.com: The institutes that offered you admission?
Pranjal (CAT topper): I appeared for the PI-WAT round of top 3 IIMs. I was offered admission by all 3 IIMs- A, B, and C. Although I was initially waitlisted for B, it eventually got converted.

MBAUniverse.com: Why did you decide in favour of IIM Ahmedabad only?
Pranjal (CAT topper): I chose to come to IIM-Ahmedabad, because it was my dream institute. It follows teaching pedagogy unlike others (the case method) and has a rigorous system focused on academics which makes students disciplined and also makes you understand the importance of personal management as well.

MBAUniverse.com: How did you spend time after getting admission offer from IIM Ahmedabad and joining the B-school?
Pranjal (CAT topper): After finalizing admission, I took some time to relax because I knew that the course at IIM-A would be rigorous and full of hard work and study. So, I did not take up any studies, but learned some basic Excel and also revised some basic concepts of mathematics, for which a question bank was sent by the institute to evaluate ourselves.

MBAUniverse.com:  Any inspiring story that motivated and helped you in getting success in the exam?
Pranjal (CAT topper): My only motivation was that I wanted to get into my dream B-school and that kept me going. It is also easy to relate to any inspiring story of someone else, but at the end of the day, whatever you are doing is for yourself, so that should always be your prime motivation, not what someone else has achieved.

MBAUniverse.com:  Your message and tips you would like to share with the candidates preparing for CAT 2016
Pranjal (CAT topper): I would advise everyone to make sure they give as many full-length mock tests as they can, and try to work on their weak subjects more than their strong subjects, because strong subjects do make you feel good, but studying for something you are already good at will not contribute to improvement of your score. Also, don’t be disheartened by low scores in the preparation stage, because you still have the ability to score higher if you can clear your concepts. Also, try to develop an analytical thinking instead of memorizing formulae or methods to solve any questions. The exam only requires one to think logically, be it DI, LR, or QA.

MBAUniverse.com: Thanks Pranjal for sharing such a valuable guidance for CAT 2016 aspirants
Pranjal (CAT topper):  Thank you very much