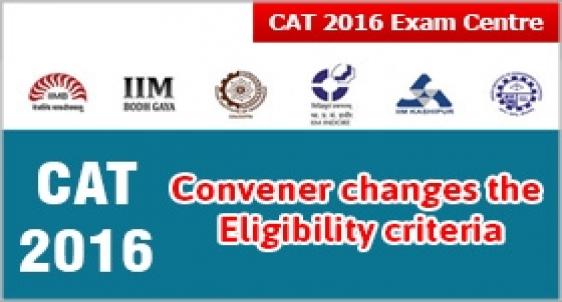 The hidden age bar in CAT 2016 registration and application process has since been removed by the convener as the academic fields for bachelor’s degree in the form stand modified.

Now, CAT 2016 key eligibility criterion no longer demands only 3 or 4 years of bachelor’s degree but also allows the aspirants with shorter duration of 2 years of graduation to apply for the largest MBA entrance test leading to IIMs and other top business schools in India. To facilitate the process, CAT 2016 registration form has also been duly amended.

MBAUniverse.com was approached by many CAT 2016 aspirants including retired bureaucrats, professors of eminent institutes, PSU executives among others whether they will be allowed to take CAT 2016 since they had completed their bachelor’s degree in the old pattern from the universities who used to award 2 years duration bachelor’s degree.

IIM Banglore modifies the form
Acceding to the request of middle and old age aspirants Prof Rajendra K Bandi, convener CAT 2016 and faculty IIM Bangalore has taken pain to modify the structure of CAT 2016 registration form instead of simply asking the aspirants to fill in the 3 years bachelor’s degree and thus saving them from any unwarranted embarrassing situation.

Now the CAT 2016 registration form has done away with this problem and the academics page has got an option to fill up 2 years of bachelor’s degree.

CAT 2016 eligibility has no rider
The eligibility criteria for CAT 2016 have no rider of bachelor’s degree duration. According to it a candidate is eligible, if he/she “holds Bachelor’s Degree with at least 50% marks or equivalent CGPA [45% in case of the candidates belonging to Scheduled Caste(SC), Scheduled Tribe (ST) and Person With Disability (PWD) categories], awarded by any University or educational institution as incorporated by an Act of the Parliament or State legislature in India or declared to be deemed as a University under Section 3 of the UGC Act, 1956, or possess an equivalent qualification recognized by the Ministry of HRD, Government of India.”

Issue raised & considered in past CAT exams also
During the past CAT exams, MBAUniverse.com had also raised this issue before CAT convening IIMs suggesting to either do away with the clause of ‘no age bar’ or to allow the old age candidates with 2 years of graduation to appear in the exam. In 2014 and 2015 CAT Centre allowed such candidates to appear in the exam but with a rider that these candidates had to fill in 3 years of graduation as there was no column to write the 2 years of bachelor’s degree.

The back ground
Aspirants who did graduation till early 80’s might remember that Graduation Degree had 2 years of study duration in Arts, Commerce or Science stream. At that time most of the universities covered under UGC Act followed the system of 2 years graduation. All the top rated competitive exams like Civil Services, CAT/XAT in eighties also recognized and allowed the 2 years graduation degree.

But, no candidate despite being a graduate from UGC recognized University could register for CAT in 2014 or 2015, if he/she had graduation degree of 2 years duration. The registration site required minimum 3 years of graduation. This anomaly persisted till CAT registration site brought amendments after consistent follow up by MBAUniverse.com.

Legitimate claim accepted
MBAUniverse.com has been raising this legitimate issue right from the beginning of the CAT registration process whether CAT needed graduates or graduates with 3 years degree and whether implied Age Bar has been imposed by IIMs to refrain the Old Aged CAT aspirants who wish to pursue PGDM or some other programme from registering for CAT.

14 years of education eligible now
Now the CAT aspirants with 2 years of graduation degree can register for CAT 2016. In fact instructions and guidelines issued in regard to registration for CAT 2016 also explicitly emphasize that there is no age bar to appear in the respective exam.  But the factual position was not so simple and in practical process of CAT registration it was not possible to register with 2 years of graduation degree.

According to the rule and instructions every graduate who has obtained a degree from a UGC recognized University is eligible to register for CAT 2016. On this count no graduate who completed and obtained graduation degree studying in a regular University course can be denied from registering for CAT 2016. IIM Bangalore has proactively modified the registration form to accommodate this amendment.

A good step
MBAUniverse.com appreciates the decision and sees it a good step having positive signs for CAT 2016 aspirants. There are number of top educators with 2 years of bachelor degree and they may wish to pursue PGDM from IIMs and as such will also get the opportunity to appear in CAT 2016.

CAT 2016: Dig out everything from last CAT Exam; will be a concrete step towards club 99