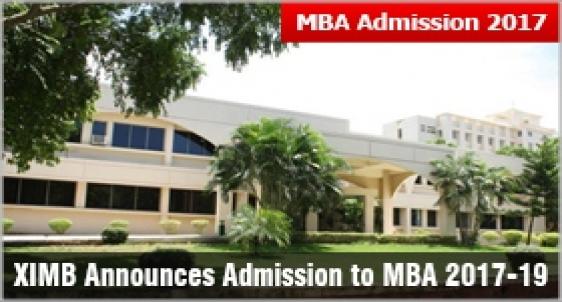 For those who are not able to appear in CAT/XAT/GMAT the B-school will organize X-GMAT admission test on January 29, 2017

For those who are not able to appear in CAT/XAT/GMAT the B-school will organize X-GMAT admission test on January 29, 2017. The final admission round after shortlisting on the basis of written test will include Writing Ability Test (WAT) and Personal Interview but Group Discussion will not be a component of final selection process for MBA 2017-19.

Eligibility
The minimum requirement for admission to the MBA Programme is a 3year Bachelor's degree (or equivalent) in any discipline with at least 55% marks in aggregate from a recognized university. Candidates who expect to complete the final part of their degree examinations by June 15, 2017, can also apply. Offers of admission to such candidates, if made, will be provisional and will be automatically cancelled in the event of their failing to complete all the requirements for obtaining the degree before June 2017.

How to Apply
Fill up the form online at: www.ximb.ac.in or www.xub.edu.in. The application fee is Rs.1300/- if you are applying for one programme. If you are exercising more options, you have to pay additional Rs.800/- for second option and Rs.600 for each subsequent options. Candidates have to apply to XIMB apart from registering and applying for CAT 2016, XAT 2017 or GMAT.

XIMB application process can be completed in 3 steps as follows-

Step-1: Fill up the "Login Details" to create and receive by email a unique XUB ID and Password for applying to XIMB, XUB.

Step-2: Login with your XUB ID and Password. Fill up the Personal Details, Academic Details, Professional Details, upload your photo & signature, and choose the program/s you want to apply for and the respective test option/s, and Submit. (You may keep ready the scanned/digital images of your photo/signature in JPEG format, in advance. The dimensions of photo may be of about 200x250 pixels, and the signature may be of about 250x125 pixels, both images within 50 kb each in size).

Step 3: Pay the application fee through the Payment Gateway. (Application fee is Rs.1300/- for the first option, Rs. 800/- for the second option, and Rs.600/- each for the subsequent options. Use single form for applying for multiple programs and/or through multiple tests.)

Registering for XAT/CAT/GMAT is a prerequisite for applying to XIMB, if not opting for X-GMAT.

The pattern and syllabus will be similar to the other tests like CAT and XAT. The test will be conducted on 29th January 2017 and the candidates will have to make their own arrangements for travel and stay. The time schedule and venue details will be intimated by email, by the 3rd week of January 2017.

It will be a good option for those who have not registered and missed CAT 2016, XAT 2017 and GMAT exams.

Candidates will have to meet their own travel expenses for appearing in the Interview session. The final selection will be made on the basis of the candidate's performance in the XAT/CAT/GMAT/X-GMAT as well as in the Written Ability Test, and Personal Interview (which factors in the past academic record and relevant work experience). The selected candidates will be informed by mail in the month of April 2017.

Xavier Institute of Management, Bhubaneswar (XIMB) was established 29 years ago. XIMB is now Flagship School of Xavier University Bhubaneswar (XUB).  XUB was established in accordance with the Xavier University Odisha Act 2013 and was inaugurated on the 7th of July 2014. The University is India’s first Jesuit University and an institution of higher learning for imparting professional and technical education. Counted among the leading management institutions in the country, XIMB has been awarded A*** grading by CRISIL.

XUB Sustainability Summit2016 at XIMB inaugurated by Governor of Odisha

Stay tuned to MBAUniverse.com for more updates on XIMB admission 2017