MBAUniverse.com News Desk | :
February 11, 2021
Five B-schools from India have been ranked among the top 100 MBA programs in the World by the Financial Times’ Global MBA rankings released on February 7, 2021. ISB is ranked as the top MBA program in India followed by IIM Bangalore, IIM Calcutta, IIM Ahmedabad and IIM Indore. Globally, INSEAD is ranked as the top MBA program. FT MBA Ranking ranks only 1 year MBA equivalent programs, where prior work experience is the necessary admission criteria 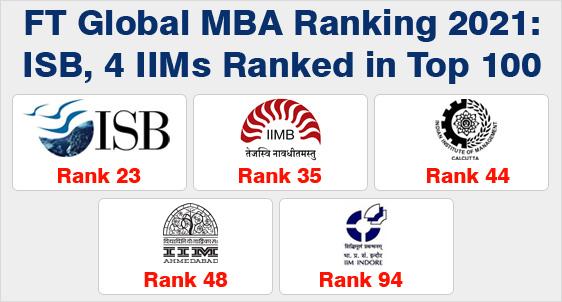 Indian School of Business (ISB) is ranked as the top MBA program in India (and #23 globally) by the Financial Times’ Global MBA rankings released on February 7. A total of five B-schools from India have been ranked among the top 100 MBA programs in the World. It is important to note that FT MBA Ranking ranks only “post-experience MBA” programs, where prior work experience is the necessary admission criteria, and hence ranks 1 year MBA equivalent programs, like ISB’s PGP and IIMA’s PGPX, and not the flagship 2 year MBA/PGPM programs of IIMs.

Globally, INSEAD, with campuses in France and Singapore, is ranked as the top MBA program, followed by London Business School, and the University of Chicago’s Booth School of Business.

FT Global MBA Rankings 21 - Indian B-schools
Coming to India, IIM Ahmedabad has significantly improved its rankings. It has moved up from 61st rank to #48 this year. ISB too has increased its ranking modestly. Here is a quick comparison.

FT Global MBA Rankings 21 - Top 15 in the world
FT MBA Rankings is calculated based on the salaries drawn by the alumni three years after graduation, quality of research, value for money, among others. The rankings are calculated from the data including alumni salaries three years after graduation, the quantity of research in recognised journals and the diversity of students and faculty.

FT’s ranking notes that “that demand for MBAs stayed strong around the world and the salaries of alumni remained resilient when they were surveyed from September to October 2020, several months after the initial spread of coronavirus caused economic harm.” Several schools in FT ranking 2021 reported double digit percentage increases in applications for the 2020/21 academic year. IESE Business School in Barcelona reported a 12 per cent rise year on year and a record number of applications.

As more Indian B-schools launch 1 year MBA programs and aspire to the globally ranked, understanding FT MBA Ranking Process will be helpful. Here is a quick analysis by MBAUniverse.com.