close
MBAUniverse.com News Desk | :
February 16, 2020
AIMA conducted Paper Based MAT 2020 exam on February 16,2020 after the computer based test whichwas held on February 2. The PBT MAT was conductedfrom 10AM to 12.30 PM on similar pattern as was in December. The Exam is rated as easy to moderate with no surprises. A few questions in English Language, Data Analysis and Quant were found a bit difficult. A score of 110-112is expected to fetch 90 percentile cut off 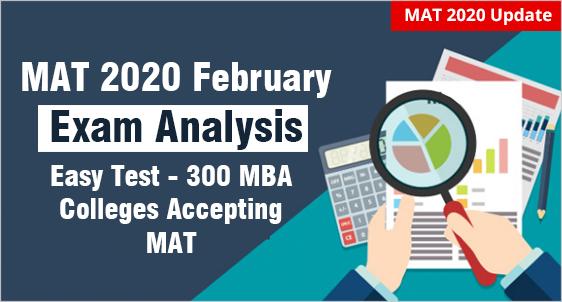 MAT 2020 February Paper Based Test was over at 12.30 PM on Sunday February 16, 2020. AIMA conducted Paper Based MAT 2020 exam on February 16, 2020 after the computer based test which was held on February 2. The PBT MAT was conducted from 10AM to 12.30 PM on similar pattern as was in December. The Exam is rated as easy to moderate with no surprises. A few questions in English Language, Data Analysis and Quant were found a bit difficult. A score of 110-112 is expected to fetch 90 percentile cut off

After September 2019, this is the second time that paper based MAT exam has been conducted after the Computer based MAT.

The paper based MAT 2020exam did not have any surprise element and has remained on similar pattern of last PBT and CBT MAT exams. The exam had  a few difficult questions in Language Comprehension, Data Analysis & Sufficiency and Quant sections. A few questions in Intelligence and Critical Reasoning section were also found a bit tricky as compared to earlier MAT exams.

AIMA has again changed the order of conducting MAT exams in February 2020 and conductedCBT MAT before PBT MAT. Earlier in September 2019, instead of conducting paper based MAT first, the computer based MAT exam was also conducted a week before the PBT MAT.

Language comprehension
There were 40 questions in the section. Major topics and number of question are:

Surprise Element
The MAT 2020February exam had no surprise element and was on the same pattern as that of first last MAT exam in December 2019.

How to Manage Time in MAT Exam: Tips by Test Takers
Two and half hours were allotted to solve 200 questions in MAT exam. With some of the questions found more difficult and penalty of negative marking existing for all the questions, Candidates were found gasping for more time. Many candidates who did not follow time schedule could not get across the 70-75 questions.

Although the overall MAT paper based exam remained moderate, a few questions consumed more time of the test takers.

Skip or Scantly Attempt GK Section
A unique way to manage time with an aim to attempt more questions, was found by the test takers. Since the GK section in MAT exam is not counted for score calculation, many candidates skipped or attempted very few questions in Indian and Global Environment section and utilized this time to attempt the questions in other sections. The strategy helped them to maximise the attempts in all the 4 core sections.

Didn’t Devote More than 30 Seconds
Most of the MAT test takers while coming out of the testing hall, revealed that they maximised the attempts by not wasting the time in case they found even a slightly difficult question in their initial attempts. Besides, none of them devoted more than 30 seconds on one question as during this time they could know whether the question was doable or difficult.

Avoided Negative Marking
Apart from maximising the attempts, these candidates ensured that they should attempt only the questions which could solve accurately. The strategy boosted their confidence level further and they expect higher score due to no or very little loss due to negative marking.

Ideal attempts and Cut offs
The MAT 2020 test takers who maximised the attempts in the exam need to score high keeping in mind the negative marking. Giving time to each of the sections and not getting down by any one section remained an important factor to help the candidates to get high score.

Following table consists of the broad MAT analysis, with guideline to achieve cut off above 90 percentile, ideal attempts according to the difficulty level of questions in each section and suggested time limit to solve each of the 5 sections to score high in MAT 2020:

Top MBA colleges Accepting MAT Score
Following are some of the top MBA Colleges who will accept MAT 2020 February exam score for admission 2020. These are highly ranked and internationally accredited MBA/ PGDM colleges among the MBA colleges accepting MAT score.

Management Aptitude Test (MAT) 2020PBT exam was attempted by more than 19,000 candidates approximately. With around 10-12% absentees only, the actual test takers may go beyond the number of 17,000.

Stay tuned to MBAUniverse.com for more updates on MAT 2020