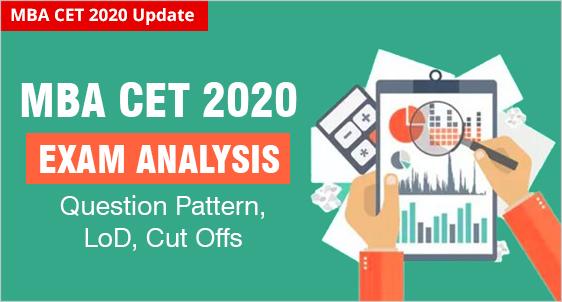 MBA CET 2020 exam, conducted by DTE Maharashtra on March 14& 15, 2020 in four slots has got over now with many changes and surprises to the test takers. The candidates were taken off guard as many new types of questions appeared in the exam. The MBA CET 2020for MBA admission was marked with a lengthy and difficult Logical & Abstract Reasoning. While Quantitative Aptitude section remained moderate, Verbal Ability was on higher difficulty side. Overall exam difficulty level was similar to last year with expected cut off at JBIMS remaining around 138+.

MAH MBA CET 2020 was found on changed pattern. Different type of questions in Verbal Ability, Logical Reasoning were placed in the exam.

At some test centres, interruptions due to minor technical glitches were reported as computer systems were getting disrupted during the test duration. However, all the answers marked by the candidates were automatically saved without posing any further problem to the candidates.

Overall MBA CET 2020 Analysis
MBA CET 2020 was conducted by IBPS which is as per standard layout of IBPS tests. At a few test venues, some of the test takers faced difficulty of system-hang for a brief span, but it got rectified or the students were allotted alternative systems.

Time Management in MBA CET: Big Issue before Test Takers
Less than 1 Minute per Question was available for the test takers with 200 questions to be attempted in 150 minutes. Candidates gasped for more time during the exam.

Candidates had to choose one of the 5 answer options which again demanded a little more time even after using any tips and tricks to solve the question. The only positive was that there was no negative marking and the candidates fighting against the shortage of time resorted to more guess work.

MBA CET Analysis: Sectional composition and difficulty level
MAH MBA CET Exam 2020 had 4 sections. However, effectively there were 3 sections only as 100 Reasoning questions were based on Logical and Abstract Reasoning.

MBA CET Exam 2020: Sectional Analysis
All the four sections in MAH MBA CET 2020 are referred to as tests and not as sections. The detailed sectional analysis by experts for each of the four tests in MBA CET 2020 is as below:

The overall types of questions that appeared in Verbal Ability and Reading Comprehension section in MBA CET 2020 is:

A good attempt of 42-44 questions in Logical Reasoning would lead to a high percentile in MBA CET 2020.

A good attempt of 18-20 questions would lead to high percentile.

Good attempt of 34-36 questions would lead to high score.

MBA CET 2020 Cut Off: JBIMS, SIMSREE, KJ Somaiya, PUMBA
Difficulty level in MBA CET 2020 has remained moderate except for questions in VARC and Reasoning sections. Going by the trend, it can be observed that a good attempt of around 150questions plus guess work would lead to a percentile of 99. If the slot you have appeared in, is considered more difficult, you may even get a higher percentile on low scores.

MBA CET 2020 witnessed around 15% less turnout out of 80000 plus candidates vying for admission in JBIMS, SIMSREE, PUMBA, K J Somaiya, N L Dalmia among other top MBA colleges in Maharashtra. MAH MBA CET 2020is conducted in more than 40 test cities across the country.