Pursuing MBA is the Best investment During Slowdown and Recession: Experts

MBAUniverse.com News Desk | :
March 31, 2020
IMF Managing Director Kristalina Georgieva has recently said that the world economy has entered a recession as bad or worse than in 2009. However, the observation of Standford University Professor is that Higher Education is a counter-cyclical industry as the college-going has increased in every recession since the 1960s. Read this article to know how and why enrolling into an MBA in times of slowdown is a good idea. 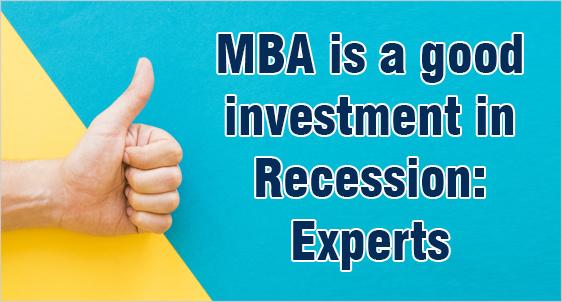 The world economy is in the face of a devastating impact due to the coronavirus pandemic and has entered a Recession, the International Monetary Fund said on March 27, 2020. "We have reassessed the prospects for growth for 2020 and 2021. It is now clear that we have entered a recession as bad or worse than in 2009. We do project recovery in 2021," IMF Managing Director Kristalina Georgieva told reporters on March 27, 2020.

Rating agencies in India are unanimous that the Covid-19 pandemic will be an economic tsunami. Even though the country may not slip into a recession, unlike the Eurozone, the US, or Asia-Pacific that have stronger trade ties to China, analysts believe the impact on India’s GDP growth will be significant. On March 27, Moody’s Investors Service sharply slashed its projection for India’s GDP growth in calendar year 2020 from 5.3% to merely 2.5%.

In such a scenario it’s quite natural for MBA Applicants, who are students or working executives, to ask the question – Is enrolling into an MBA in times of slowdown and recession a good idea? Editorial team at MBAUniverse.com researched this question and presents our assessment.

Let’s begin by looking at what an important and oft-quoted global research tells us.

Higher Education is a Counter-cyclical Industry: Stanford Research
According to Prof Caroline Hoxby, Professor of Economics at Stanford University and author of ‘How the Financial Crisis and Great Recession Affected Higher Education’, when the Recession struck in 2008, it made young people think differently about American higher education.

“The evidence shows that students were more likely to enrol in college and were more likely to stay in college during the Great Recession. This may seem surprising, but actually college-going has increased in every recession since the 1960s. In short, even though families may find it more painful to pay for college during a recession because their incomes and home values are stagnant or falling, they do pay for college. This is the sense in which higher education is a counter-cyclical industry,” says Prof Hoxby.

According to Graduate Management Admission Council (GMAC), MBA Applications have increased in recessions. In 2009, more than two-thirds of full-time MBA programs received more applications than they did the previous year, according to GMAC.

In India too this trend was noticed during the last economic slowdown in 2008. According to an Economic Times news article dated January 21, 2009, Indian School of Business (ISB) saw a 20-25 % surge in the number of applications for the course. This was a huge jump, and the main reason was the new-found interest among executives to join an MBA course during recession, ISB’s then Admissions Director VK Menon had told ET.

So why do applications increase in tough times? And why is MBA Education a good investment in bad time? Let’s find out.

MBA in Recession - A good investment

In times of slowdown, the Placement scenario at even top engineering colleges including IITs, NITs and other institutes is far from satisfactory. Even after completing your B.Tech/B.E., it is not likely that you could get a very good job with desired salary package in a very good company as was available a few years ago. On the top of it, the existing global economic slowdown and outbreak of Corona Virus has brought the industrial growth to a minimum level. As such, the demand for engineering graduates is going down, unless the person is equipped with some added management qualification.

It is therefore, of utmost importance to acquire the management skills that would add to the learning in a practical business scenario. In almost all top 50 B-schools, more than 50% MBA graduates are from engineering background. This is a good opportunity to take your career to the next level by pursuing MBA during the recession. By the time you complete your MBA, more career opportunities will be waiting for you.

During this coronavirus led recession, many companies particularly those in Hospitality sector, Airlines, Travel and Tourism are laying off workers. New York Times article Layoffs Are Just Starting, and the Forecasts Are Bleak dated March 17, says, “Shutdowns in the U.S. retail and hospitality businesses may be an early sign of the job losses that the coronavirus outbreak will inflict on the economy.”

CNBC article titled Coronavirus jobs survey: 49% of companies considering layoffs, more than one-third freezing new hires, published on March 30, echoes the same sentiments. Quoting a survey it notes that “Nearly 50% of companies say they are at least somewhat likely to conduct layoffs over the next three months due to coronavirus COVID-19, while more than one-third of firms (37%) say they already have instituted a hiring freeze.”

This scenario will playout in Europe and parts of Asia too. While India may not be hit as badly, Indian economy will be hurt too.

So, instead of looking for a job during this recession, it will be better to improve your profile, add new skills by pursuing an MBA with your preferred specialization.

You can’t expect promotion during the bad times! On the contrary, organization are likely to cut salaries and layoff people.

On March 27, Nasdaq listed Indian travel company MakeMyTrip announced salary cuts. MakeMyTrip founder Deep Kalra said that the pay cut will happen across top and managerial levels of the company. Salary cut has also been done across MakeMyTrip subsidiaries - Goibibo and RedBus. The announcement has come a day after Deep Kalra and the other founder Rajesh Magow decided to draw zero salaries starting April. They also said that the leadership team at MakeMyTrip would be taking a 50 per cent salary cut. Besides, the company might also lay off about 400 employees who are not on its payroll. Similar scenario is likely to playout in many Indian companies.

The likely impact of coronavirus is so huge that even Governments are taking a Pay cut! On March 30, K Chandrashekar Rao-led Telangana State Government decided to impose big salary cuts in view of the coronavirus outbreak. The Chief Minister is taking a 75 per cent salary cut, along with his cabinet, MLCs, MLAs, state corporation chairpersons and local bodies representatives.

So, why to cling to a stagnating system? Instead prepare yourself to leapfrog to a top job in next few years after completing your MBA.

A crisis draws the best of humans, goes the saying. Indeed, in times of crisis, the best minds across the world interact to find solutions to crisis. Much more use of technology and innovation is expected. And media is very vigilant – reporting such initiatives in great details.

In such an environment, the best management professors discuss the economic and management theories in class and related to the current business situation. This offers rich learning for students.

Making best use of the tough time of recession and Corona lock down is to study how the business and economy can be managed to put them on high growth trajectory and pull them out of recession. MBA is the best program to make you learn this with practical training.

Generally, economic recessions don’t last for very long. According an analysis of US economy, since 1900, the average recession has lasted only 15 months while the average expansion has lasted 48 months. The Great Recession of 2008 and 2009, which lasted for 18 months, was the longest period of economic decline since World War II. In India too, 2008-09 slowdown lasted about 18 months.

So, you can expect a global slowdown for 12-18 months. India too will be impacted by global economies like US, China and Eurozone.

But the economic cycles are bound to rebound with high growth prospects after the recession phase is over. It may take one or two years, and by the time you finish your MBA, many good options will come up. By the time you complete your MBA, economy will be back on track. Also, if you are a working professional and can get a sabbatical/study leave from your organization, go for it and complete your dream of doing MBA and get better career opportunity in your existing or other organization. For fresh graduates this is a great opportunity to enter into good B-schools and earn the coveted MBA qualification.

Search and Compare Top Indian B-schools on this link: https://www.mbauniverse.com/top-mba-colleges.