Facebook Reliance Jio Deal: Will it help to boost Business Growth in India? 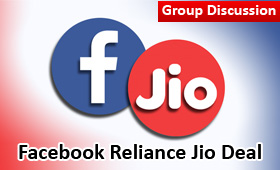 The deal will help reduce RIL’s debt burden, which has gone up due to the breakneck expansion of Jio and other businesses. Mukesh Ambani invested around $40 billion to launch Jio in 2016. Apart from launch and expansion of Jio services, RIL has also massively invested in becoming the largest retail player in India with a series of aggressive expansionary moves into consumer-facing businesses such as e-commerce and grocery.

The Facebook-Reliance Jio deal is now the centre piece of the ambitions of India’s biggest private company to cut net debt to zero by March 2021.

Benefits of the Deal

Recently, Reliance Industries Limited (RIL) has been deploying accelerated efforts to reduce debt by attempting to sell stakes worth billions of dollars in some of its businesses. RIL is in talks with Saudi Aramco to sell 20 percent of its oil to chemicals business and Canadian private equity firm Brookfield Asset Management for a stake in its telecom tower business.

For Facebook, India has in recent years emerged as a critical market. The company has more users in India than any other country. Its WhatsApp chat service, which has attracted 340 million users and is about to launch a key payments service will take on incumbents Paytm, Google Pay, PhonePe and Amazon Pay.

Despite the rapid growth of its social network and WhatsApp, Facebook stumbled with its Free Basics plan to provide free internet services after a ban by Trai, the telecom regulator of India.

With Jio on its side, Facebook has an established ally with a large and well  established rural network that is present in sectors ranging from telecom to ecommerce to home internet.

2. Moving Away from Chinese Apps

The deal will help Facebook to fight successfully against the rapidly growing Chinese apps like Tiktok which have attracted India’s youth.

Besides, Facebook and RIL are expected to square off against some formidable online shopping rivals like Amazon, Walmart that have each invested billions in the South Asian market. The deal will also help Facebook & RIL to take firm ground opposite the four way Japanese tech Softbank , US heavyweights Google and China’s Alibaba.

The investment by Facebook to the tune of $65.95 billion is probably the largest ever FDI in Telecom sector that can boost the growth of Indian digital market.  This is the largest investment for a minority stake by a technology company anywhere in the world and the largest foreign direct investment in the technology space in India.

With Reliance Jio being the biggest telecom operator in the country with more than 370 million subscribers, the deal, which valued Jio at a pre-money valuation of $65.95 billion, makes Facebook the largest minority shareholder in the Indian telecom network as well.

For instance, by bringing together JioMart, Jio’s small business initiative, with the power of WhatsApp, the collaboration can enable people to connect with businesses, shop and ultimately purchase products in a seamless mobile experience.

The partnership by RIL-Jio with Facebook will make an important contribution to India’s economic recovery and resurgence in the shortest period of time in the post-Corona era. According to Mukesh Ambani, Chairman & MD of Reliance-Jio “All of us at Reliance are humbled by the opportunity to welcome Facebook as our long-term partner in continuing to grow and transform the digital ecosystem of India for the benefit of all Indians.”

Massive investment by Facebook values Jio Platforms amongst the top 5 listed companies in India by market capitalization, within just three and a half years of launch of commercial services.

1. Only a Commercial Deal to Reduce Reliance Jio Debt Burden

The Face Book - Jio deal is purely commercial in nature as it will help reduce RIL’s debt burden. For Facebook it gets a firm foothold in a fast-growing huge market of India

Last year, Reliance said that it would turn Jio into a new digital services company by investing nearly $15 billion, potentially attracting investors in the run-up to an eventual listing. The Jio-Facebook comes after Microsoft signed a 10-year deal with Reliance in 2019 to power the Indian company’s data centers with its Azure cloud.

Commenting on the deal, RIL said this is the largest investment for a minority stake by a technology company anywhere in the world and the largest FDI in the technology sector in India.

In less than four years, Jio has brought more than 388 million people online, fueling the creation of innovative new enterprises and connecting people in new ways. Facebook now plans to connect to more people in India together with Jio platforms

Beneficial, if under Watch by Regulator

Since its launch three years ago, Jio, led by billionaire Mukesh Ambani, has grown at a sprinter’s pace to become India’s largest telecom company. It has accumulated some 340 million customers through a barrage of innovations, including offering cut-throat mobile internet prices and a diverse suite of products and including chat services, movies, games and music.

If properly planned and implemented, the Facebook-Jio deal may turn the table in favour of Indian Economy and if left unwatched, the huge profit earned from India may be swept away by Facebook for its own benefit. The Government of India, TRAI and other regulatory authorities have important role to play in this regard.