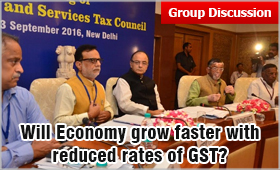 The Finance Minister of India, Ms Nirmala Sitharaman announced on Friday September 20, 2019 a substantial Corporate Tax Rate cut to boost the economic development of India. Since Corporate Tax also called corporation tax or company tax, is a direct tax, the changes in its rates will not impact the GST rates as Goods & Services Tax remains an indirect tax.  Important changes in Corporate Tax as announced by the Finance Minister of India include the reduction of corporate tax rate to 22% from 30% while for new manufacturing companies it has been cut down to 15% from 25%.

Impact of fiscal and monetary policy changes on economy is more relevant to understand whether it would bring with it a wheel of growth or could prove against the economic and business interests of the country, an MBA student is supposed to know and must be able to speak about it in the GD round after gathering thought and analyzing the pros and cons of the same.

What is the GST
Goods and Services Tax (GST) is an indirect tax applicable throughout India which has replaced multiple cascading taxes levied by the   Central and State governments. GST was introduced as The Constitution (One hundred and first Amendment) Act 2017 following the Constitution 122nd Amendment Bill. The GST is governed by a GST Council and its Chairman is the Finance Minister of India. The process of forming the legislation took 17 years. It was first proposed in the year 2000. The minimum tax rate under GST is 0% and highest tax rate is 28%.

GST is a consumption-based tax the impact of which will be at the destination. The taxes therefore, are paid to the state where the goods or services are consumed and not the state in which they were produced.

IGST complicates tax collection for State Governments by disabling them to collect the tax owed to them directly from the Central Government. Under the previous system, a state would have to only deal with a single government in order to collect tax revenue.

The Goods and Services Tax Network (GSTN)
Government has created GSTN as a non-profit organization. As per the government website on GST, "Goods and Services Tax" Network (GSTN) is a nonprofit organisation proposed to be formed for creating a website / platform for all the concerned parties related to the GST, namely stakeholders, government and taxpayers to collaborate on a single portal. When up and running, the portal is supposed to be accessible to the central government which allows it to track down every transaction on its end while taxpayers are advertised to have the ability of connecting this to their tax returns. However its efficacy and efficiency is yet to be tested. The IT network was touted to be developed by unnamed private firms. The known authorised capital of GSTN is ₹10 crore (US$1.6 million) in which Central Government holds 24.5 percent of shares while the state government holds 24.5 percent and rest with private banking firms for smooth running of the transactions.

GST Launched WEF July 1, 2017
After a long nationwide debate on Goods and Service Tax (GST), the initiative was launched at midnight on June 30, 2017 in a ceremony held at Central hall of Parliament.  Various provisions and benefits of GST were shared in their speeches by the Finance minister of India, Mr Arun Jaitley; the Prime Minister of India Mr Narendra Modi and the President of India Shri Pranab Mukherjee.

Current tax rates were replaced by GST rates with effect from July 1. It is the fourth time since Independence that an event was held at the Central Hall of Parliament at midnight. The last three celebrated India's Independence. Congress boycotted the GST launch along with several other opposition parties. GST replaced a slew of indirect taxes with a unified tax and was set to dramatically reshape the country's 2 trillion dollar economy.

The Cheaper and costlier after GST launch 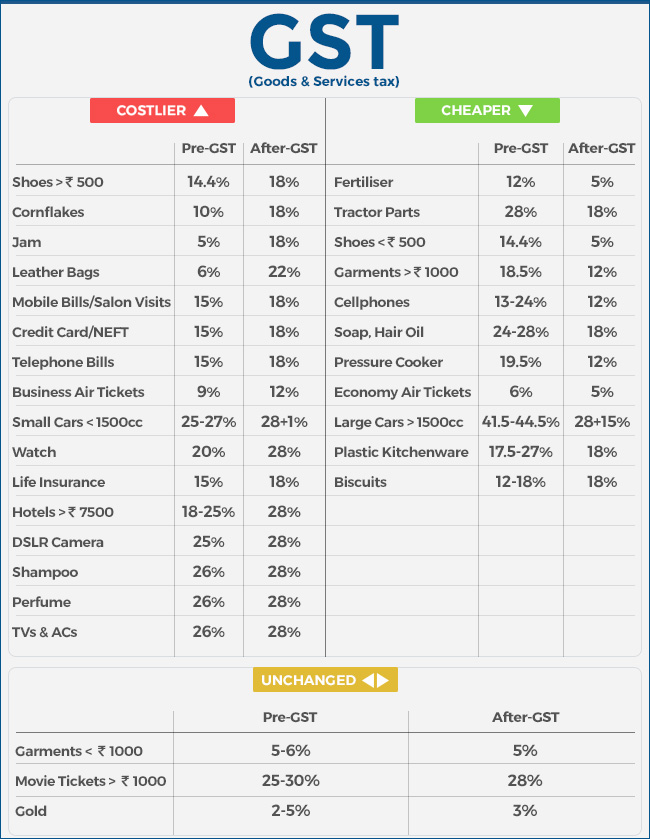 Inflationary impact
The GST fuelled inflation in the short term. The GST rate started at 5% and went upto 28%. The 18% taxation on services such as restaurants; movies increased prices. Another problem with the GST is not including liquor and petroleum under GST’s ambit. These are major revenue sources for the government.

After the introduction of the GST, while costs of essential food items did not increase so much, other consumer goods and services in India including food, hotel charges, insurance and cinema tickets have become costlier. Upon its introduction in the country, GST led to a number of protests by the business community, primarily due to an increase in overall taxes and hence the prices of goods. Thousands of cinema theatres in the states where higher rate of GST was applied on movie tickets went on strike.

However, with the launch of GST, the check posts across the country were abolished ensuring free and fast movement of goods.  The central government has assured states of compensation for any revenue loss incurred by them from the date of GST for a period of five years. However, no concrete laws have been framed to support such action.

The following taxes have been replaced by the GST:

GST is in a form of comprehensive indirect tax on manufacturing, sales and consumption of goods and services within the country. It is based on the input tax method. The tax is levied and collected at each stage of sale or purchase of goods or services.

Changes in GST
Barely three months after rolling out the Goods and Services Tax, Finance Minister Arun Jaitley, who heads the council, also announced businesses with a turnover of up to 1.5 crores would be allowed quarterly filing of GST Return.

Small and Medium traders and exporters were hurt most by the application of GST. It was crucial to Prime Minister Narendra Modi’s plans to create millions of more jobs. Accordingly, the decisions were taken with a view to raise revenue and ease compliance. Following are the major changes in GST implementation taken to boost the growth rate of Indian economy and provide an environment for ‘Ease of doing Business’.

The Prime Minister, Mr Modi has also promised to fix problems in GST cited by businesses.

Reduced GST rates
GST rates for certain Goods and IGST rates on Imports of specified Goods were reduced shortly after the launch of GST:

B.     IGST EXEMPTION ON IMPORTS OF GOODS:

After the changes in GST rates, it is expected that prices of essential items will stop increasing.   The small and medium businesses which saw no growth, would be on the track again and will contribute to the economic growth of the country. Read More Group Discussion Topics

GST Rates for 29 Goods and 53 Services have been reduced. These rates will come into effect from 25th January 2018.

Compensation cess is reduced to 0% for following motor vehicles :

1. Transportation of petroleum crude and petroleum products with ITC Credit.

3. Works Contract Services by Sub-contractor to the Main contractor under the following scenario:

Where the main contractor provides WCS to Central Government, State Government, Union territory, a local authority, a Governmental Authority or a Government Entity at the rate of 12%

5. Mining or exploration services of petroleum crude and natural gas and for drilling services in respect of the said goods

After the changes in GST rates, it is expected that prices of essential items will stop increasing.   The small and medium businesses which saw no growth, would be on the track again and will contribute to the economic growth of the country.