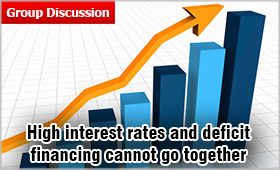 Economy of a country is controlled by the Government as well as the Central Bank of the country. Both have to formulate the policy which should be complimentary to each other.

There has been a large scale criticism in Indian context in regard to the coordination of these policies formulated by the Government of India and the Reserve Bank of India. The lack of coordination issue has remained a hot discussion topic. Since the topic is more related to management of economic system, many B schools have included it in their GD round

Important fact
Ideally a country’s economy is controlled by two types of economic measures by the policy makers – Fiscal and Monetary. While Fiscal policy is framed and implemented by the government with regulation of its spending and collection of revenue, the Monetary policy is controlled by the Central Bank of the country. In India it is The Reserve Bank of India.

Interest rates, Reserve Ratio to be controlled by RBI

India needs primary surplus
Indian economy that is on its path of growth requires Monetary and Fiscal policies following each other in right perspective. RBI Dy. Governor H.R. Khan was of the view "As we have articulated time and again, it (monetary policy) has to be in tandem with the fiscal policy. It has to be a joint venture. It is not a solo play," It is important to focus on the primary deficit. The indicator of understanding where we stand is the primary deficit, deficit net of interest payments. Under normal circumstances, a country should always run primary surpluses.

In 1999, India had Kargil war, one or two years of primary deficit might be understood. In 2008-09, there was a global crisis; one year of primary deficit would be enough to recover out of it. But in every normal year, we should be running primary surpluses.

The Fiscal and Monetary policy therefore, have to be framed and implemented coherently to attain a set of objectives, oriented towards the growth and stability of the economy.  However, in India for the past two decades, the mismatch between the fiscal and monetary policies has remained a major concern in the emerging market economy.

When there is deficit financing, the high bank deposit and advance rates attract the customers to keep their deposits in banks and due to high rates of loans fewer borrowers turn up for loan. Whatever impact the fiscal policy wanted to create, is defeated by Monetary policy.

However, the Government has now taken some bold steps like doing away with subsidies, FDI in retail, and it appears that the country is coming out of current account deficit and the balance of payments is moving into surplus territory, appreciation in the rupee is expected, money markets are expected to react positively to it with the greater confidence of foreign investors. To support these growth prospects a well designed monetary policy is required.

After the demonetization 2016, the need is to restore the growth rate which has started falling down to around 6% from 7%. To achieve the goal both fiscal and monetary policies need to make available more loanable funds at low interest rate...