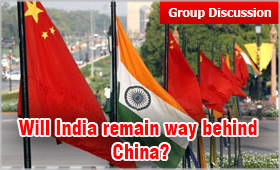 An important component of final admission round for MBA in top B-schools is Group Discussion (GD). It carries a good weightage and success in it can enable you to convert the call.

One of the recent hot topics under discussion at the National and International level is whether India that used to be far ahead in economic development and progressed at a faster pace after independence than China, would now remain behind the dragon which has been leaping forward in all spheres of growth and development in almost all the sectors.

This topic is now placed in the GD round for MBA admission in number of B-schools. Candidates are advised to take clues from the undernoted pros and cons on the topic and present their view effectively taking more entries during Group Discussion round.

The report that Chinese dragon is way ahead of Indian elephant in terms of the respective future  growth is not a myth since the statistics and the impact of China on Global economy can be very well observed. In order to match the growth of China, the Indian elephant needs wings to fly else it will remain way behind.

China and India both suffered a lot but India has not been able to manage its growth map in a sustained and planned manner while China has surpassed all the estimates and is ready to emerge as second to none in near future.

Against the Topic (Cons)

India is a country that has open economy. It pushed the import liberalization policy harder, has consistently been making efforts to strengthen the international relations. The period of early 1990s saw the liberalizing economic policies, increase in annual growth rates, the reform process has been kept up, has maintained its territorial integrity. Unlike Pakistan, India has not had a civil war, has survived as a democratic open society based on consensus and debate. Life is about more than per capita income and its growth...