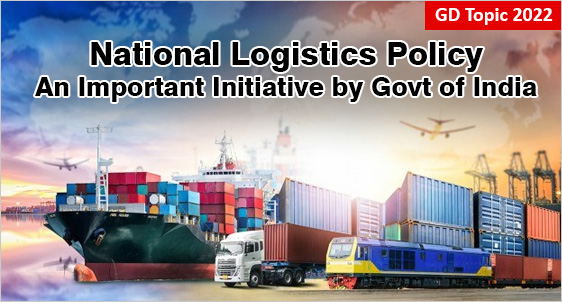 The Prime Minister of India, Shri Narendra Modi has announced the National Logistics Policy on September 17, 2022 with the key objectives to ease and accelerate the movement of goods, giving a boost to trade sector by minimising the cost of logistics which stands around 13 to 14 percent at present, and to enhance the competitiveness of India among top exporting countries.   Incidentally, the National Logistics Policy was launched on the day of bringing Cheetahs to India. On the launch of the policy, the Prime Minister emphasized that goods should move fast like a cheetah so that the present logistical costs which run around 13 to 14% of India’s GDP, almost double of the costs in developed countries, can be minimised to improve India’s competitiveness in exports.

Need for the National Logistics Policy (NLP)
India’s logistics sector has a complex regulatory environment due to multiple regulations governed by various stakeholders. There are over 20 government agencies; 37 export promotion councils; 500 certifications; 200 shipping agencies; 36 logistics services; 129 Inland Container Depots and 168 Container Freight Stations through which the movement of goods happens. The logistics sector is also heavily dependent on road transport. There is also a low level of technology adoption among various stakeholders. The high indirect costs due to unpredictable supply chains and poor first and last mile connectivity add to the high logistics cost.

To overcome these problems which are crucial to trade including transport services for the movement of goods, storage facilities that are particularly essential for trade in perishable goods such as food items, fruits, and vegetables, and smooth functioning of government services that facilitate trade such as licensing and customs, the need was felt to launch the National Logistics Policy for faster movement of goods. In October 2021, at the launch of the PM Gati Shakti-National Master Plan for multi-modal connectivity,  PM Modi had said: “According to a study, the logistical cost in India is about 13% of GDP. Such a situation does not exist in developed countries. Due to high logistical cost, the competitiveness of India’s exports is greatly reduced”.

Besides, India is ranked very low among the exporting countries due to the high costs of Logistics. In 2018, India was ranked 44th in the World Bank Logistics Performance Index, a measure through which the Bank ranks countries based on their logistics performance. While India currently records relatively higher logistics costs at 13-14 per cent of the GDP, it is much lower at 7-8 percent for most of the developed economies. The Logistics sector is highly fragmented and unorganised. Accordingly, the Government of India has decided to launch the National Logistics Policy (NLP)

A Unified Logistics Interface Platform ULIP will, according to the Prime Minister, Shri Narendra Modi, “bring all the digital services related to the transportation sector into a single portal.” A new digital platform Ease of Logistics Services (E-Logs) has also been started for industry associations to resolve issues by reaching out to the government.

The NLP seeks to pave the way for India to become a logistics hub by providing seamlessly integrated multiple modes of transportation by leveraging technology, processes and skilled manpower.

The last year launch of PM Gati Shakti scheme which envisages efficiency in services like processes, digital systems and regulatory framework also aims to improve the movement of goods.

Key Steps being by the Government to Improve Logistics
Since 2014, when the Modi government came to power, there has been much emphasis on improving logistics, through initiatives like Sagarmala for shipping, Bharatmala for road and UDAN for aviation. In October 2021, PM Gati Shakti was launched as a National Master Plan for multi-modal connectivity to bring together 16 ministries, including railways and roadways, for integrated planning and coordinated implementation of infrastructure connectivity projects.

FASTag for electronic toll tax collection and faceless assessment for customs is also a key step to accelerate the movement. In terms of scale, the biggest of these plans is the Gati Shakti master plan, and the PM said: “A huge amount of information related to different infrastructure projects of state governments has been prepared. Today, data from the central and state governments in about 1500 layers are coming on the PM Gatishakti portal”.

A single platform was launched for ministries to monitor the progress of various infrastructure projects. Later, the PM said the Centre was aiming at adding over 200 airports, helipads, and water aerodromes where aircraft can land, over the next 4 to 5 years, besides nearly doubling the existing natural gas pipeline network of around 19,000 km.

Ease of Logistics in India: Top States
In a Ministry of Commerce and Industry survey last year, titled ‘Logistics Ease Across Different States’, Gujarat, Punjab, and Haryana were ranked as the top three states. The parameters included to measure the Ease of Logistics were, the quality of road and railways infrastructure, road freight rates, quality of warehousing infrastructure, among others. The survey suggested that states should focus on areas such as developing sector-specific skilling infrastructure and streamlining logistics-related approval and clearance processes.

Industry Leaders support NLP
After the NLP was announced, the response on National Logistics Policy has been positive from stakeholders.

Although Udit Sangwan, co-founder of Agrigator said it is still too early to say about implementation and impact on the Agri supply chain and benefit to stakeholders involved in this, but he is optimistic and said “This policy will reduce friction in cross-border transactions as policy aims to use robust infrastructure and technology to support a fast-growing Agri economy.”