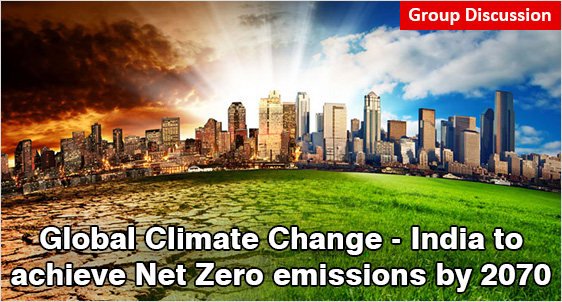 The UK hosted the 26th UN Climate Change Conference of the Parties (COP26) in Glasgow on 31 October – 13 November 2021.Speaking at the Global Climate Change conference, UN Secretary General António Guterres demanded that people stop "treating nature like a toilet" he sharply criticised continued use of fossil fuels, saying "we are digging our own graves". UK Prime Minister Boris Johnson said future generations "will judge us with bitterness" if they failed at the conference, while US President Joe Biden said that "none of us can escape the worst of what's yet to come if we fail to seize this moment".

At the Conference, Prime Minister Narendra Modi declared a five-fold strategy to achieve Net Zero emissions by 2070. These five points include:

Certainly, India’s climate change targets were noticed across the world. India had "clearly put the ball in the court of the developed world" by announcing 500 gigawatts (GW) of non-fossil electricity capacity, half of energy from renewables, a reduction of emissions by one billion tonnes and emissions intensity of the GDP by 45% by 2030, according to Arunabha Ghosh, Chief Executive Officer of the Council on Energy, Environment and Water, a leading climate think tank.

To study the global climate change effects and find Global Climate Change Solutions timely, the United Nations Framework Convention on Climate Change (UNFCCC) established an international environmental treaty to combat the dangerous human interferences with the climate system. It was signed by 154 states at the United Nations Conference on Environment and Development (UNCED), known as Earth Summit. Later, Kyoto Protocol was signed in 1997 and ran from 2005 to 2020. It was the first implementation of measures under the UNFCCC. The Kyoto Protocol was superseded by the Paris Agreement which entered into force in 2016. By 2020 the UNFCCC had 197 states parties. Its supreme decision-making body, the Conference of the Parties (COP), meets annually to assess progress in dealing with global climate change causes and effects. Chronology of Events for Global Climate change conferences and discussions are:

India Not as Big an Emitter of Carbon Dioxide as China, USA and EU
Before we talk about the five-fold strategy outlined by PM Modi, let’s understand the context. According to a BBC report, India is the world's fourth biggest emitter of carbon dioxide after China, the US and the EU. But India’s huge population means its emissions per capita are much lower than other major world economies. India emitted 1.9 tonnes of CO2 per head of population in 2019, compared with 15.5 tonnes for the US and 12.5 tonnes for Russia that year. India Commits on 5 Point Climate Change Solutions
What do these five ambitious targets by PM Modi at COP26 mean? Can they be achieved within timeline? Let’s find out…

1. 500 GW of non-fossil fuel energy capacity by 2030
India’s Central Electricity Authority (CEA) has done a projection for the country’s energy mix for 2030. According to this, India’s installed capacity of non-fossil energy for electricity generation — solar, wind, hydel and nuclear in 2019 was 134 GW and by 2030 it will be 522 GW. This will require solar energy installed capacity to go to 280 GW and wind energy to go to 140 GW. According to this, total installed capacity will be 817 GW and power generation will be 2,518 billion units in 2030.Under this scenario and energy trajectory, India will be able to meet its 500 GW of non-fossil fuel energy capacity by 2030.

2. India expected to meet 50 per cent of energy requirements from renewable
Green energy is the new wave sweeping India. In 2019, India was meeting 9.2 per cent of its electricity generation from renewables. By 2021, with an increase in renewable energy capacity to 102 GW the generation had increased to roughly 12 per cent and so, it means that we need to increase this to meet the 50 per cent electricity generation target by 2030.India’s power requirement in 2030 is projected to be 2,518 BU and if we target to meet 50 per cent of our requirements from renewables, then the installed capacity will have to increase from the planned 450 GW to 700 GW. If we consider hydroelectricity as part of renewables — as it is considered globally — then we will need to increase new renewable capacity to 630 GW. This is definitely achievable. India’s target and energy plan for 2030 also implies that India will restrict its coal-based energy; currently, roughly 60 GW of coal thermal power is under construction and in the pipeline. India’s coal capacity will be 266 GW by 2030 — which is an addition of 38 GW (which is roughly, what is under construction currently). This means India has stated that it will not invest in new coal beyond this.

3. India will reduce projected carbon emissions by 1 billion tones (Gt) from 2021-2030
This is the third challenge. India’s current CO2 emissions (2021) are 2.88 Gt. According to the Centre for Science and Environment (CSE)’s projections based on the median annual rate of change in the past decade 2010-2019, India’s generation in a business-as-usual scenario will be 4.48 Gt in 2030.According to this target, India will cut its carbon emission by 1 billion tons (1 Gt) and therefore, our emissions in 2030 will be 3.48 Gt. This means that India has set an ambitious goal to cut its emissions by 22 per cent.

4. Carbon intensity reduction by 45 per cent
Carbon intensity measures the emissions of CO2 of different sectors of the economy and demands that these are reduced as the economy grows. According to CSE’s observations, India has achieved 25 per cent of emission intensity reduction of gross domestic product between 2005 -2016, and is on the path to achieve more than 40 per cent by 2030.But this means that India will have to take up enhanced measures to reduce emissions from the transport sector, the energy-intensive industrial sector, especially cement, iron and steel, non-metallic minerals and chemicals. It would also require India to reinvent its mobility systems so that we can move people, not vehicles — augment public transport in our cities and improve thermal efficiency of our housing. All that is in our best interests.

5. Net Zero by 2070: A big challenge to developed countries and China
According to the IPCC, global emissions must halve by 2030 and reach Net Zero by 2050. Given the enormous inequity in emissions in the world, the Organization for Economic Cooperation and Development (OECD) countries must then reach Net Zero by 2030, China by 2040 and India and the rest of the world by 2050.Therefore, India’s Net Zero target of 2070 is an extension of this and cannot be argued against.

So, according to Global Climate Change experts, India can achieve Net Zero emissions by 2070 and most of the other targets laid by PM Modi at the COP26Global Forum. But will India really be a global leader of Climate Change, only time will tell. It requires both a political resolve that PM Modi has shown and Public Support which must come, sooner not later.

Global Climate Change Effects
Climate change transforms global ecosystems. It affects the very life on the Earth. The Global Risks Report 2021 of World Economic Forum clarifies that unless we minimise the adverse effects of climate change, it  is “the most impactful” risk facing communities worldwide higher than the weapons of mass destruction and water crisis. The key effects of Climate Change and Global Warming are:

Disturbed Weather
The recent changes in climate are causing higher temperatures that worsen and increase the frequency of many types of disasters, including storms, floods, heat waves and droughts

Polluted Environment
With the rise in earth temperature, the air gets polluted and dirtier. Also it gets filled with more allergenic pollutants, such as circulating mold, floods and pollen

Health hazards
The World Health Organization has emphasized, “Climate change is expected to cause approximately 250,000 additional deaths per year” between 2030 and 2050. With the rise in global temperature fatalities from heat stress, heatstroke, and cardiovascular and kidney disease would happen.

Endangered Ecosystem
Many species are seeking out cooler climates and higher altitudes, altering seasonal behaviours due to climate change which is increasing pressure on wildlife to adapt to changing habitats. It will impact entire ecosystem. According to a 2020 study, one-third of all animal and plant species could face extinction by 2070. Another study showed that mammals, fish, birds, reptiles, and other vertebrate species are getting eliminated faster. In early 2021, experts issued a report with illustrations and urging simultaneous action on both fronts.

High Rising Seas & Disturbed Marine Life
Seas & oceans absorb one-third of fossil fuel emissions and are now 25-30% more acidic than they were two three decades ago. This poses a serious threat to marine life. Rising sea temperature is also altering the range and population of underwater species. The Arctic Ocean is heating up twice as fast as any other place on the earth as its ice sheets melt into the seas. The oceans are expected to rising from 0.95 to 3.61 feet by the end of this century, threatening coastal ecosystems and low-lying areas.

Moving to Clean & Renewable Energy
Clean and renewable energy sources like solar and wind are not only cheaper but are also non-hazardous and risky. The auto makers around the world are working to develop new technology to run non polluting battery operated cars to reduce pollution from gas powered cars. This will help to sustain a cleaner and pollution free environment

Industries to Run on Clean Energy
The concept of clean energy based industries has started but is yet to spread its wings across the world. In some parts of United States of America like Californa, Lowa industries have started operating with cleaner and renewable energy fuels like solar and wind.

The world is thinking and moving up to achieve net-zero emissions by 2040. Although it is the mammoth task, but the initiative has been taken and with concerted efforts the Global climate problems can be solved by taking firm steps.  Read More GD Topic