MBAUniverse.com News Desk | :
November 25, 2013
This is the second article in the series of GD PI WAT preparation for MBA Admission 2014. This article is on the GD Topics Corruption is the root cause for Indian Economy slowdown to help you prepare for your GD rounds. 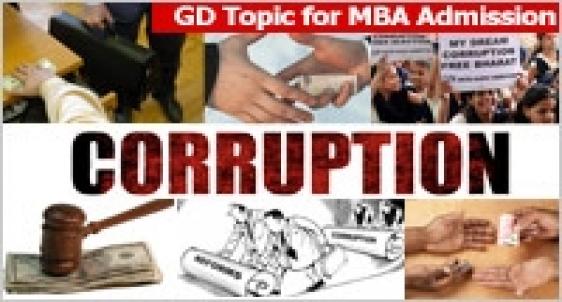 Aspirants are suggested to read the article, form systematic pattern to present the same instead of putting forward scattered presentation

This article is based on the GD Topics “Corruption is the root cause for Indian Economy slowdown” to help you provide inputs for your group discussion rounds.

Our last article in this series was:
GD Topic for MBA: The rise in vegetable prices is a man made farce

Background
The topic has two parts – A. The rampant corruption in India and B. Its adverse impact on growth of economy. MBAUniverse now takes you a step further with certain hot and specific view points to sharpen your penetration on this contemporary discussion.

Arguments for the topic
Lot of material is available supporting the topic in the form of newspapers, periodicals, books, electronic media etc. The aspirant is suggested to read the same, form systematic pattern to present the same instead of putting forward scattered presentation.

1. Transparency International in its study on index of corrupt countries in 2012 placed India at 94th rank out of 176 countries while Somalia tops the list. Corruption in all walks of life in India is making it weak and has adverse impact on its growth. As per an estimate 80% of the public servants in India are corrupt because of which the wheel of growth is being pulled down.

2. The Constitution of India describes the country as “Sovereign Socialist Democratic Republic” leading to socialist-inspired policies for an entire generation from the 1950s until the late 1980s. Extensive protectionism in Industry, license Raj had contemporary policies vulnerable to pervasive corruption and slow economic growth, Rajagopalachari"Chakravarthi Rajagopalachari always stated that the system of License Raj would remain at the core of corruption and would pull back the economic growth in the country.

3.How does the growth is adversely affected due to rampant corruption - the former Indian Union Home Secretary, N.N. Vohra, in October 1993, submitted a report on corruption in politics and its criminalization. Politicians have the nexus with criminals. This criminal network is running a parallel government and satisfying the selfish ends of vested interests. More than 100 Members of Parliament are facing charges of corruption or related criminal charges. Public money which has otherwise been utilized for the growth of economy and for welfare of the public was misused to satisfy the greed of such networks.

4. The people have to pay bribe to get a job done in a public office. Taxes and bribes are common between state borders. As per an estimate more than Rs. 24,000 crores is paid in bribes. Government regulators and police share in bribe money, Transporters have to pay bribes to cross the state borders within the country and this phenomenon can be witnessed at any state border including the capital. These stoppages including those at checkpoints and entry-points take up to 10-12 hours in a day. This is despite the fact that many of the sates have done away with many taxes or the same have been made centralized. About 60 percent of these (forced) stoppages on road by concerned authorities such as government regulators, police, forest, sales and excise, octroi, weighing and measuring department are for extorting money. The loss in productivity due to these stoppages is an important national concern. The number of truck trips could increase by 30 to 40%, if forced delays are avoided. According to a World Bank report, the travel time for a Delhi-Mumbai trip can be reduced by about 2 days per trip if the corruption and associated regulatory stoppages to extract bribes was eliminated.

5. Various government officials, politicians in connivance with Criminals tend to grab the public property illegally. This land and property is meant for infrastructural or community development. These activities hamper the growth of economy.

7. Corruption caused problems in government funded projects are rampant almost in all the states. Only 40% of grain handed out for the poor reaches its intended target. The World Bank study finds that the public distribution programs and social spending contracts have proven to be a waste due to corruption. MGNREGA, (Mahatma Gandhi National Rural Employment Guarantee Act), NRHM (National Rural Health Mission), and other such programmes have become controversial as poor quality of infrastructure is built, Poor is still poor to the same level, Funds assigned for rural health care and Medicines are misappropriated. Corruption, waste and fraud-related losses from this government program has been alleged to be around Rs.10, 000 crores.

8. Mineral resources are the back bone to the prosperity of the country. The corrupt Ministers and government officials of such states go for awarding illegal mining of such rich resources. They illegally help transport the minerals like coal, iron ore, bauxite, copper, etc. to other places for their personal benefits. The economic growth is severely affected by such corrupt activities.

9. According to a report corrupt officials in India may be making the country poorer by more than Rs.90, 000 crores every year, (More than 1% of the GDP, through corruption) These politicians, corrupt officials and business associates have black money in Swiss banks to the tune of Rs. 10,000 crores or more depriving the Indian Economy of its path on sustained growth,

10. Such corruption leads to further bureaucratic delay and inefficiency. Corrupt politicians and bureaucrats may introduce ways and means to extract more money affecting institutional efficiency. This would affect growth indirectly. Corruption also results in lower economic growth for a given level of income. With the reduction in Corruption level in India the growth rate of GDP might increase by 5 to 7%. As per an estimate the rampant corruption in India causes loss of growth in terms of investment and employment by Rs.25000 crores.

Arguments against the topic
Please remember we can find more core points and arguments for the topic. You cannot say that India is a corruption free or very less corrupt country nor you can deny the facts placed with the support of reports and data. Hence you must present the things like causes, remedies, and other favorable making it a point that the things are not flimsy or should not contradict your own points.
1. The history of corruption in India is not new. Even during the regime of East India Company in 17th Century it was a serious issue. The economy has been running infected since then. To make India corruption free it is important to explore the root causes of corruption in India which includes excessive regulations, complicated taxes and licensing systems, numerous government departments infested with bureaucracy and discretionary powers, monopoly by government controlled institutions. These features cater to the corruption on one hand and the lack of transparent laws and processes put the public at the receiving end. However, corruption varies from state to state and place to place, from man to man. Those who have the knowledge of rules and regulations find it easier to keep the corrupt away from indulging in corruption while for others it is difficult.
2. India has wide spread illiteracy. To weed out the corruption and to put the wheel of growth on right track, Education is the basic requirement. Suitable law requires to be passed to make it a fundamental right as well as fundamental duty of the state to impart education to each and every person in the state.

3. The fight against corruption to accelerate the growth has time and again been taken up by eminent social workers, activists like Anna Hazare, NGOs etc. Various stringent bills to rein in the corruption are already present in the country like Indian Penal Code 1860, The Prevention of Corruption Act 1988, Prevention of Money Laundering Act 2002, and the proposed Jan LokPal Bill etc. Various Departments and organizations exist in the country to prevent corrupt practices e.g. Central Vigilance Commission, CBI, Lokayukta, etc.

4. Although it is a fact that corruption should be curbed, at times it speeds up the processes also.  People find it difficult to get their jobs done in the countries where no corruption exists. It takes many days to get the Visa to many countries and years to get the green card in USA. Professionals, their relatives complain that the process takes a very long time and since no one takes bribe in USA the process goes on its pace. How would it be, if the same processes were in India? One could get it processed faster by spending some extra money.

5. There are thousands of public servants and other officials who have never taken any bribes in their life. They worked for the betterment of their organization and the country. They have never been corrupt but always remained at the receiving end of their corrupt seniors and juniors and were trapped in one or other way. The punishment went to the honest while corrupt remained free. Such good officials need to be protected to avoid further spread of corruption.

6. India has co-existence of private and public sector. While private sector is surging ahead and has been providing low cost products and services e.g. transport, travel, courier, communication, consumer goods etc., the public sector, controlled by the government has been moving slowly.  This is despite the fact that private sector has to face all the red tapism, has to bribe the officials and politicians –still can work faster and contributes more to the economy.

Make a positive approach to conclude – P S Bawa, Chair of Transparency International India, stated “Corruption is a hydra-headed monster and governments have to make efforts to tackle it from all sides. This can only happen if all stakeholders work together," the efforts being taken by the watchdog to create awareness about corruption among people and steps being implemented to curb the menace have to be intensified to achieve a higher growth rate and improve the image of the country creating a better environment for investment and employment. India requires a transparent and effective policy implementation with more employment and business opportunities to curb corruption and move fast on the path of growth.