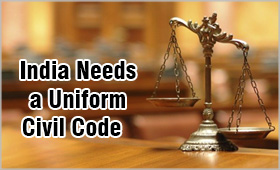 The disparities and atrocities on women before or after marriage, the issue of ‘triple Talaq’ across the country has flared up the necessity of Uniform Civil code in the country to protect the civilian rights.

It is mentioned in the Article 44 of the Indian Constitution that “the state shall endeavor to secure for the citizens a uniform civil code throughout the territory of India”.  In the light of the Indian constitution’s article 44 it is always asked whether it is not a high time that India adopted a uniform civil code. Personal laws are civil laws which deal with matters such as marriage, divorce, custody, adoption, inheritance etc. The article being one of the directive principles of the state policy clearly be “endeavored” rather being forced upon any community or communities.  But there are many essential questions to be addressed before such a code can turn into reality.

Need for a uniform civil code
Almost all the countries of the world have a common civil code for all their citizens. The basic idea behind the formulation of a uniform civil code is to end discriminations based on religions. Personal law of nearly all the religions have acted as a tool of oppression of the women through which they are suppressed most of the times citing religious and social obligations. Personal laws have always played a big role in causing the rise of gender discrimination. Uniform civil code guaranteed by the constitution has also become a very sensitive and controversial issue which has always been communalized by people having vested interests.

Different rules of civil law go against the secular credentials of the republic and also challenge the concept of unity in diversity.  In a diverse society like India the laws needed to deal with the disputes related to the issues of marriage, divorce, custody, adoption, inheritance need to be same for all irrespective of religion, caste or sect. At a time when reforms for strengthening the position of women in the society are being given the utmost significance and attention, there is an urgent need for a new civil code to eliminate discrimination against women in the society.

It is necessary that law be divorced from religion. With the enactment of a uniform code, secularism will be strengthened; much of the present day separation and divisiveness between various religious groups in the country will disappear, and India will emerge as a much more cohesive and integrated nation.

The crusade for the implementation of the uniform civil code should get the support of all progressive and right thinking citizens of the country. It is the need of the hour. There is also need for a political consensus to implement the uniform civil code. In a nutshell, uniform civil code is necessary to effect an integration of a country as diversified as India by bringing all the communities into a common platform which do not form the essence of a single particular religion. A uniform civil code will also enforce the idea of secularism enshrined in the Indian constitution more forcefully... Read More GD Topics