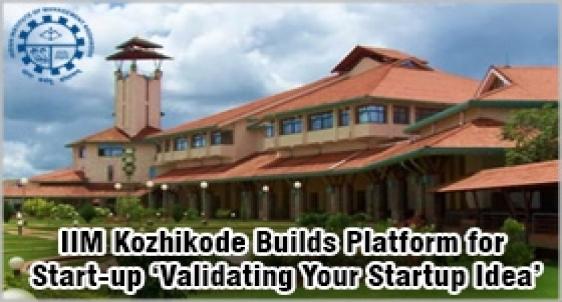 IIMK LIVE at IIM Kozhikode is committed to promote entrepreneurship among the community on campus and the greater community and would be open to associate with those committed to similar mission Keyoor Purani, Faculty, IIM K and Executive Director I

Speaking at the event, Keyoor Purani, Professor at IIM Kozhikode and Executive Director of IIMK LIVE said “Northern Kerala is fast changing in terms of its outlook to economic activities and this is the most appropriate moment to create start-up ecosystem in the city.  IIMK LIVE at IIM Kozhikode is committed to promote entrepreneurship among the community on campus and the greater community and would be open to associate with those committed to similar mission”.

The event saw participation from more than 300 registered start-up enthusiasts. Sandith Thandasherry, CEO, NavAlt Solar & Electric Boats and Ujjwal Trivedi, Sr. Product Manager, CouponDunia.com shared their experiences with the audience.  The participants deliberated and discussed on how to validate a start-up idea.

Headstart Network Foundation, a non-profit organization on the mission to ‘Change the World through Entrepreneurship’  is India's largest grass root level organization that supports entrepreneurship and startups and has chapters in more than 20 cities across India.

LIVE is a business incubator and entrepreneurship development centre of IIM Kozhikode with the support of Department of Science and Technology, Government of India. Established in June 2016, the centre is envisioned to function as a business incubator with a purpose of creating a National Centre of Excellence that promotes innovation, new business venturing and entrepreneurship. Towards this, it seeks to emerge as a collaborative platform that help transform innovative ideas into business ventures that make significant economic and social impact.

Started in 1997 with its Postgraduate Programme (PGP), the Indian Institute of Management Kozhikode (IIMK) is on a high growth trajectory today, offering widest range of academic programmes in the field of management education. These include Fellow Program in Management, Executive PG Programs, Management Development Programs and Faculty Development Programs. IIMK set up a Satellite campus at Infopark, Kochi, in 2013 dedicated to Executive Education