MBAUniverse.com News Desk | :
October 31, 2013
In its ongoing series to make the B school aspirants familiar with other prestigious management exams in the wake of CAT 2013 nearing its end, MBAUniverse.com comes up with the key inputs on NMAT 2014 Exam pattern and NMAT paper Pattern. 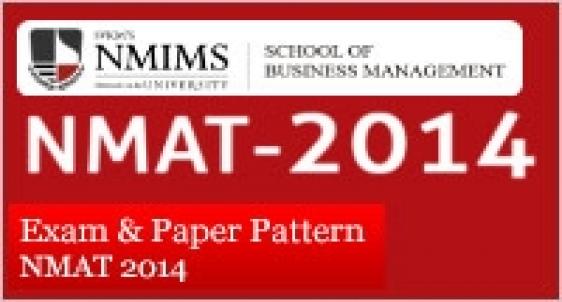 Perform well in each of the 3 sections of NMAT as the score of each section and the overall score will be used to shortlist the candidates.

In its ongoing series to make the B school aspirants familiar with other prestigious management exams in the wake of CAT 2013 nearing its end, MBAUniverse.com comes up with the key inputs on NMAT 2014 Exam pattern and NMAT paper Pattern. The first exam covered in the series was XAT 2014. The difficulty level of NMAT 2014 exam pattern is on the easier side when compared to CAT or XAT. NMAT 2014 Paper pattern consists of Language skills, Quantitative Skills and Logical Reasoning.

NMAT is the entrance exam of SVKM's Narsee Monjee Institute of Management Studies. The test delivery windows are open from October 5, 2013 till December 18, 2013. The test taker can take the exam thrice. The first scheduling dates for NMAT 2014 have already ended on October 10, 2013 while the rescheduling dates are from July 17, 2013, to December 15, 2013.The registered students of NMAT 2014 will get a third opportunity to attempt the test, rescheduling of which started on October 5, 2013 and will end on December 17, 2013. The results will be announced on January 23, 2014, while the first merit list will come out on March 5, 2014.

NMAT 2014, conducted by Pearson Vue, has become computer based test from 2010.

NMAT 2014 paper pattern is different from other MBA exams. NMAT 2014 is an objective type multiple-choice test. The total time given for the test is 120 minutes to solve 120 questions. There are no descriptive type questions. The difficulty level of NMAT exam pattern is on the easier side when compared to CAT, XAT and IIFT. NMAT 2014 Paper pattern consists of the following:

1.  Language skills: This section has 32 questions and a time of 22 minutes is given to solve them all.

2.  Quantitative Skills: This section carries 48 questions which are to be solved in a time period of 60 minutes.

3.  Logical Reasoning: Carries 40 questions which are to be solved in 38 minutes.

It is important for the students to perform well in each of the 3 sections of the NMAT 2014 paper pattern as the score of each section and the overall score will be used to shortlist the candidates for the second stage of the selection process as well as in the final ranking. There is no negative marking in the NMAT 2014 Exam Pattern.

Each of the three sections of the NMAT 2014 Exam Pattern is individually timed and candidates can choose the section sequence.

As per the eligibility criteria candidates having full time Bachelor's Degree (10+2+3/4) in any discipline from a UGC recognized University with minimum 50% marks in the aggregate in first attempt are eligible to apply for NMAT 2014.  The candidates who have cleared their graduation by doing a part-time course or through distance learning, correspondence courses, externally, open school are not eligible to apply. Only shortlisted candidates will be allowed to participate in written Test, Case Discussion (CD) and Personal Interview (PI). Candidates can apply for more than one Programme/Campus as per their eligibility by giving preferences.

If a candidate is not satisfied by his NMAT 2014 score in the first attempt he may schedule for Re-take NMAT. In case of candidates taking more than one attempt the best score which is the total score & its respective sectional score, which make the candidate eligible as per the cut offs declared by NMIMS, will be considered for short listing for subsequent process. Sectional as well as total scores are included in cut offs.

In view of Prof. S.K. Agarwal, seasoned trainer and Verbal expert 'All the three sections in NMAT 2014 paper pattern are equally important as you have to be well above sectional as well as overall cut off in this test. If you are serious enough and have prepared well for CAT and XAT you must continue in the same spirit. Most of the questions are similar and based on the same concepts of English language, Quantitative Ability, Logical Reasoning as appear in both these examinations; the need is to improve your attempts in limited time.  NMAT paper pattern has 120 questions in all to be answered in 120 minutes, so time management is very important. Policy of no penalty for wrong answer will give you an edge although the cut off will be high.'

NMIMS Offers a wide range of MBA programs, both general management and specialized areas, to suit industry requirements which are as follows.

1.  NMIMS flagship MBA programmes having 360 seats. It is a two year full time programme having concentration in any one particular area:

MBAUniverse.com gives you a detailed analysis of all other MBA exams after CAT 2013 including XAT 2014, NMAT, SNAP, IIFT and IBSAT.

To know the complete list of leading B schools in Mumbai, visit MBAUniverse.com MBA in Mumbai city page.

Stay tuned to MBAUniverse.com for more news and updates on MBA Entrance exams