MBAUniverse.com News Desk | :
October 31, 2013
In its ongoing series on leading B schools, MBAUniverse.com comes brings you latest information about Indian Institute of Foreign Trade IIFT Delhi. This article will also brief you about IIFT 2014 Exam pattern and IIFT 2014 exam date 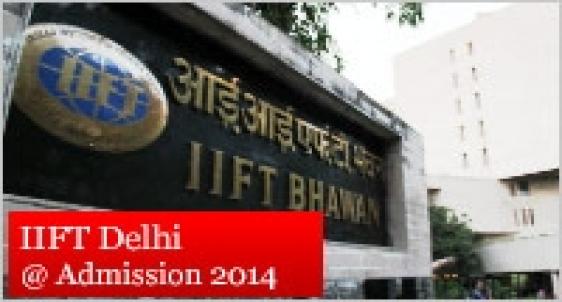 Average salary offered to the students at IIFT 2013 Placements being Rs 12.1 lakhs and the highest salary of Rs 22 lakhs

In its ongoing series to help the B school aspirants explore leading management institutes of the country MBAUniverse.com comes up with the latest valuable information about Delhi based Indian Institute of Foreign Trade (IIFT).

IIFT Delhi was set up by the Government of India as an autonomous organization to help professionalize the country's foreign trade management and increase exports by developing human resources; generating, analyzing and disseminating data; and conducting research. IIFT Delhi has a portfolio of diverse long-term programmes, catering to the requirements of aspiring International Business executives and mid-career professionals alike.

According to the Director of IIFT Delhi, Dr. Surajit Mitra, ‘’over the years IIFT has achieved not only 100 per cent placement of its students, but also with companies of repute and significance.  This is a great complement not only to IIFT but also to the intelligent and hard working student community who participated in our programmes’’.

The total fees of IIFT are 14.16 Lakh which includes tuition fees and hostel fees.

IIFT Delhi 2013 Placements : Up to the mark
IIFT Placement 2013 witnessed 200 students placed out of a batch of total strength of 210 with a total number of 74 companies visiting the campus for placements. They made a total of 200 job offers.10 students of the 2011-13 batch opted out of the placements. The average annual salary offered to the students at IIFT Delhi was Rs 12.10 lakhs while the highest annual domestic salary was Rs. 22 lakhs. The international recruiters offered an average annual package of 22.34 lakhs. IIFT also saw the highest number of pre placement offers ever with 46 per cent up by more than hundred percent receiving offers from industry stalwarts like AT Foods , Britannia, CEB, Citibank, CBC, Coalgate Palmolive, DBS, Flipkart, GCPL, Goldman Sachs, ITC, Madura F & L , Mahindra and Mahindra, Nomura Holdings, Proctor and Gamble, Reckit Benkiser, Tata Motors, Tata Steel and Vodafone.

Some of the Recruiters at IIFT Placement 2013:

IIFT 2014 admission procedure is a 3-stage process: First is the written test i.e. IIFT 2014 exam covering areas of Quantitative Ability, Logic and Reasoning, English etc. The short-listed people will then have to appear for the Group Discussions and Essay Writing. The final round consists of Personal Interviews. IIFT 2014 exam will be held in following 20 cities all over India.

For any doubts and queries related to the exam pattern, preparations and other related queries about MBA entrance exams like CAT, XAT, NMAT, SNAP, CMAT and MBA Admission 2014, click here http://www.mbauniverse.com/mbau_faq/client.php.

To know the complete list of leading B schools in Delhi, visit MBAUniverse.com MBA in Delhi city page.

Stay tuned to MBAUniverse.com for more news and updates on B schools in Delhi