MBAUniverse.com News Desk | :
November 11, 2013
Essay Writing plays an important role both in XAT 2014. To guide the aspirants through this tricky module, MBA Universe brings out a series of articles, this being the first one, on XAT 2014 Essay Writing and WAT in IIMs 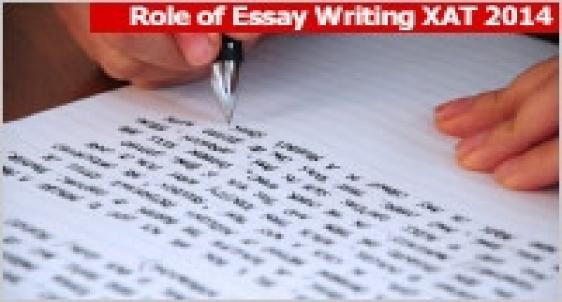 XAT 2014 and CAT 2013 both award great importance to the writing ability of future managers and accordingly place high weightage to this test.

Essay Writing plays an important role both in Xavier Aptitude Test 2014 and CAT 2013, and a lot depends on it in finalising the admission to the desired Management College. To guide the aspirants through this tricky module, MBA Universe brings out a series of articles, this being the first one, on XAT 2014 Essay Writing and WAT in IIMs. While the Essay Writing Test is part and parcel of XAT 2014written examination, WAT (Writing Ability Test), a key factor in admission to various IIMs and other top B schools who accept CAT scores, is conducted after CAT examination and at the time of finalising the admission.

There is almost negligible difference between XAT 2014 essay writing and Writing Ability Test in IIMs with the exception that Institutes associated to Xavier Aptitude Test 2014 do not have any choice on their own in opting for or discarding this test whereas CAT B schools conduct WAT individually in their final admission round.

Evaluation of XAT 2014 Essay Writing
XAT 2014 Essay Writing is a 20 minutes’ test. Final selection depends on it and if written with a clear and coherent flow of thought with rich contents, may get the candidate through the last round of admission procedure. Evaluation of XAT 2014 essay Writing is done after the candidate has qualified the MCQ test. The score and the thought expressed in essay then serve as a ground for the selection in B schools listed in XAT 2014.

Expect the questions in PI
The crucial role, this essay writing plays, is the candidate’s ability to face the Board and answer the penetrating questions, based on whatever was expressed in the essay. The piece of advice is not to write anything superfluous or biased which is confusing and is difficult to explain.

Weightage of XAT 2014 Essay Writing
According to Prof. S.K. Agarwal, Verbal Ability Expert ‘XAT and CAT both award great importance to the writing ability of future managers and accordingly place high weightage to this test’. Although the percentile is based on MCQ test in XAT, total marks cannot be awarded without obtaining marks in Essay Writing Test. Its weightage becomes more prominent in final admission round.

Both the General Awareness and Essay Writing sections are of 20 minutes duration each and do not figure in calculation of percentile. Each of them has a weightage in a range of 15-30 percentage points which is substantial to secure the seat in a very good B school in final selection round. XLRI Jamshedpur, SPJIMR Mumbai; XIM Bhubaneswar; IMT Ghaziabad; TAPMI; LIBA Chennai and other coveted B schools are very particular on taking into account the obtained scores of XAT 2014 Essay Writing.

Writing Ability Test (WAT) in CAT
WAT (Writing Ability Test) has and shall be a key playing factor in getting the admission to an IIM and other top B school associated to CAT. Since WAT is not a part of CAT on line computer based test and therefore IIM Ahmedabad; IIM Bangalore; IIM Lucknow; IIM Calcutta and other IIMs as well as non IIMs individually put the candidate to take this test in a time duration from 15 to 30 minutes.

The expectation is to understand the topic in accordance with its key words and then form the piece of writing in a logical and coherent manner without beating about the bush. It accounts for 10 to 20 percentage points in final admission round. Candidates may expect questions in their Personal Interview round out of their written essay of 300 to 400 words.

IIFT 2013 as well
It is not only XLRI or IIMs that are inclined to test the Writing Ability of the aspirants. Indian Institute of Foreign Trade (IIFT) is yet another important B school that wouldn’t allow admission without putting the candidate to this skill test.

The WAT at IIFT 2013 has a duration of 15-20 minutes and ideally candidates are supposed to sum up their writing in 300 to 400 words. The topics are mostly based on current affairs, socio political happenings, business and economics, International affairs, abstract ideas on philosophy and so on.

Stay tuned to MBAUniverse.com for more updates on XAT 2014 and other MBA exams.