MBAUniverse.com News Desk | :
December 12, 2013
The much awaited CAT 2013 results will be announced on January 14, 2014. While talking to MBAUniverse.com CAT 2013 convener Dr Rohit Kapoor of IIM Indore shared this information. 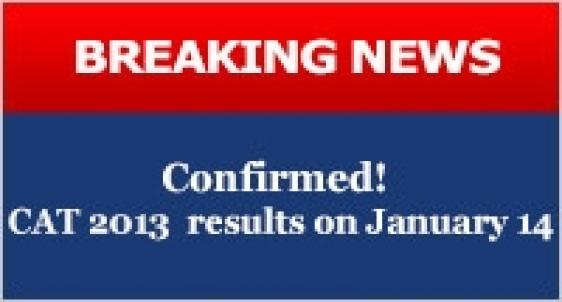 "I would like to wish best of luck to the students for their CAT 2013 results and a very bright future": Dr Rohit Kapoor.

The much awaited CAT 2013 results will be announced on January 14, 2014. While talking to MBAUniverse.com CAT 2013 convener Dr Rohit Kapoor of IIM Indore shared this information. He said that the CAT 2013 result date was final as of now from their side.

Sharing his experience as CAT 2013 convener Dr Kapoor said that it was a great and enriching experience. He said that there have been two improvisations in CAT 2013 application process, one was the introduction of online vouchers and the other was the launch of a new domain for the convenience of the students’ registration in just a short span of time. With improvisation on the two levels, Dr Kapoor said that the report card of IIM Indore with regard to CAT 2013 was very strong.

CAT 2013 saw a decline of over 9% in its registrations from CAT 2012. Total registrations for CAT 2013 closed at around 194,516 while CAT 2012 registration was at 2.14 lakhs. The CAT 2013 aspirants took the test in a 20-day test window between October 16 and November 11, 2013. Not all the registered number of candidates took the CAT 2013 and the total number of absentees in the test was more than twenty thousand. Revealing the facts, IIMs and Prometric had also admitted that although 194,516 was the number registered for CAT 2013 but actual test takers were only 173,738.

Talking about the dip in the number of CAT 2013 test takers Dr Kapoor said that the dip in number of the CAT test takers was because of the economic slow down and it’s not going to affect the IIMs as they get only such students who are serious about achieving their goals of getting into IIMs in all circumstances.

“I would like to wish best of luck to the students for their CAT 2013 results and a very bright future”, said Dr Kapoor.

CAT 2013 results will be announced on January 14, 2014. Nearly 173,738 MBA aspirants are eagerly waiting for their CAT 2013 results to take admission in top B schools including IIMs.

Stay tuned to MBAUniverse.com for more news and updates on CAT 2013 results