IIM Admission criteria 2014: How to get shortlisted for seven Older IIMs?

MBAUniverse.com News Desk | :
December 20, 2013
This article will share with you a comparative analysis of the admission policies of the top 7 older IIMs. 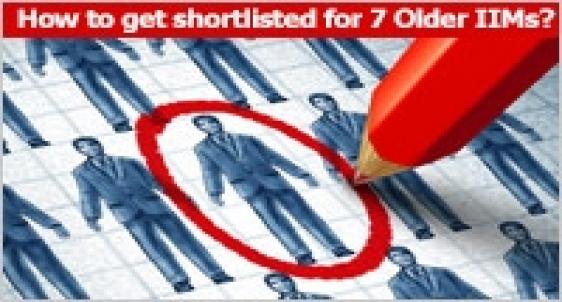 The admission process is conducted in two stages. In the first stage, candidates are shortlisted on the basis of their CAT 2013 scores or the past academic records.

The admission process is conducted in two stages. In the first stage, candidates are shortlisted on the basis of their CAT 2013 scores or the past academic records. The next stage is that of the final selection, which takes place through the performance in the WAT, PI or GD and other factors like past academic performances and work experience.

The CAT 2013 cut off for the Seven older IIMs are as follows:
Only those students who satisfy the following sectional minimum percentile and overall percentile scores in CAT 2013 will be considered for further short listing process at respective IIMs. This is the first step of short listing meant to arrive at a consideration pool. These cut offs are not for those called for interview whose scores would be much higher. These percentiles are the minimum percentile scores to be called for initial screening or Stage 1 called as short listing to get a large pool of candidates to select from.

Stage 1: Short Listing stage for the 7 older IIMs are as follows:

The candidates satisfying the minimum eligibility criteria mentioned in Table 1 will be considered for further short listing for WAT and PI.

This is one of the crucial stages of selection process and every IIM gives its own weightages on different factors. Let us have a look at the factors which will be considered for short listing of students for the first stage at 7 older IIMs in Admission 2014:

IIM Kozhikode was the pioneer in promoting women in management education. They have reserved 35 per cent seats for women. Gender diversity weightage is provided to female candidates to sustain the gender ecology in the campus.

Table 2: Weightages of Factors used in Short Listing stage of IIMs for Admission 2014

IIM Kozhikode only considers graduation marks for 12% weightage while IIM Bangalore give 40% weightage in the short listing stage.

Gender diversity weightage is provided to female candidates to sustain the gender ecology in the campus. IIM Kozhikode gives a total of 5 % weightage followed by IIM Calcutta 3 and IIM Lucknow 3%.

Academic diversity weightage is provided to all those candidates who have done their graduation and post graduation from any stream other than engineering (such as BA, B.Com, B.Sc, BCA, BBA, B.Pharma, etc).