MBAUniverse.com News Desk | :
December 20, 2013
This is the eighth article in the series of GD PI WAT preparation for MBA Admission 2014. This article is on the Topic "RBI's new governor has taken adequate steps to improve Indian Economy" to help you prepare for your GD PI WAT round at Admission 2014. 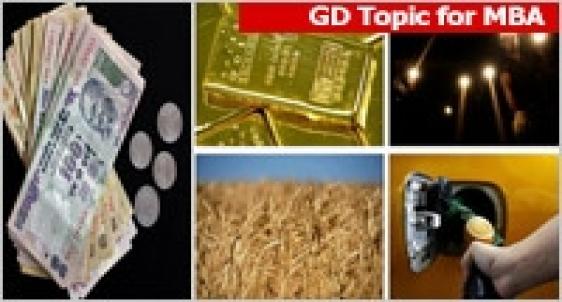 Ever rising prices have shaken the confidence in the money market which has to be established.

This article is based on the GD Topic “RBI's new governor has taken adequate steps to improve Indian Economy” to help you provide inputs for your group discussion rounds.

This article is based on the GD Topic “RBI's new governor has taken adequate steps to improve Indian Economy”.

Ideally a country’s economy is controlled by two types of economic measures– Fiscal and Monetary. While Fiscal policy is framed and implemented by the government with regulation of its spending and collection of revenue, the monetary policy is controlled by the Central Bank of the country (in India it is the Reserve Bank of India).

Background
Falling value of Indian currency in terms of foreign currency was causing inflation. Imports were getting costlier. Exports were not picking up for want of raw material. Corporate sector, stock and money markets were moving with lot of uncertainty. Economy was not in good shape as a whole.

Reserve Bank of India, the regulatory authority on money supply and circulation also was of not much help.

Key Points
To resolve the Crisis of falling Rupee, Mr. Raghuram Rajan took over as RBI Governor on September 4, 2013. He is the twenty third Governor of the apex monetary authority and is appointed for a period of three years.

Mr. Rajan has served as Chief Economist with IMF from 2003-2007 and Chief Economic Advisor to the Finance Ministry in August 2012. He is a gold medalist of IIT Delhi and of IIM Ahmedabad.  He did his PhD in 1991 from Massachusetts Institute of Technology.

Task Ahead
New Governor is expected to revive the Indian Economy and check the falling Rupee value as well as increasing current account deficit to improve the balance of payment position.

Ever rising prices have shaken the confidence in the money market which has to be established. The slow economic growth is another challenge which is to be taken care of.

Arguments for the topic
Benchmark indices reclaimed their key levels in trade a day after Dr. Raghuram Rajan took charge as the new Governor of the Reserve Bank of India (RBI). Sensex rallied about 550 points in intraday trade. It sends positive signals for Indian Economy.

A series of measures was announced to restore confidence among investors in India. The governor emphasised on a push for more international settlements in rupees and further liberalization of our financial markets.

The governor made major announcements relating to banks. With a view to accelerating long-pending reform issues, steps like branch licensing, priority sector lending (PSL) and statutory liquidity ratio (SLR) reduction would be undertaken in the coming months.

With a view to control inflation Policy rate was increased by 0.25%. Bench mark interest rate as such has been increased from 7.25% to 7.50%. However, to improve liquidity with the banks marginal standing facility rate (MSFR) at which Banks borrow from RBI was reduced by 0.75% to 9.5%.

The repo rate or the short term lending rate has been increased by 25 basis points to 7.5% from 7.25% with immediate effect to control the money supply. It will increase the interest rate on lending as well as on deposits.

The cash reserve Ratio (CRR), the portion of deposits that banks are required to maintain with RBI in cash has been kept unchanged at 4%. To induce liquidity into the system, RBI reduced the minimum daily maintenance of CRR from 99% of the requirement to 95% effective from September 21.

His string of measures to liberalize financial markets and support the currency helped the rupee bounce back, reaching about 62 against the US dollar, from 67 when he took charge.

All the above steps and other steps to be taken in coming months target for the robust economic growth of the country after smart recovery.

Arguments against the topic
The measures taken by the RBI appear inadequate. Rupee which became stronger has again gone on sliding trend and is hovering around more than Rs. 63 per US dollar.
Stock market had a great fall after announcement of increase of increased repo rate.

Indian money market has already been suffering from high lending rates which have further been increased. Housing which is the most sought after sector has suffered a great set back due to these measures.

Almost all the measures announced are quantitative in nature and not qualitative. They will have general impact without any discrimination. Rich will become richer and poor will become poorer.  The commodity market has not improved. The need is to take certain qualitative and discriminative steps targeting particular sections and areas of the economy.
Current measures do not take into account the distribution aspect of social economic scenario.

The taxation policy of the government should also be made coherent to bring out the desired result from monetary measures. More deficit financing by the government will increase the money supply, increasing the level of inflation.

Conclusion – Positive note is expected
RBI has taken many positive steps to stabilise and to put the economy on the path of growth, still number of measures need to be deployed for better economic recovery and growth.