MBAUniverse.com News Desk | :
December 23, 2013
This is the ninth article in the series of GD PI WAT preparation for MBA Admission 2014. This article is on the GD Topic "Political activism is the only way to root out corruption" to help you prepare for your GD PI WAT round at Admission 2014 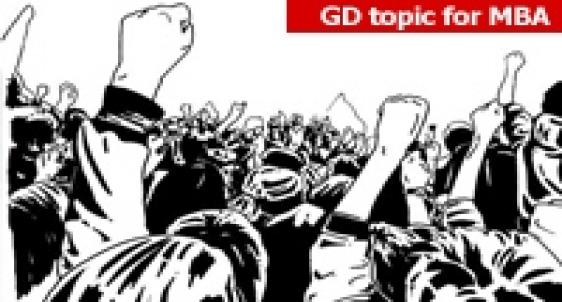 This article is based on the GD Topic “Political activism is the only way to root out corruption” to help you provide inputs for your group discussion rounds.

Lokpal bill has been a hot political topic of India since last couple of years. As it has been passed by country’s Parliament, MBAUniverse.com comes up with this article to make you more aware about the topic which could be one of the main topics in the GD PI round of various B schools during MBA Admissions 2014.

This article is based on the GD Topic “Political activism is the only way to root out corruption”.

As anti corruption/ RTI activist Arvind Kejriwal is all set to become Delhi’s Chief Minister after the stupendous show of his newly formed Aam Aadmi Party in recently held Assembly elections a debate has started whether it is essential to get into the system to root out corruption or it can be done by remaining away from the system and agitating against the government’s anti- people policies.

In 2011 a nationwide anti- corruption movement was spearheaded under the leadership of veteran Gandhian social activist Anna Hazare who through continuous fasts kept on pressuring the Congress led UPA Government to pass the Jan Lok Bill in the Lok Sabha, the aim which was achieved in December 2013 when the Indian Parliament passed the Lok Pal Bill. Anna Hazare accepted the bill passed by the government but it was not accepted by his former close associate Arvind Kejriwal’s Aam Aadmi Party which after the 2013 Assembly elections of Delhi has turned into a powerful political force to reckon with. Both Anna Hazare and Arvind Kejriwal fell apart on the issue of launching a full fledged political party to press for the demand of Jan Lokpal Bill. After Arvind Kejriwal launched  a full fledged political outfit Anna Hazare disbanded the Team Anna which had become a synonym for the anti corruption movement in India.

Arguments in favour of the topic:

1.    Arvind Kejriwal’s rise to power with a promise to root out corruption at various levels is a good sign for the country. It is for the first time the country is witnessing a full fledged political party which has made its stand clear vis a vis corruption in the government offices clear.

2.    It is not easy to change the system by remaining outside. To change a system there is a need for people and politicians having a will to bring the change from within by becoming a part of the system.

3.    Arvind Kejriwal has continuously been emphasizing over the immediate redressal of the problems of common man by organizing meeting with the people at various common platforms. Since the formation of his political party he has extensively been raising the issues which have become reasons behind the agony of the common man like inflation, hike in electricity bill, rise in vegetable prices and many other issues of common man’s interest.

4.    Political activism has played a great role in changing the fortunes of many countries across the world. In India the entire Independence movement itself was a big political movement in which Father of the Nation Mahatma Gandhi spearheaded a peaceful movement against the British rule. Another example can be the Total Revolution Movement of Gandhian Socialist Jayaprakash Narayan which brought the first non Congress government at the centre after Independence in 1977.

5.    The rise of a political force like Aam Aadmi Paty with the help of political activism is a challenge to the fully established institutions. If basic issues of concern of the common man are raised through political activism honestly then they can easily be of immense help for them.

6.    In a democratic set up like India any change like the passing or implementation of anti – corruption bills can be implemented when you are in the system and have authority as well as will to bring about the changes. So only remaining outside the system and agitating is not a wise option.

7.    Talking about the new emerging trend of political activism in India Noble laureate Amartya Sen said , “What Kejriwal has brought to the table is that if one has a few powerful messages, you can win elections with very little money. You can get a party ready fairly quickly to have a stunning debut. He has also given hope and confidence to a lot of people across various cities of the country to say we too can participate in the political process."

1.    Some people like veteran Gandhian social activist Anna Hazare are of the view that if you enter into the system , the political one, then there is no any chance of you remaining untouched from the corrupt practices of the system. For him there is a need to build the pressure for change from outside rather than from within.

2.    It’s very tough to change the system by becoming a part of it. It has been seen in the past that many times the political parties after coming into power have not been able to implement their promises which they made during election campaigns.

3.    There are various road blocks in the functioning of the government which make it cumbersome for the governments to get amendments and bills passed as per the promises done in the past.

4.    Another point is the implementation of the law.  The machinery can’t be replaced overnight and since it has gone very much corrupt the honest government has to find the ways and means of implementing the agenda for welfare of the people.