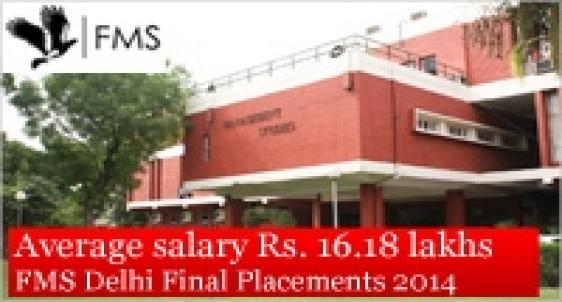 The Faculty of Management Studies, Delhi has had a legacy of securing stellar placements, both in terms of the compensation and the wide variety of profiles on offer. This year’s placement season has continued this legacy, securing 212 offers for a batch where 205 students participated in the placement process, ensuring 100% placements. Average salary of total offers increased to Rs.16.18 lakhs per annum.

37 first-time recruiters visited the campus this season taking the total number of companies participating to 107. A total of 38 students received Pre-placement offers.

Among the students opting out of placements, 4 of them chose to pursue entrepreneurial ventures. One such venture, Commerce Labs LLC, develops software plugins for e-commerce websites, while another deals with the procurement and sale of sporting goods.

Consulting and General Management have continued to gain ground as they collectively comprise a third of the total number of offers. Students of the campus secured placements from McKinsey and Co. and BCG, testifying the campus’ calibre in this domain. Deloitte USI and Deloitte India made 12 offers at FMS, collectively making them the largest recruiters in this year’s process.

In the domain of General Management, numerous offers were made in a variety of sectors with Reliance Industries Limited being the largest recruiter. Niche profiles in this domain include the position of Deputy General Manager, Strategy offered by Videocon.

Marketing
FMS continued to maintain its position as a stronghold for the domain of Sales and Marketing. This year’s process saw the offers in the Marketing domain spread across a variety of sectors. MH Alshaya and Tata Elxsi were first time recruiters who offered the students positions with international postings. FMS also received healthy participation from legacy recruiters in the FMCG sector such as HUL, P&G, ITC, Johnson & Johnson, Asian Paints, Dabur, Godrej and GSK.

HT Media, Times OOH, Sony Entertainment Television and Star represented the Media and Entertainment sector while Samsung, Microsoft and Vodafone were companies from the Telecom and Technology sector. FMS students emerged as the national winners of the BIAC competition and secured offers from PepsiCo. Consumer banking profiles were offered by Standard Chartered, Citibank, HSBC and Axis Bank.

Finance
The BFSI sector accounted for nearly one-fourth of all companies participating in the process this year. An impressive array of international banks visited the campus. The Faculty also witnessed healthy participation from Indian Banks and a lot of niche profiles were on offer during this year’s process such as roles in front end investment banking and financial markets.

FMS Delhi secured the participation of Indus Balaji, a private equity firm. Corporate finance profiles were offered by Coca-Cola, Nestle and Matrimony.com, ensuring that the students had sufficient breadth in terms of sector as well as profiles in choosing to pursue their careers in the financial domain.

Operations/ IT
Operations and IT accounted for a fifth of all the jobs offered at FMS. Zomato offered the campus the position of Assistant Vice President, Operations. Prosegur, a multinational that deals in security of financial services offered the students an operations profile with an international stint. The other profiles offered spanned across a wide variety of roles including supply chain, procurement and logistics.

In the IT domain, FMS secured the participation of new recruiters who were emerging leaders in their field such as Jabong and Flipkart. Students of the campus secured placements in General Electric’s coveted IT Leadership programme. Google, visiting the campus for the first time, was joined by Infosys BD and Matrimony.com in offering marketing roles from the IT sector. Microsoft also offered its coveted Program Manager role for its India Development Centre, while HCL offered its international position of Global Engagement Manager for the second consecutive year. Other profiles offered were the roles of product management, business analytics and IT consulting.

Stay tuned to MBAUniverse.com for more news and updates on FMS Delhi Placement 2014