MBAUniverse.com News Desk | :
April 3, 2014
130 recruiters have so far visited IMT Ghaziabad for Placement 2014 with more offers and PPOs. There are more number of offers as compared to previous years. 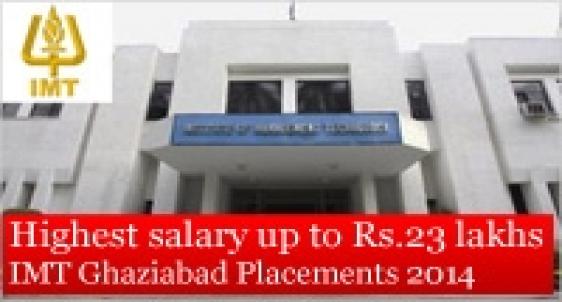 Packages have increased as compared to last year, Quantum leap in the number of companies participating in the campus process Dr Bibek Banerjee, Director, IMT Ghaziabad

Placement season 2014 at IMT Ghaziabad began in the first week of December 2013 which has already seen more than 130 recruiters making more offers than last year. According to Dr Bibek Banerjee, Director IMT Ghaziabad “There are more number of offers as compared to previous years. PPOs have also increased from last year A total of 571 students from PGDM and DCP have sought placement at IMT Ghaziabad.

The placement 2014 has reflected an upward swing in recruitment with more recruiters offering higher placement packages and more offers.

A total of 571 students from different management programmes have sought placement in 2014.

Rise in Number of recruiters

Placement 2014 witnessed a rise of 35% in number of recruiters over placement season 2013. While there were 95 companies visiting IMT Ghaziabad for placement in 2013, the number rose to 130 with more job offers.

Annual packages are up

Beating the slowdown in placement offers, the placement season 2014 at IMT saw a rise of Rs. 6 lakhs in the highest domestic salary from Rs. 17.25 lakhs in placement 2013 to Rs. 23 lakhs in 2014. Median salary in placement 2014 is Rs. 8.7 lakhs. According to Dr. Bibek Banerjee “Packages have increased as compared to last year, Quantum leap in the number of companies participating in the campus process”

Also read other articles on Placements 2014:

Stay tuned to MBAuniverse.com for more news and updates on IMT Ghaziabad Placements 2014