MBAUniverse.com News Desk | :
April 10, 2014
MAH CET 2014 results were declared on April 9, 2014. This article gives you the expected cut-off range for Top B schools in Maharashtra. Choose your B school as per your MAH CET 2014 score. 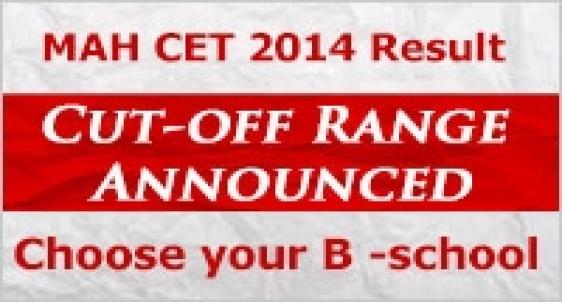 Allotment of the institute will be through CAP and will be based on your scored percentile and past academic record.

MAH CET 2014 results were declared on April 9, 2014. These results were scheduled to be announced on April 21, 2014 but DTE Maharashtra declared them 11 days prior to the schedule date.  53 thousand test takers, trying to find the expected cut offs in leading B schools, are now exploring the admission opportunities.

MBAUniverse.com was the first to share the breaking news after declaration of the MAHCET results by DTE Maharashtra.

To get LIVE Updates on MAH CET 2014 Result cut-offs and scores, Click here or on below link: http://www.mbauniverse.com/mah_cet/mahcet.php

Allotment of B schools

According to DTE Maharashtra it will be conducting the Centralized Admission Process (CAP) from May 12, 2014 to May 22, 2014 and will announce the merit list on May 26, 2014. Allotment of the institute will be through CAP and will be based on your scored percentile and past academic record.

To get LIVE Updates on MAH CET 2014 Results cut-offs and scores, Click here

To help you decide which B school you could be allotted, MBAUniverse.com, presents the expected MAHCET 2014 cut off, based on the past trends and scoring pattern for various highly ranked B schools in Mumbai and Pune.

The MAH CET 2014 Result on April 9, 2014 have shifted the focus from other B schools to much sought after B schools in Maharashtra where admission opportunities could be explored through CAP.

The top rated B schools in Maharashtra, although will not accept any  fresh application, the admission for Maharashtra and Non Maharashtra candidates are available for the candidates who had registered for MAHCET even if they  have not appeared in the examination.  They could be allotted a B school, if they appeared in any other All India Test like CAT/XAT/CMAT/MAT/ATMA and scored good marks.  However, those who appeared in MAHCET 2014 have a win-win situation, if they have been able to improve their scores in the test since the best of all the scores will be considered in CAP Maharashtra.

For the benefit of aspirants, MBAUniverse.com has already shared the expected CMAT Feb 2014 cut offs for admission in B schools in Mumbai and Pune.

If you have any query on MAH CET 2014, talk to our LIVE Counselor for right advice and suggestions, Click Here: http://www.mbauniverse.com/mbau_faq/client.php

Click below to get MAH CET toppers advice on admissions and preparations.

Visit Special MAH CET 2014 Forum at MBAUniverse.com to clear all your doubts
http://www.mbauniverse.com/forums/

Past articles on MAH CET 2014 Exam

MAH CET 2014 Results: Know your next steps after MAH CET results on April 21