CAT Topper: How an Undergraduate scored 99 percentile in CAT exam, you can do it too

MBAUniverse.com News Desk | :
May 28, 2014
In this fourth article of CAT Topper 2013 series we present the success story of Ankur Khanna, a CAT Topper who started taking CAT during his under-graduation years. 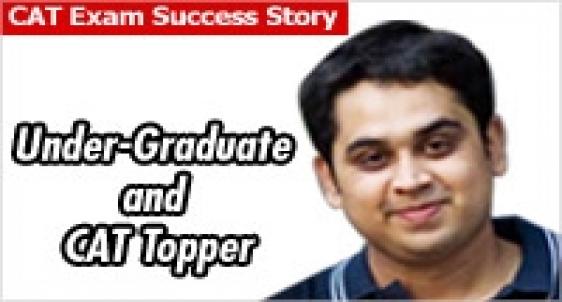 Be determined and first of all know where your preparation stands at this particular time. Give ample time to your weak areas and leave nothing for the last days.

MBAUniverse.com is continuously publishing success stories of CAT Toppers to guide CAT 2014 aspirants in their preparation for CAT 2014 exam. In this fourth article of CAT Topper 2013 series we present the success story of Ankur Khanna, a CAT Topper who started taking CAT during his under-graduation years.

He first took CAT exam when he was in the 3rd year of BE-Biotechnology. Ankur Khanna loves quant and his strategy was to improve accuracy and then capitalize on the strong part i.e. Quant.

Q.1. What was the CAT 2013 prep strategy?
In 2008 when I was in the 3rd Year of my BE (Biotechnology), I decided to take CAT the very first time. Since then, I have been taking it without much preparation along with my college and 3 Years of Job at L&T Infotech, Mumbai and scoring above 90%ile on all occasions. Taking CAT almost became a habit and I fell in love with Quant. Then in 2013, I decided to take it a final go and left my job in June 2013 as I analyzed that 3 months of rigorous preparation is enough for cracking CAT 2013.

I started my Preparation on July 1, 2013 when I used to devote 15 hours a day to CAT preparation. My Strategy was to improve my accuracy and then capitalize on my strong part i.e. Quant.

Q.2. What was the strategy in testing room to attempt the question from different sections: Quantitative Ability & DI, Verbal Ability & LR?
Test room strategy was to attempt only those questions for which I am 110% sure. Slightest of doubt, and I will leave that question unmarked. This strategy worked for me and I managed to score 98.90%ile in Quant with 21 attempts and 92.99%ile in Verbal with 22 attempts scoring an overall 98.60%ile.

Q.3. Apart from CAT which exams did you appear? How did you prepare for them after CAT? What score did you get?
Apart from CAT, I took SNAP and NMAT scoring above 97%ile in both of them. Preparation for NMAT and SNAP was easy as compared to CAT and no special efforts were needed apart from increasing on my speed while keeping the accuracy intact.

Q.4. How many GDPI did you take part in?
I got calls for GDPI from New IIMs(All Six), MDI, NITIE, SJMSoM IIT Bombay, IIT Delhi, VGSoM IIT Kharaghpur, IMT Ghaziabad, IMI Delhi and I attented all of them.

Q.7. What advice and tips you would like to share with the candidates preparing for CAT 2014?
I would like to advise all the CAT 2104 takers to be determined and first of all know where your preparation stands at this particular time. Give ample time to your weak areas and leave nothing for the last days. I used to study nearly 18-19 hours a day during the last few days. Solve all the questions that you come across. Join at least 2 mock series and practice lots of online stuff available free of cost. You can never be sure of being 100% prepared at any point of time and there is always some scope for improvement.

Q.8.  Your message to CAT 2014 aspirants.
Don't follow someone else's strategy and make your own as per your convenience. Studying 2 hours a day for 6 months is as good as studying 15 hours a day for 2 months. Only thing is, don't get disheartened with your low mock scores as every day is a new day and you get to learn from your own mistakes. All the Best.

CAT Topper 2013: How Ishika from Kolkata made it to the top B-school with her CAT score

MBAUniverse.com offers a comprehensive preparation package coupled with over 200 online interactive classes with Top CAT experts including from IIMs for CAT 2014 preparation. Visit the link below for more information and new batch schedules: http://www.mbauniverse.com/cat_preparation_online.html

If you have any complains about B- schools, write here: Register your Complain about B-schools