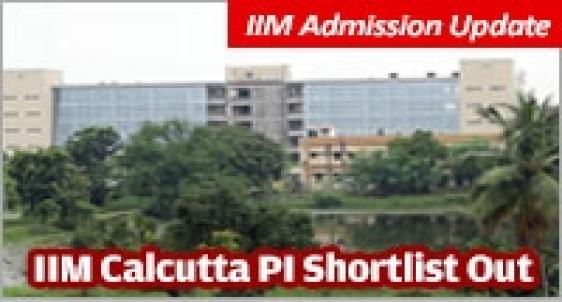 IIM Calcutta has declared the shortlist of candidates for the Written Ability Test (WAT) & Personal Interview round (PI) today on January 5, 2015 for the flagship Post Graduate Program in Management (PGP-PGDM) 2015-17.

IIM Calcutta (Kolkata) promised that the “Shortlist of candidates to be called for Personal Interview (PI) and Written Ability Test (WAT) for PGP-PGDM batch 2015-17 is likely to be available on January 5, 2015”.  Keeping the commitment IIMC took care to declare the shortlist of candidates on the pre-declared date.

Candidates who have scored high sectional as well as overall percentile in CAT 2014 and have consistent excellent academic profile have been shortlisted by IIMC for WAT and PI round for admission 2015.

How to know whether shortlisted

In order to know whether you have been shortlisted by IIM C for next phase of admission round you are required to click on the IIMC home page. A ticker is running ‘Shortlist for PI and WAT for PGP-PGDM, 2015-17’. You are required to click on it. This will direct you to the shortlisting page where you are supposed to enter your CAT 2014 registration number and your CAT 2014 registered mail id to know the status of shortlisting.

Alternately you can also click on the link http://203.197.126.76/2015/. This will take you straight to the relevant site of IIMC where from you can know well whether you have been shortlisted for final admission round.

If shortlisted you will get the message that your name appears in the list of shortlisted candidatesfor Personal interview (PI) and Written Ability Test (WAT) for the Post Graduate Program in Management (PGP-PGDM) 2015-17.

If not shortlisted the message will be ‘We regret that your name does not appear in the list of shortlisted candidates for Personal Interview (PI) and Written Ability Test (WAT) for the Post Graduate Program in Management (PGP-PGDM) 2015-17. ‘

IIMC has shortlisted the candidates primarily on parameters of high sectional and over all CAT 2014 scores as well as excellent academic profile. The first primary parameter is the High sectional and overall percentile in CAT 2014. A general category candidate with percentile of 95 to 100 in each section and approximately 99+ overall has been shortlisted for WAT & PI round. However high CAT 2014 scores are not the only criteria of shortlisting the candidates at IIMC. Please also note that you may not be shortlisted at IIMC despite scoring a very high overall percentile but weak and uneven sectional percentile

A candidate with excellent Academic Profile with  more than 90% marks in class X and XII has been preferred in the shortlisting at IIMC for PI & WAT round by IIMC.

Accordingly a candidate with high CAT 2014 percentile but not so good academic profile might not find his name among the list of shortlisted candidates at IIMC despite scoring 99+ percentile.

Admission policy 2015 declared by IIMC called for minimum threshold percentile of 90 below which candidate would not be shortlisted. But the actual cut off percentile has gone 99+, much higher than anticipated for General Category candidates .

Number of candidates shortlisted at IIMC

IIMC shortlists the number of candidates 8-10 times of its batch strength. At present the batch is around 462. Around 4000 candidates  have been shortlisted by IIMC for next phase of admission round 2015.

PGPEX VLM (Post Graduate Program for Executives for Visionary Leadership in Manufacturing) is a one year full time residential program designed for the manufacturing sector. The course is being conducted jointly by 3 premier institutes of India viz. IIM Calcutta, IIT Kanpur and IIT Madras. FP (Fellow Program) is a research program whose duration depends on student performance and is about four years on an average.

IIMC: The dream B school

The Indian Institute of Management Calcutta headed by its well learned Director Prof Saibal Chattopadhyay  is the first institute in the IIM family. Established in 1961 IIMC has a legacy of 53 years now. The Bschool is one of most sought after IIMs especially for those pursuing career in management with specialization in finance.  IIMC has recently been awarded with AACSB Accreditation, the hallmark of excellence in business education. This top B school been ranked at 2nd position in MBAUniverse.com ranking 2014-15.