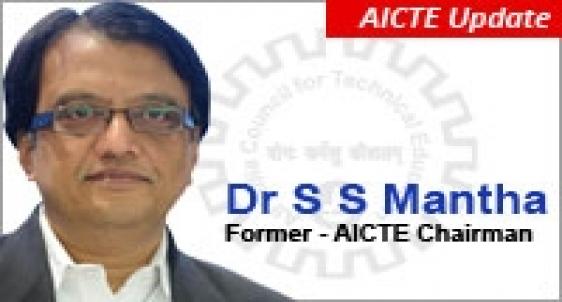 Known for implementing significant changes to bring  transparency and accountability in the AICTE administration, Dr S S Mantha has relinquished the office of Chairman AICTE on January 2, 2014. Confirming the development, Dr S S Mantha said “Yes, I have demitted office on January 2 after a very fruitful tenure in AICTE as its Chairman.”

Dr Mantha joined All India Council for Technical Education (AICTE) in March 2009 as its Vice Chairman and took over as Chairman, AICTE on January 5, 2012. During his tenure he brought in more transparency and accountability in AICTE Administration. He implemented the e-Governance driven approval processes, which reduced the discretionary powers of local administration, and brought in more transparency and ease.

Dr Mantha also successful initiated CMAT exam, which has become the largest MBA exams in the country after CAT.

Dr Mantha's term was also marked with a skirmish with 300 odd PGDM B-schools after he released a notification on December 2010, which had far reaching implications on the autonomy of PGDM B-schools. B-schools went to Court and got relief from the Court, which stayed the notification.

An alumnus of VJTI, Mumbai Dr. SS Mantha was a professor and HOD Department of Mechanical Engineering at VJTI where he taught for 2 decades. Subsequently he was appointed the pro vice chancellor, SNDT Women’s University by the Government of Maharashtra. He implemented the e–Governance project, automating the workflow for the department of Higher and Technical Education, Government of Maharashtra, in 1995. The concept of egovernence ws also implemented at AICTE after he joined it in 2009.

During the tenure of Dr SS Mantha, the implementation of e-governance made almost all the information available under public domain. For example, on the AICTE website under Bureaux section, one can get an idea about the alumni, faculty members along with qualification and even get to see their registration documents, affidavits and land documents.

Ministry of HRD has initiated the process of selecting the new ACITE Chairman.

Stay tuned to MBAUniverse.com for more updates on AICTE.