MBAUniverse.com News Desk | :
January 9, 2015
Despite the finalization of 6 mentor IIMs for each of the proposed 6 new IIMs but no campus allotted to any of them, mystery surrounds the unknown admission process 2015 for the proposed B schools 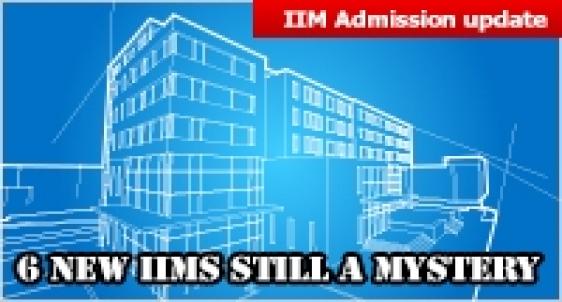 There is no indication either from the CAT Centre 2014 or the CAT conducting IIM Indore about the admission criteria and process for final admission round for these proposed 6 new IIMs.

Despite the finalization of 6 mentor IIMs for each of the proposed 6 new IIMs but no campus allotted to any of them, mystery surrounds the unknown admission process 2015 for the proposed B schools. It appears that the campus of mentor IIM might be used to commence academic activities in 2015 to promote the proposed IIMs.

Proposed 6 new IIMs in the states of Andhra Pradesh, Odisha, Bihar, Himachal Pradesh, Maharashtra and Punjab supposed to begin their academic session in 2015 are still struggling to get their identity. There is no final decision which city the IIM will be placed in, not to say of the campus site.

IIM: Synonymous to city not to state

IIMs are synonymous to the city they are situated in. We never address IIM Ahmedabad by its state like IIM Gujarat. Will the new IIMs be called IIM Punjab, IIM Bihar, IIM Himachal or IIM Odisha?

So far no IIM is known by its location state but the announcement during the budget 2014-15 by the Govt of India to establish one IIM in each of the above six states has not reached the city of locating these IIMs in those states. The matter still remains undecided whether IIM in Bihar will be established in Patna or in Gaya; the location of proposed IIM in Andhra Pradesh will be in Visakhapatnam or in some other city is yet to be decided.

The stage of indecision may adversely affect the prospective students who have scored the desired percentile and now wish to pursue MBA from one of the IIMs the very existence of whom is still not known.

Where to establish the IIMs

Number of factors are to be considered while establishing an institute to the standard of an IIM. Availability of Good and experienced full time faculty at the IIM in sufficient number so that teacher student ratio remains within the prescribed standard of 1:10 and learning experience is not diluted.

Good infrastructure to enhance learning; availability of education for the children of faculty members; proximity to corporate and industrial connectivity to groom the students to take up leadership role in future are a few of the many factors needed to be considered before establishing an IIM.

Following could be the location cities for future IIMs to be established and are to commence academic activities in 2015. The campus may not be ready for operation and most likely they will function from some borrowed campus.

Sirmaur in Himachal Pradesh; Amritsar in Punjab; Patna in Bihar; Bhubaneshwar in Odisha; Nagpur in Maharashtra and Visakhapatnam in Andhra Pradesh are the possible locations where the proposed new IIMs are supposed to be established. The land is yet to be provided by the respective states in most of the cases.

Not all the IIMs are of same quality, standard and ranking. Surely no one can rate IIM Ahmedabad, IIM Calcutta, IIM Bangalore with IIM Ranchi, IIM Udaiput, IIM Raipur on the same standard. On the same note the proposed new IIM when established will take many years to come to the standard of existing 6 new IIMs.

Intake in these IIMs will also be an issue. Whether the candidates would prefer to take admission in these IIMs the very existence of whom is not yet known, is yet to be seen.

Nothing has been advised either by CAT Centre 2014 or the CAT 2014 conducting IIM Indore about the proposed intake in these IIMs which are yet to be established. Usually in the beginning an IIM may go for an intake of 60 candidates but the decision on intake is not yet out.

With the mentors of the six new IIMs having been finalised, Government  says it is prepared to commence academic activities of these IIMs from the coming academic session but there is no clarity on their admission process, shortlisting criteria and PI round without which the admission can not be finalized.

CAT 2014 test takers are in a dilemma and are clueless on all the above issues. CAT Centre 2014 is silent on it and is directing the students to raise such queries with IIM Indore that again is unable to respond.

Will the mentor IIM conduct PI?

The proposed new Indian Institutes of Management (IIMs) are expected to increase the intake of students in the IIMs by another 300 seats with their number grown to 19.  With the announcement of mentor IIMs, it appears that these mentor IIMs will be shortlisting the candidates for next phase of admission round.  In all probability the CAP round going to be conducted by IIM Udaipur for six new existing IIMs will also include the PI round for the 6 proposed new IIMs.

Since HRD Ministry is prepared to commence academic activities of these IIMs from the forthcoming academic session, the admission process for these IIMs is also expected to begin soon by the mentor IIM.

Stay tuned to MBAUniverse.com for more updates on admission 2015 in New IIMs