MBAUniverse.com News Desk | :
January 14, 2015
IIM Indore the sixth in the family of IIMs is going to declare the shortlist of candidates for next phase of admission round on January 16, 2015 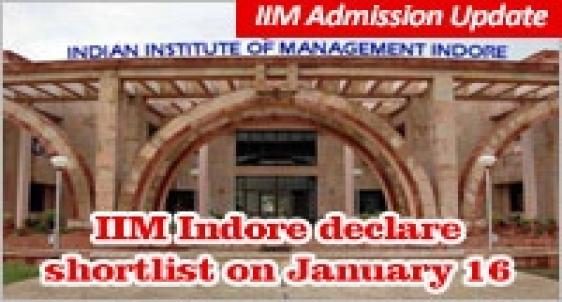 For PGP batch 2015-17 in the admission year 2015, IIM Indore will shortlist the candidates for its Indore and Mumbai campuses. The admission process to IIM Indore-UAE campus has been cancelled.

Announcing the cancellation of admission for UAE campus IIM Indore has stated “It is with regret that we wish to inform you that due to unforeseen circumstances beyond the control of IIM Indore, admissions to PGP-UAE program for the 2015-17 batch is cancelled.” Alongwith the admission schedule IIM Indore has also declared the shortlisting criteria for its PGP programme at Indore and Mumbai campuses.

IIM Indore will accept CAT 2014 scores to shortlist the candidates for final admission round. CAT 2014 result was declared around 5PM on Dec 27, 2014. The result has set precedent with more number of 100 and 99 percentilers in CAT 2014 as compared to earlier CAT exams. Accordingly it is expected that the threshold CAT 2014 cut off percentile in the shortlisting of candidates would be much higher than what is announced by IIM Indore in its admission policy 2015.

Shortlisting the candidates is not based only on CAT 2014 scores. Apart from high CAT 2014 scores a candidate is required have excellent academic profile to get shortlisted for final admission round at IIM Indore.

IIM Indore (IIMI) is headed by its well learned Director Prof Rishikesha T. Krishnan. Since its inception in 1996, IIM Indore has been acting as a leader in the field of management education, interfacing with the industry, government sector and PSUs.  IIM Indore has a campus at Mumbai also. The Mumbai Campus operates out of Institute of Company Secretaries of India, Central Business District, Belapur. It has facilities like classrooms, 100 seat auditorium, computer laboratory, boardrooms, mess, library, guest rooms and sports facilities like badminton courts.

Like IIMA, IIMC and IIMB, the IIM Indore has prescribed its minimum CAT 2014 cut off percentile as its shortlisting Criteria. The candidates will be shortlisted for next round of admission process comprising Written Ability Test (WAT) and personal Interview (PI).

Although the minimum CAT 2014 percentile prescribed as cut off by IIM Indore is 90, the actual cut off could go well beyond 95+.

Besides, those who have not scored a high balanced percentile in both the sections in CAT 2014 may not expect to be shortlisted by IIMI unless they have excellent academic profile. IIMI is the dream B school for MBA aspirants.

In fact the actual CAT 2014 cut off percentile section wise as well as overall percentile to be considered for shortlisting the candidates at IIM Indore could be much higher than the above mentioned minimum cut-offs.

This is due to the reason that the short-listing for PI is done on the basis of composite score derived after incorporating the weightage to other parameters also.

Candidates will be shortlisted for WAT & PI stage on the basis of composite scores which will be arrived at by accounting for the academic profile also. The Composite Score therefore is calculated on the basis of CAT score, academic scores, and gender diversity.

There will not be any weightage to the academic scores beyond standard 12. In fact candidates scoring percentage of marks above 85 can get a good weightage in the computation of composite scores.

The computation is as follows: Gender Diversity Factor (GDF)
= 3 for Female Applicants
= 0 for Other Applicants

Please also note that after declaration of shortlist on Jan 16, 2015, IIM Indore will not send any individual regret letter to applicants who are not shortlisted for WAT and PI.

The Post Graduate Diploma in Management (PGP) a flagship programme of IIM Indore, is a two-year full-time residential programme. The PGP issued by the Indian Institute of Management Indore is recognized by Association of Indian Universities (AIU) as equivalent to M.B.A. Degree of an Indian University.

Stay tuned to MBAUniverse.com for more updates on CAT 2014 IIM I