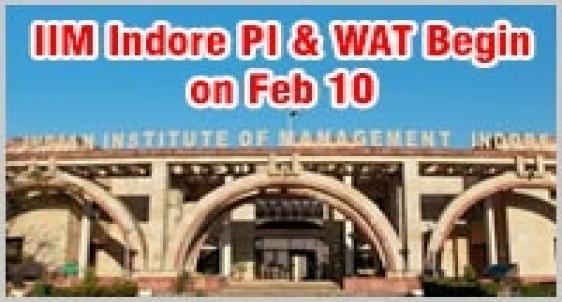 For PGP batch 2015-17 in the admission year 2015, IIM Indore declared the shortlist of candidates on Jan 16, 2015 and will begin the Personal Interview (PI) round on Feb 10, 2015. IIM Indore will make admission offer to the candidates for its Indore and Mumbai campuses for PGDM 2015-17 batch. The admission process to IIM Indore-UAE campus has been cancelled. Announcing the cancellation of admission for UAE campus IIM Indore has stated “It is with regret that we wish to inform you that due to unforeseen circumstances beyond the control of IIM Indore, admissions to PGP-UAE program for the 2015-17 batch is cancelled.”

IIM Indore is the sixth in the family of IIMs. Announcing the proposed date of beginning the final admission round as February 10, 2015 IIM Indore has clarified ‘IIM Indore will not send any individual regret letter to applicants who are not shortlisted for WAT and PI’. It therefore implies that those who have been shortlisted must have received the proper information to attend the IIM Indore PI-WAT round on the designated dates.

IIM Indore has declared the schedule of PI round for admission 2015 in 3 slots of 4 days each beginning from February 2015 to April 2015.

According to IIM Indore ‘The candidates satisfying the requirements mentioned in Stage 2 will only be considered for the final selection. Category wise merit list will be generated based on Final Composite Score (CS)’.  IIM Indore will issue provisional admission offers  after arriving at the final composite scores based on the performance in PI-WAT round.

Weightage to components at final selection

Final Composite Score = Sum of the above scores (Max 100)

The Post Graduate Diploma in Management (PGP) a flagship programme of IIM Indore, is a two-year full-time residential programme. The PGP issued by the Indian Institute of  Management Indore is recognized by Association of Indian Universities (AIU) as equivalent to M.B.A. Degree of an Indian University.

IIM I: High ROI B school with good learning experience

IIM Indore is headed by its well learned Director Prof Rishikesha T Krishnan. This coveted B school conducted CAT 2014 with Dr Rohit Kapoor as the convener. Since its inception in 1996, IIM Indore has been acting as a leader in the field of management Education, interfacing with the industry, government sector and PSUs. IIM Indore has a campus at Mumbai and a campus at Dubai also. The Mumbai campus operates out of institute of Company Secretaries of India, Central Business District, Belapur.

IIM Indore has an intake of 451 seats. The PGDM course fee is Rs 13 lacks and average placement package in 2014 stood at Rs. 12.3 lakhs which reflects its high Return on Investment (ROI).

Stay tuned to MBAUniverse.com for more updates on IIM Indore