MBAUniverse.com News Desk | :
February 11, 2015
EPSI has raised questions on requirement of compliance to the various points of AICTE Public Notice for Approval Process 2015-16 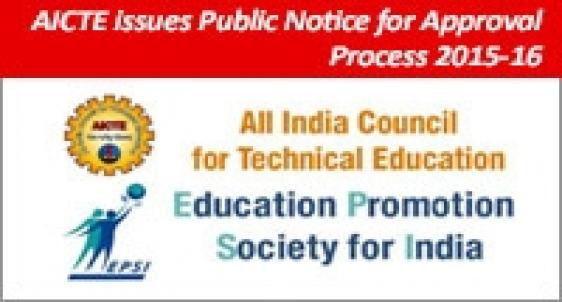 Quoting Hon’ble Supreme Court of India order dated December 15, 2014 AICTE has invited applications for approval from all technical institutions including affiliated technical colleges and also new technical colleges which will require affiliation by a university for conducting technical programs/courses including courses of MBA/management for the academic year 2015-16. The deadline to file online applications for all approvals with AICTE office has been fixed as Feb 20, 2015.

AICTE has not only allowed less than a month to file such application for approvals but also has not consulted and involved all the stake holders to arrive at the modalities and decision to invite applications for approval.

EPSI for more time to apply

Education promotion Society for India (EPSI) has requested AICTE to extend the time limit as it may not be possible for the institutes to file approval application by Feb 20, 2015.

To apprise and present its point of view on the points necessitating reconsideration, EPSI has sought appointment with Smt Smriti Irani, Hon’ble Minister of HRD, Govt of India and Dr Avinash S Pant, Acting Chairman AICTE. Detailed letters outlining the issues have been written by EPSI to them on Feb 6, 2015 seeking appointment.

Education promotion Society for India (EPSI) in its letter dated Feb 6, 2015 written to HRD Minister and AICTE Chairman, has highlighted the fact that the society has always been supporting and promoting the cause of quality improvement in Management Education across the country. The society has raised the objection that number of points in the Public Notice for Approval Process 2015-16 issued by All India Council for Technical Education (AICTE) need consultation with all the stake holders but AICTE has ignored them and has issued the notification unilaterally.

No Award to Accredited B schools

According to EPSI, AICTE should consider conferring some award to the accredited institutes as they have earned accreditation on the basis of their quality and high standard of education. It is the brand/value of accreditation that will attract more students as well as industry for placement at the B school.

B school with 2 passed out batches may apply for Accreditation

EPSI has brought to the notice of AICTE vide its letter dated Feb 6, 2015 that a minimum number of 2 batches must have passed out of the B school to make it eligible to apply for accreditation. Hence as per the norms, it may not be possible for the B schools not fulfilling this criteria to apply for Accreditation as desired by AICTE.

Apart from this fact, the B school may not go for early accreditation as the financial planning submitted by the B school to AICTE/State Govt/Affiliation University is based on number of courses and number of seats.  This point needs to be discussed in detail.

Sudden blow: Job of years, not possible in a few days

EPSI has objected to AICTE sudden requirement to have NBA for accredited courses. In its letter contending the issue EPSI says “NBA as a process takes a few years not only for new institutes but even for existing Institutes/courses.”  In view of EPSI the condition of having valid NBA for accredited courses for increase in intake, adding new courses, starting of part time courses as well as starting of 2nd shift programme is sudden as norms for 2014-15 were silent on this aspect. It is therefore not possible to get accreditation in such a short time of a few days.

Citing various provisions and orders passed and pending in Honourable High Court of Delhi, EPSI has suggested and requested amendments in AICTE Approval Process Handbook 2015-16 while seeking appointment with HRD Minister and AICTE Chairman to find a positive solution on pending issues.

The order of Hon’Ble Supreme Court

AICTE has cited the interim relief order passed by Hon’ble Supreme Court of India in I.A. No.(S) 7277/2014 filed as Odisha Technical Colleges Association V/s AICTE & Others. The order has granted extension of regulatory control of technical and management education to AICTE for 2015-16 and the institutes/courses would need prior approval from AICTE.

Hon’ble Supreme Court of India in its order dated May 9, 2014 granted final regulatory powers on MBA and other management education along with the technical education to AICTE for the session 2014-15. The order passed on May 9 had directed that prior approval of AICTE was compulsory and mandatory for conduct of a technical course including the Management/MBA course by an existing affiliated Technical college and also new Technical college which will require affiliation by a University for conduct of its Technical courses/Programmes for the academic year 2014-15. The order dated Dec 15, 2014 by the apex court is an extension to this order providing Interim relief.

This order came subsequent to interim order dated April 17, 2014 on the petition of Odisha Technical College Association (OTCA) which restored the regulatory control of technical and management education to AICTE and allowed AICTE to move according to the Approval Process handbook for another year 2014-15. With other provisions, which need to be reconsidered, AICTE has issued public notice for approval process and accordingly has published Approval Process Handbook 2015-16.

EPSI, a not for profit autonomous society with mandate from Universities and institutions as its members is the frontrunner to deliberate on the issues and concern to raise education quality and attain benchmark standards of the national and international level. EPSI finds that the AICTE Approval Process Handbook 2015-16  has the issues to be resolved as soon as possible and accordingly is taking lead in this direction.

Stay tuned to MBAUniverse.com for more updates on EPSI