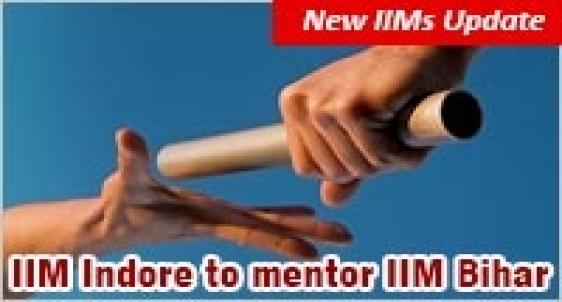 In the month of January 2015 Bihar Government invited IIM Indore, the mentoring IIM of IIM Bihar to visit the Magadh University campus and take stock of infrastructural facilities to run the IIM- temporarily for now and permanently after constructing the site in 150 acres of land available at the University campus.

Except for the proposed 6 new IIMs the admission process for all the other 13 Indian Institutes of Management (IIMs)-old and new is going to be over shortly. So far the establishment and functioning of IIM Bihar which is going to be mentored by IIM Indore, is still dangling between the 2 cities of Patna and Gaya. With the sudden turn of political events in Bihar, the decision on IIM City in Bihar may again go for a revision by the new state government and may prolong the process for some time again.

The session of IIM Bihar is proposed to commence in July-August 2015, however the admission process and academic site where the IIM Bihar would start functioning is still in dark. Now it is being contemplated that the students finally selected for admission to IIM Bihar might get to settle for Magadh University campus for their first year of education in 2015.

On the invitation from Bihar Government a team from IIM Indore was supposed to visit Magadh University in Bodhgaya to finalise the site for temporary as well as permanent campus of IIM Bihar.

Prof Rishikesha T Krishnan, Director IIM Indore confirmed the invitation and proposed visit of the team of experts from IIM Indore to Magadh University campus to assess the suitability of  establishing a top rated B school like Indian Institute of Management in Bodhgaya.

On the other hand, Magadh University is reluctant to part with its 150 acre land to build the permanent campus of IIM Bihar and as such has referred the matter to the Governor of Bihar.

The then education Minister of Bihar Government Mr Brishen Patel had however confirmed that the matter had been discussed  with the Union HRD minister, Smriti Irani, in Delhi and it was resolved that IIM would be set up In BodhGaya.  No official notification in this regard has however been issued by the Ministry of HRD clarifying its stand to set up the IIM in Bodhgaya

Earlier it was decided that IIM Bihar would be established in Bodhgaya and therefore would be renamed as IIM Gaya as all the IIMs are known by their cities and not by their states. Bihar Government was keen to establish the IIM at Bodhgaya. Accordingly distance education block of Magadh University has been offered to run the temporary campus of IIM Bihar thereat.

It is not certain whether IIM Bihar will now be the IIM Gaya or IIM Patna as the new Govt with Shri Nitish Kumar as Chief Minister has taken over. Gaya is the hometown of earlier Chief Minister who pitched for IIM in Gaya. If the new Government proposes change in IIM City, it may again shift to Patna.

There is no doubt that IIM Bihar will start functioning from academic session 2015. Whether it begins at Gaya, Patna or the academic sessions are conducted at the mentoring IIM Indore campus, may not affect adversely the prospects of the IIM. Number of newer IIMs like IIM Rohtak, Ranchi, Trichy are operating from the temporary campuses, it doesn’t dilute their reputation.  On the other hand increasing intake, more number of programmes, higher placements have become their USPs.

On the same lines, IIM Bihar may begin functioning from some temporary campus but in a few years it would get housed in its own campus.

IIM Indore the mentoring IIM for IIM Bihar is supposed to give shape to the proposed IIM. IIM Indore is going through the process of final admission round and in all probability will also select the candidates for IIM Bihar so that the session could begin on time in 2015.

It is expected that there would an intake of 60 students in the first session of flagship PGDM 2015-17 batch at IIM Bihar.

Neither the mentoring IIM Indore nor the MHRD has declared the shortlisting criteria for the candidates on the basis of CAT 2014 scores. However, since all the IIMs required a threshold cut off sectional percentile of 80+ and overall percentile of 90+, it is expected that same shortlisting criteria would be applicable for IIM Bihar as well. IIM Indore may not shortlist the candidates below the prescribed sectional CAT 2014 cut off even if they might have scored high overall percentile in CAT 2014.

The common admission process (CAP) 2015 for admission to new IIMs is being coordinated by IIM Udaipur. The process has started and consists of Written Ability Test (WAT) and Personal Interview (PI). There is no Group Discussion (GD) round. On the same pattern candidates are supposed to go through the admission process comprising WAT & PI for IIM Bihar.

Out of the candidates already shortlisted and passing through the PI round,  a few may be offered admission to IIM Bihar, if they exercise such option which may or may not be available in the option form to be filled up at the final admission round.

Since HRD Ministry is prepared to commence academic activities of IIM Bihar from the forthcoming academic session in 2015, the admission process for the IIM Bihar is supposed to be concluded soon by the mentor IIM Indore.

Stay tuned to MBAUniverse.com for more updates on IIM Bihar