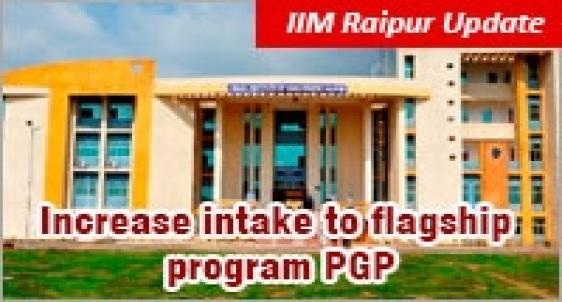 CAT 2014 test takers who have scored a high balanced sectional as well overall percentile and shortlisted for CAP round 2015 will have better opportunity to get admission in IIM Raipur as with effect from academic session 2015-16 the newer IIM has increased intake in its flagship PGP programme by 20 seats with alongwith an increase of 10% in its programme fee.

Increase in intake at IIM Raipur from 120 to 140 seats will foster the way of admission in 2015 for IIM aspirants who couldn’t get admission in the IIMs despite scoring a high percentile due to low intake. While the older IIMs have sufficient intake every year, the intake at newer 6 IIMs is comparatively low and the fresh admissions till 2014 remained in a range of 60 to 120 students in the flagship PGP programme at each of these IIMs.

By adding 20 more seats to its PGP programme, the Indian Institute of Management Raipur aims to cater to the dynamic market.

Just before the announcement to increase the intake by IIM Raipur, IIM Udaipur, the IIM coordinating Common Admission Process (CAP) 2015 for the six new IIMs  has already announced to increase the intake to its flagship PGP programme 2015-17 by 30 seats. Now the total addition of seats is 50 in both these IIMs.

The increase in intake is not without riders. Now the IIM Raipur students will have to shell out more amount to pay the tuition fee. The B school has decided to hike the tuition fees for its two-year flagship PGP in Management by 10% from the current tuition fee of Rs. 6,60,000. The revised tuition fee for PGP will now be Rs. 7,26,000 and the total PGP fee for the academic session 2015-17 will be Rs. 10,51,000. The hike in tuition fee is attributed to the escalation in the Cost Index in the previous three years.

6th batch to have 140 seats: Admission policy with balanced weightage

To its existing strength of 120 students, IIM Raipur will now have 140 students for the 6th batch of PGP 2015-17. The admission policy of PGP awards 32% weightage to CAT score, 30% to Personal Interview and Written Ability Test.  The remaining 38% is based on personal profile that includes the academic background (20%), work experience (6%), preference to female candidates (6%) and non-engineers (6%) to encourage diversity.

It may not only be IIM Raipur or Udaipur but the other new IIMs like IIM Kashipur, Rohtak, Trichy, Ranchi are in the row to increase the intake in their admission session 2015-16 given the fact that the flagship PGDM programme at these IIMs also need a higher intake.

If all these IIMs add 20 to 30 seats in their flagship PGP programmes, the CAT 2014 takers with fairly high scores will get benefit of 150-180 seats and accordingly more candidates will be offered final admission in these IIMs.

The process of final round of admission for PGP 2015-17 batch is going on and would be over in next few days. Components of Final admission round at newer IIMs constitute Written Ability Test(WAT) and Personal Interaction(PI) on the basis of which final admission offer  will be made to the candidates.  Group Discussion (GD) exercise has been removed from final admission round of new IIMs.

IIM Raipur and other newer IIMs have already announced their respective shortlists for next phase of admission round. IIM Udaipur is coordinating the CAP 2015 round comprising WAT and PI for admission to 6 new IIMs, namely IIM Kashipur, Raipur, Ranchi, Rohtak, Trichy and  Udaipur. The final admission offers will be made after completion of CAP round 2015.

IIM Raipur was established by the Government of India, Ministry of Human Resource Development, in 2010. Presently, IIM Raipur operates from the Government Engineering College Campus, Sejbahar, Raipur. The pedagogy of IIM Raipur inculcates high standards of learning by focusing on a practice-oriented learning approach and a contemporary industry-focused curriculum, driven by strong corporate interface.