MBAUniverse.com News Desk | :
March 16, 2015
Low number of registrations increased the percentage of MAHCET 2015 test takers to 95 than earlier 85 to 90 who used to take MAHCET 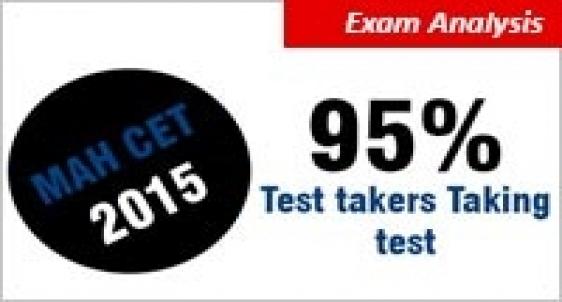 The low number of registrations increased the percentage of MAHCET 2015 test takers to 95 than earlier 85 to 90 who used to take MAHCET. Although the registered candidates for MAHCET 2015 were around 60000, the test takers were as high as 57000, a number that used to appear in earlier MAHCET exams despite higher registrations for those tests.

Releasing the Attendance statistics for MAHCET 2015 conducted on March 14 & 15, 2015 for admission to MBA/MMS programme 2015-17 in Maharashtra B schools, Directorate of Technical Education (DTE) Maharashtra has shared region wise attendance for all the 4 sessions of the test.

DTE Maharashtra has shared session-wise statistics of the registered candidates and of those who actually took the test despite many technical glitches due to which the test had to be rescheduled at a few test centres.

The registration statistics released earlier before the MAHCET 2015 by DTE Maharashtra had 60363 candidates but the registration data released now shows total number of 60292 registered candidates. The difference is due to some invalid or duplicate registrations which have not been accounted for.

The registration statistics of Outside Maharashtra State (OMS) candidates as shared by DTE Maharashtra earlier before the exam contained 2453 candidates for the 7000 OMS seats. This number has gone up to 4294 OMS candidates registered for MAHCET 2015.

The principal reason in the revision of this registration number is that many candidates, instead of inserting the OMS category, filled up ‘Open’ category. MBAUniverse.com educated the candidates to avoid the mistake and advised them to immediately edit the application form and contact DTE Maharashtra on Helpline as well as send the email.  As a result, the number of OMS candidates has gone up from 2453 to 4294.

MAHCET 2015 for 100 candidates taking test at one of the test venues at Wardha (Maharashtra)  had to be rescheduled due to technical glitches. Server of DTE Maharashtra got shut down at one of the test centres in Nagpur and the candidates who completed more than half of their test and still had sufficient time left to complete the entire exam had to abandon the exam. Candidates got panicky and some of them refused to reappear in the exam in case rescheduling of the exam was announced later.

Candidates are now keeping their fingers crossed and looking forward for some positive response from DTE Maharashtra to resolve the issue of technical problem at various test centres during the conduct of MAHCET 2015 so that their scores are not affected adversely.

Register below to get LIVE MAH CET 2015 Updates

MAHCET 2015: 2 days to go; last chance to get into top B school; Know the tips to score high

MAH CET 2015: Practice Test out: take the test and mark the changes in the exam pattern