MBAUniverse.com News Desk | :
March 20, 2015
With the legacy of declaring the final admission result on the last day of PI round itself, FMS Delhi is to commence the Personal Interview (PI) round 2015 on April 14, 2015 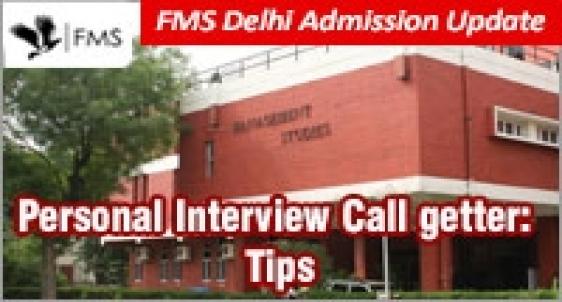 With the legacy of declaring the final admission result on the last day of PI round itself, FMS Delhi is to commence the Personal Interview (PI) round 2015 on April 14, 2015. The PI round will comprise Extempore speech and Personal Interview only, without any Group Discussion round.

Confirming that there wouldn’t be a GD component in PI round, FMS Delhi while releasing the shortlist of 2168 candidates for PI round, said “The lists of candidate eligible for the next round of admission process to MBA Programme of this Faculty, comprising of Extempore/Personal Interview, have been declared”

FMS Delhi will conduct the PI round at Delhi only and will conclude the admission process on April 20, 2015. In all 216 candidates are proposed to be offered admission for the MBA batch 2015-17. It includes 16 supernumerary seats. According to FMS Delhi “Number of seats available in PH, CW and Foreign Students Category are supernumerary. In case of Foreign Students (10 Seats), the admissions will be done on the basis of screening which will be done subsequently.”

With the shortlisting cut off CAT percentile criteria going up to 98.54 in 2015 from 98.20 in 2014, PI is going to be the only saviour in such a close competition. The final selection will be  based on the cumulative performance of the candidate in the CAT 2014 score as well as the PI round.

For an intake of 101 General category candidates in 2015 there are 1023 candidates shortlisted for PI round at FMS Delhi implying a ratio of 1:10 per seat. No doubt candidates have to fasten their belts and should leave no stone unturned to get admission in this high ROI B school.

Extempore and PI at One place: Delhi

FMS conducts its PI round at Delhi and the candidates shortlisted for final admission round have to come to North Campus of Delhi University, if they wish to participate in PI at FMS.

It takes around 30 minutes to get all degrees and other documents verified.  The individual interview process is preceded by ‘Extempore’ speech of 2 minutes. There is no syllabus or rules to choose a topic. The Chair decides who among the panel will announce a topic on the spot. No thinking time is allowed, and the speech is to be delivered before the panelists.

If the candidate is not comfortable with the topic, an alternate topic can also be announced without any penalty.  The extempore is used as a very distinguishing feature of FMS selection process. Experts and Professors at FMS Delhi recognize and emphasize on the importance of extempore by saying other than the fluency of articulation, choice of words, panelists look for evidence of a creative mind and capacity to think on one's feet. In order to be sure about the 'quality' of the candidate, panel might even give a second extempore topic after he speaks on the first one.

The Personal Interview process at FMS is short, easy going and relaxed. The members in the interview panel mostly behave in an informal manner. They hardly ever check any testimonials or documents. The assessment of a candidate is based on his behavior during the PI round. The panelists have years of experience to judge a candidate and sometimes when he is not able to respond or gets stuck on some point, he is helped to come out of the dilemma.

How to prepare & convert the call

Past and present Deans and professors at FMS Delhi suggest not to cram your head to prepare for FMS admission interviews. In their view your best chance will be when you are at your natural self. The interview panel will discover you, if you believe in loads of good qualities in you. However, since no one would like to miss the chance of converting the call and getting the admission opportunity at FMS Delhi, important do’s and don’ts that would help in PI process are shared below

-Most of the times the PI begins either with the 'views' expressed during the 'extempore' or with a discussion around one's bio-data given in the application form. So focus on them

-There could be a few questions on one's academic background to assess the depth and accuracy of knowledge. So be good in them

-There could be a few General Awareness questions. Read the newspaper daily as you are supposed to know their answers

-Subsequent questions usually follow from the previous responses of the candidate. So be on your own while answering the questions in PI round. Try to bring the panel to your knowledge and expertise domain through your rich responses.

-You can compensate for any low percentile in PI round. Remain on your natural self and avoid any misleading answer. This can help you more to compensate for low score in this individual process.

- Avoid the coached responses. Most of the 'coached' responses or behaviors are viewed as ‘acting’ which can jeopardize your chances to be at FMS. All charms wear off when an amateur actor appears as a poor caricature of someone else

- The panel is essentially looking for 'quality of thought process' and 'natural leadership behavior' any artificial or mugged up participation will draw negative attention and fail to impress the assessors who are well experienced.

Since Delhi University is a Central University and FMS is governed by DU rules, FMS has no reservation for any seat for residents or students of Delhi or Delhi University. This fact goes to benefit many MBA aspirants as short-listed candidates come from all over India. The B school has been declaring the final admission result on the last day of PI round itself and the trend is expected to continue in admission 2015 as well.