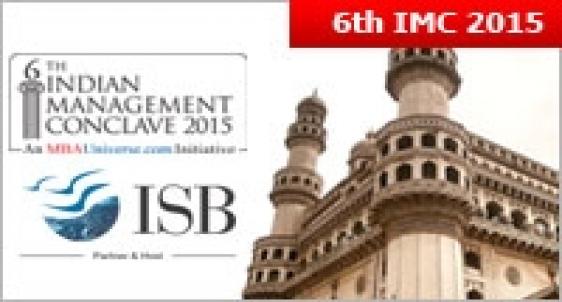 Indian School of Business (ISB) is partnering and going to host the 6th edition of MBAUniverse.com convened Indian Management Conclave (IMC) 2015 at its Hyderabad campus on July 29-30, 2015. Breaking new boundaries, IMC has come to be recognized as India's definitive management education conference during the last five years. The conclave will feature addresses by 30 leading management thinkers from India and Abroad on the theme of 'Enhancing B-school Competitiveness'.

Announcing IMC 2015, Amit Agnihotri, Chairman, MBAUniverse.com said, "Given the unrestrained growth during 1991-2008 period, Management education has become one of the most competitive sectors in India. Only 100-125 serious management education entities have withstood the struggle and come out as survivors of this unprecedented period of shakeout - 2008-2014. These forward looking institutions are now looking for ways to enhance their competitiveness-both within Indian context, and increasingly in the global arena. With this as the backdrop, the 6th Indian Management Conclave 2015 will focus on the theme of Enhancing B-school Competitiveness. We are thankful to Indian School of Business (ISB) for accepting to partner and host IMC 2015 at ISB Hyderabad Campus."

Welcoming IMC to its iconic Hyderabad campus, Mr Ajit Rangnekar, Dean, ISB said, "Given its strength of 3 Ds - Democracy, Demography and Demand, India today is at the heart of global discussions on sustainable growth and 'future of business'. B-Schools in India are in the midst of exciting times. In this backdrop, Indian School of Business (ISB) is pleased to partner and host Indian Management Conclave 2015 in Hyderabad on July 29 & 30, 2015. Organized by MBAUniverse.com since 2010, IMC is recognized as India's definitive thought-leadership conference on Management education. Enhancing B-School Competitiveness -- the theme for 6th IMC 2015 is very timely. We warmly welcome Deans, Faculty members and Administrators to our Hyderabad campus."

Given the unbridled growth during 1991-2008 period, Management education has become one of the most competitive sectors in India. Every year, 3500+ MBA programs compete to attract about 250,000 students. This oversupply and commoditization of MBA program in India has led to massive shakeout in last five years. While the universe is still large, only 100-125 serious management education entities have withstood the struggle and come out as survivors of this unprecedented period of shakeout. Amongst them, forward looking institutions are now looking for ways to enhance their competitiveness - both within Indian context, and increasingly in the global arena.

With this as the backdrop, the 6th Indian Management Conclave 2015 will focus on the theme of Enhancing B-school Competitiveness. IMC 2015 will host keynote addresses, panel discussions, IMC Awards finalists’ presentation and workshops for understanding the micro-factors that enhance B-school competitiveness in Indian context.

In 2013, to further the vision of IMC Conference, the 1st Indian Management Conclave Awards, popularly known as IMC Awards, were launched. The core objective of IMC Awards is to identify, document and recognize the Best-practices and successful Initiatives undertaken by Indian B-schools on contemporary themes. India's most distinguished MBA educators adjudicate the award entries. Awards are presented by icons like HRD minister, Global management-thinkers and Business magnates. The winning initiatives are documented and shared with 1000+ Institutions and 10,000+ educators in India and abroad. IMC Awards is a non-profit initiatives and no fee is charged from participating institutions.

The themes and timelines for IMC Awards 2015 will be announced soon.

The 6th Indian Management Conclave 2015 will mark the completion of five years of IMC journey. Let's take a look at the IMC journey - from 2010 to 2015.

India has one of the biggest MBA education infrastructures in the world, with 3500+ MBA programs being offered to more than 2.5 lakhs students every year. However, the Indian MBA market has gone through an unprecedented phase of shake-out & consolidation since 2008. At the same time, with rise of India and Asia, our B-schools have unprecedented opportunities to make a mark at the global stage, and also meet the domestic skills market.

With time, IMC has redefined its focus - from discussing problems to finding solutions for management education in India. The first three IMC conclaves (2010, 2011, 2012) were devoted to understanding the Challenges facing Indian MBA. IMC released MBAUniverse.com MBA Employability report in 2012 which nailed the key challenge of low employability.

Since 2013, IMC has evolved from a platform for finding the Solutions. In 2013, with the theme of 'Enhancing the Value of MBA', the 1st annual IMC Awards were held. The theme for 5th IMC 2014 was even bolder - ‘Envisioning the Future of Indian MBA education'. At this conference, EPSI & MBAUniverse.com released a discussion paper titled ‘Vision 2025 for Indian Management Education’. This paper is now being published by McGraw Hill for wider circulation amongst policy-makers and other stakeholders.

The 6th IMC 2015 theme takes the discussion forward towards micro-analysis of B-school competitiveness with the theme - 'Enhancing B-school Competitiveness'. The theme takes cognizance of the facts presented in Vision 2025 paper that while policy needs a rethink, at a micro-level, Top 25-30 Indian B-schools have to be much more competitive to earn Global recognition and impact. And Mid-tier 75-100 National B-schools, who have survived the massive B-school shakeout, now have to enhance their Competitiveness to grow in near future.