MBAUniverse.com News Desk | :
May 6, 2015
FMS Delhi announced the list of selected candidates for MBA admission 2015-17 batch on the last day of PI round 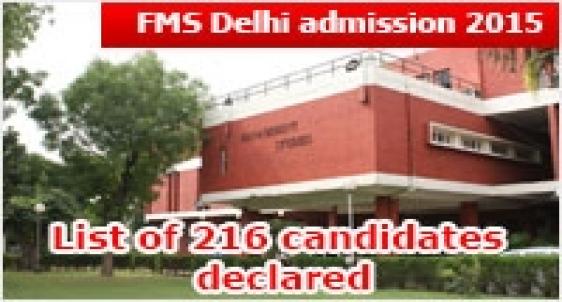 Selected candidates have to report in person at the office of FMS Delhi between 10 AM to 5 PM wef May 11 to 25, 2015 from Monday to Friday to finalise the admission process

Keeping the legacy of declaring the final admission result on the last day of PI round, FMS Delhi announced the list of selected candidates for MBA admission 2015-17 batch on the last day of PI round on April 20, 2015 after the process of extempore and Personal Interview got over. For an intake of 216 candidates FMS Delhi has announced a list of 216 successful candidates covering all categories. A waiting list of a total of 379 candidates in order of merit has also been announced by the coveted B school.

Along with the declared results for full time MBA Programme, FMS has also announced the admission results for executive MBA.

All selected candidates whose names appear in the final admission list of FMS Delhi are required to present themselves in person at FMS Office for Admission during the period from May 11, 2015 to May 25, 2015 between 10:00 AM to 5:00 PM from Monday to Friday, please note.

You have to produce Original Certificates in support of your Age, Qualifications and Marks obtained in various examinations right from school until final degree examination to satisfy the minimum eligibility conditions as prescribed for Admission to the MBA course at FMS Delhi.

The Reserved Category candidates will be required to produce the Original Certificates on the basis of which they are seeking admission, issued by the appropriate and competent authority.

You are supposed to deposit the required fee of Rs.11,000/-(Approx) as per University of Delhi rules while finalising your MBA admission at FMS Delhi during the prescribed period.

Please bring with you 4 stamp-size photographs with your name written in block letters at the back in a small envelope bearing your name.

Stay tuned to MBAUniverse.com for more updates on FMS Admission 2015