MBAUniverse.com News Desk | :
May 12, 2015
IIM Raipur has again achieved 100% placement for the PGP class 2013-15 with higher compensation packages for the batch of 119 students 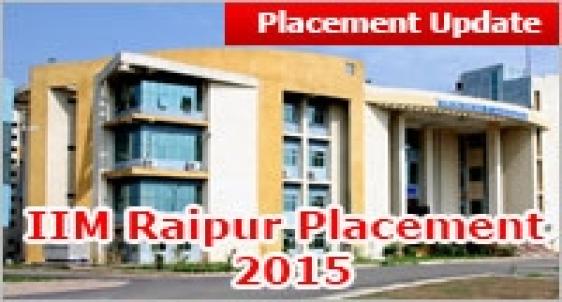 Indian Institute of Management (IIM) Raipur has again achieved 100% placement for the PGP class 2013-15 with higher compensation packages for the batch of 119 students participating in the placement process. 120 recruiters including many first timers reposing faith in management education at IIM Raipur visited the campus for placement 2015.

IIM Raipur although began its placement process later than number of top rated B schools, but completed it much earlier than many of them in the month of February 2015 itself. However, due to the cumbersome process in releasing the final placement report IIM Raipur has been able to release the Placement 2015 report in May 2015 only. The placement 2015 reflected an upward swing in recruitment with more recruiters offering higher placement packages while the companies competed among themselves in offer of more jobs.

Since its inception in 2010 IIM Raipur has had the legacy of 100% placement. The placement season 2015 was no exception to the feat. Entire placement 2015 process at IIM Raipur witnessed the offers of diverse roles from 120 recruiters.

7 students were offered international profiles with the highest offer at Rs.32.55 lakhs.

There were 12 Pre placement offers (PPOs) made by the recruiters in placement 2015. It emphasises that the students from IIM Raipur have proved their mettle in the industry again.

42% of the batch at IIM Raipur has been placed in Sales & Marketing domain followed by Operations & General management with 25% placement in 2015. 17% students were offered role in Consulting while finance domain offered placement to 14% followed b y HR with 2%.

Top recruiters in placement 2015 include many first timers also while the old buddies are maintaining and growing their relationship with IIM Raipur.