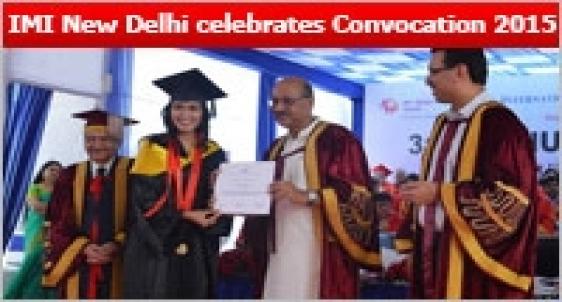 `It is a very large universe in the marketplace but a very small universe at the workplace` Shekhar Gupta, Vice President India Today Group & Chief Guest at IMI Convocation 2015

After Shri Sanjiv Goenka, Chairman IMI Board of Governors declared the ceremony open; the solemn occasion began with a tribute to Goddess Sarasvati in the form of a musical performance. Shri Goenka addressed the gathering by expressing his happiness about being at IMI New Delhi on this ‘special’ occasion. “For us, it is a special morning too, because it is special to you”, he said to the graduating students. He expressed immense pride in the progress made by IMI New Delhi and said, “IMI is growing in stature because of increased number of accreditations and better rankings”.

Shri Sanjiv Goenka spoke about the previous batches of IMI students who are now alumni of the institute. He praised their success and said, “The alumni are doing really well in their respective companies”

He was thankful to the Chief Guest, Shri Shekhar Gupta for his esteemed presence and highlighted the latter’s greatness in the field of journalism by mentioning, “He is one of the most credible and respected writers we have today.”

Sharing the message for the graduating class of 2013–2015 Shri Sanjeev Goenka said “Change and re-invention have become a way of life and each one of us has to keep reinventing ourselves”, he told them. Congratulating the students on successful completion of their PGDM programme, Shri Goenka inspired them with the quote, “The world is at your feet. Go and conquer it.”

Dr. Bakul Dholakia addressed the gathering and presented the report highlighting the achievements of IMI in the past year and shared “IMI New Delhi has participated in ‘six’ B – School Surveys and it has been ranked in the Top 10 by four of these six surveys.”

He praised the contribution of the IMI faculty in the field of research by indicating that the faculty has published 70 papers in different research journals.

He thanked the guests for their presence and especially thanked Shri Sanjiv Goenka for his continuous support and constant encouragement. Addressing the gathering with the much-needed words for life, “Ethical conduct is a matter of self-belief and practice.” Dr Dholakia ended his inspirational speech.

The students of the graduating PGDM, PGDHRM, Ex-PGDM and PGDM-WE were individually felicitated by Shri Sanjiv Goenka. Mr. Shekhar Gupta, the chief guest, presented the awards to the scholastic achievers.

Delivering the Convocation speech Shri Shekhar Gupta began by talking about what management is and went on to explain how management is about managing your own equanimity more than anything else. Speaking about how maintaining good and healthy relationships always adds value to life by narrating a few anecdotes from his life, Shri Gupta compared running a business to flying a kite. He said that a businessman should know the balancing act between letting it go and pulling it back.

Shri Sanjiv Goenka ended the ceremony by declaring the proceedings as closed.

IMI New Delhi is the prominent and one of the top rated B-Schools in India. The institute is accredited by Association of MBAs (AMBA). IMI has academic collaborations with many top rated foreign B-Schools like McGill University, Montreal, Canada; and Manchester Business School, U.K. IMI Delhi has a very good reputation in terms of Placements.

IMI Delhi is ranked among top 5 private B schools in MBAUniverse.com ranking 2014-15. The B school has a large alumni base holding top positions in the corporate and industrial sectors across the globe. So far CAT (Common Admission Test) conducted by IIMs has been the mandatory exam for admission to this prestigious B school.