MBAUniverse.com News Desk | :
May 19, 2015
EPSI has convened a meeting of Chairpersons and Directors of PGDM Institutions at IHC, New Delhi on May 20, 2015 at 2 PM to discuss Implications of the IIM Bill 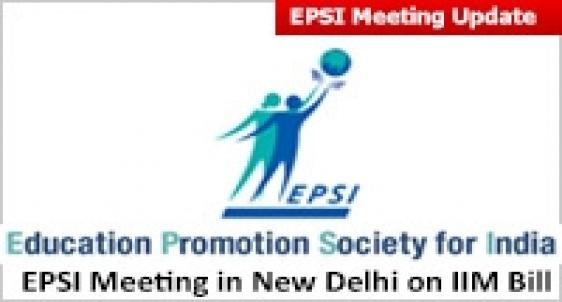 "If the IIM Bill 2015 is passed by the parliament, it will put a big question mark on PGDM Programmes" Dr H Chaturvedi Alternate President- EPSI and Director BIMTECH

Alarmed at the anticipated adverse future prospects on operations of Private PGDM B schools on account of IIM Bill 2015 proposed by Government of India, EPSI has convened a meeting of Chairpersons and Directors of PGDM Institutions at India Habitat Centre (IHC), New Delhi on May 20, 2015 at 2 PM to discuss Implications of the IIM Bill.

The interactive meeting convened by Education Promotion Society for India (EPSI) will comprise Chairmen and Directors of all self-financed PGDM institutions and will be at Jacaranda II, IHC Lodhi Road, New Delhi.  More than 50 chairpersons and directors of leading PGDM institutions have consented to join the meeting.  EPSI plans to formulate a common strategy for dealing with the repercussion of the proposed IIM Bill, 2015 by convening this national level meeting.

In view of Dr H Chaturvedi Alternate President- EPSI and Director BIMTECH Greater Noida “For all PGDM institutions, being run by private trust or societies, the proposed bill is not a good omen because it will create a very unfavourable situation for these institutions which confer their own Post Graduate Diploma in Management (PGDM). If the IIM Bill 2015 is passed by the parliament, it will put a big question mark on PGDM Programmes. The legal, financial and market validity of PGDM will be in jeopardy.”

EPSI has appealed to all PGDM institutions that they should not remain silent and join hands for finding a sustainable solution. Emphasizing the role of EPSI, Dr Chaturvedi says “The EPSI has always been in the forefront to help these institutions in past and reiterate to take lead on this issue also.”

EPSI proposes following alternatives on which the interactive meeting on May 20, 2015 will propose to develop a consensus

• MHRD can be requested to provide a level playing field to PGDM institutions for granting them power to confer MBA degree. MHRD can pass a separate bill for this purpose.

• All those PGDM institutions which are 20 years old or have been accredited by NBA or NAAC can be given degree awarding powers similar to IIMs as proposed.

• An Indian Management Council (AIMC) should be set up as a regulatory body for Management Education. It can take over current role of AICTE and should act as a catalyst for management education at undergraduate, post graduate and doctoral levels.

For the last few years, Ministry of HRD, Govt of India has been contemplating the idea of introducing the awaited IIM Bill in Parliament to enable IIMs to award MBA degree instead of Diploma to passing out students. The statutory requirement will be to form a council on the lines of the council for IITs to oversee the functioning of IIMs.

It has been reported that the draft bill has already been sent by the MHRD to the Union Cabinet on March 11, 2015. The bill proposes to create an over arching body headed by HRD Minister and Chairpersons and directors of all IIMs as members. It is said that the purpose of The IIM Bill, 2015 is mainly to benefit IIM’s graduates applying abroad for research opportunities and also helping IIMs to attract foreign students.

The proposed IIM Bill if passed and becomes IIM ACT, it  may put a question mark on highly rated PGDM programmes of top private B schools like XLRI, SPJIMR, MDI, BIMTECH, IMT, TAPMI and many more. It may create unfavourable situation putting the market validity of their PGDM programmes at loss. These B schools sustain on the basis of quality education they impart, have large alumni base and keep the PGDM education flag flying without any Government aid & funds.

It will sure be a good idea if Ministry of HRD also evolves the process of empowering these Private B schools by providing level playing field with IIMs so that they may also award MBA degree to their passing out students.

EPSI, a not for profit autonomous society with mandate from Universities and institutions as its members is the frontrunner to deliberate on the issues and concern to raise education quality and attain benchmark standards of the national and international level.

Apart from the objective to lay down standards and quality of educational programs EPSI also moves ahead with an objective to advise or represent to Government, Local Authorities, Bodies on the policies adopted by them in relation to governance of education, if such policies or measures have a bearing directly or indirectly on this sector.

Stay tuned to MBAUniverse.com for more updates on IIM Bill