MBAUniverse.com News Desk | :
May 26, 2015
Stage of indecision hovers on the timely commencement of operation of IIM Visakhapatnam in 2015, as decisions on many issues are pending at various levels 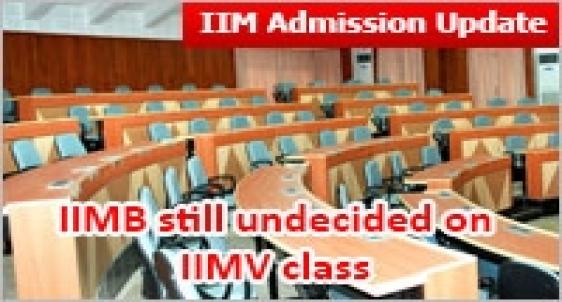 "We have not yet reviewed admissions decision and we cannot comment on class size till we do" Kavitha Kumar, Head of Communications IIM Bangalore

No final decision by IIM Bangalore, the mentor IIM for IIM Visakhapatnam appears to have been taken on exact class size of the proposed 14 baby in IIM family. CAT 2014 takers with high percentile waiting to get admission in IIMV are clueless on scheduled commencement of IIMV operation in the academic session 2015-16.

Sharing with MBAUniverse.com Ms. Kavitha Kumar - Head of Communications  at IIM Bangalore said "We have not yet reviewed admissions decision and we cannot comment on class size till we do". It implies that till date  the admissions decision on the proposed class size for the batch 2015-17 at IIM Visakhapatnam has not been reviewed nor finalized by the mentor IIM Bangalore. However as per the availability of infrastructure at the temporary campus of IIM Visakhapatnam like smaller size of class rooms, lack of availability of well equipped laboratories and library, lack of accommodation facilities for students and faculty may not  get nod from IIM Bangalore to proceed with full fledged strength of 60 students in the first batch.

The stage of indecision persists despite the fact that IIM Visakhapatnam is the first among the 6 proposed new IIMs and is the 14th IIM in the family of IIMs whose permanent and temporary campuses were finalized at Visakhapatnam even before the location sites for other proposed IIMs were announced.

The stage of indecision hovers on the timely commencement of operation of IIM Visakhapatnam in 2015 as decisions on many issues are pending at various levels.

Proposed to commence operations in August 2015

Indian Institute of Management (IIM) Visakhapatnam (Vizag) is expected to commence its maiden PGP (MBA) programme in August 2015 but the modalities are yet to be finalized. Late beginning of academic session may prove detrimental in completing the course cycle on time.

IIM Visakhapatnam has to commence operation from the temporary premises allotted to it at Andhra University campus. The campus is unable to provide proper hostel accommodation for students, faculty. The computer labs are yet to be equipped and small class rooms would call for better infrastructure to impart management education at IIM Visakhapatnam.

So far neither the Andhra University nor the mentor IIM Bangalore has been able to add and augment the desired facilities.

IIM Visakhapatnam is the first of the 6 proposed IIMs, the permanent and temporary campuses for which were finalized most promptly. While the sites for other proposed IIMs were either only been announced or the stake holder teams are still searching for their sites, the foundation stone for the permanent campus of IIM-Visakhapatnam at Gambheeram village in Andhra Pradesh was laid by Union HRD Minister Smriti Irani on January 17, 2015 in the presence of  Union Minister of Urban Development M Venkaiah Naidu and Chief Minister N Chandrababu Naidu.

Besides, the temporary campus of IIM Visakhapatnam was also finalised on top priority at Andhra University premises till the 300+ acre permanent campus is ready with all the requisite infrastructural facilities to accommodate the IIM Visakhapatnam.

It is surprising that despite the lapse of more than 4-5 months after finalization of campuses and reviewing all the necessary requirements at the material time to begin the operation of IIM Visakhapatnam in July/August 2015, the various issues on its commencement of operation are still pending.

Probably, after announcing the setting up of proposed IIMs in various states, MHRD didn’t take care to expedite the things in consultation with State Government despite having one of best B schools of the country IIM Bangalore as the mentor of IIM Visakhapatnam.

Even before commencement of operation every B school prepares and launches its website to update information on proposed admission process, intake, fee structure, infrastructure-present and proposed. While the registration for IIM Andhra, now IIM Visakhapatnam, was done with CAT 2014 application process in the month of August, 2014, no website sharing anything on the proposed B school could be prepared in the past 9-10 months.

IIM Visakhapatnam whose director has not yet been appointed nor there are proper whereabouts of the details for the proposed commencement of operations in 2015 could itself might have not launched its website, but IIM Bangalore and MHRD could have done much more on this aspect to provide valid and genuine updates and convince the IIM Visakhapatnam aspirants that the B school would start operation on time with details on programme curriculum and intake.

It is expected from all the stake holders responsible to commence operations of IIM Visakhapatnam to place the mandatory information in public domain at least.

Stay tuned to MBAUniverse.com for more updates on IIM Visakhapatnam