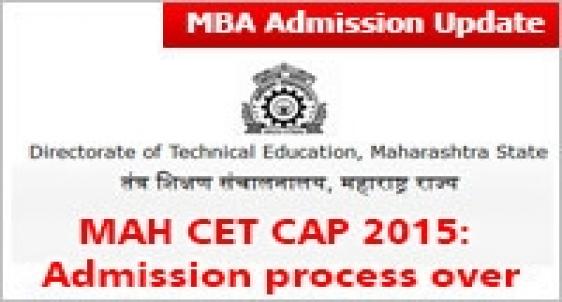 Without extending even for a single day either the registration for Centralized Admission Process(CAP) or the document verification process for admission 2015-17 batch of MBA/MMS/PGDM programmes across Maharashtra, Directorate of Technical Education (DTE) Maharashtra closed the CAP 2015 on June 1, 2015 and proposes to publish the provisional merit list of selected candidates today on June 2, 2015 around 2 PM.

Unlike CAP 2014 which was extended for a substantial period to attract more candidates to fill up the MBA/MMS seats in Maharashtra B schools, DTE Maharashtra appears to have decided not to extend the admission process beyond the pre announced date, come what may.

It is to be noted that there are about 44000 MBA/MMS seats to be filled up in Maharashtra B schools in 2015 and thousands of MBA/MMS seats remained vacant in 2014, which compelled DTE Maharashtra to reopen the CAP 2014 process, the similar scenario may repeat in 2015, if certain timely and judicious decisions by DTE Maharashtra are not taken.

Each Maharashtra State candidate who has appeared and qualified the MAH‐MBA/MMS ‐CET 2015 has been assigned a State level Merit Number on the basis of percentile obtained in the test. MAH‐MBA/MMS CET 2015.

For All India seats the relevant state level merit number has been assigned to the candidates on the basis of performance in CAT 2014/CMAT 2015/GMAT/MAT 2015/XAT 2015/ATMA apart from MAH-MBA/MMS‐CET 2015. If the candidate has appeared for multiple examinations, the best percentile has been considered to assign the merit number.

Admission to the B school through CAP 2015 and allotment of seat has been made strictly on the basis of the merit number in the respective merit list for Maharashtra State/All India candidates as per the options given by the candidate and the number of seats available for that candidate during the process of allotment.

MAH CET 2015 was conducted on March 14 & 15, 2015 for admission to MBA/MMS programmes commencing in 2015 in Maharashtra B schools. There were errors in the test due to which the result of Maharashtra CET 2015 was challenged by the aggrieved candidates in Bombay High Court.

After prolonged arguments, Bombay High Court allowed DTE Maharashtra to conduct CAP 2015. The Directorate of Technical Education (DTE) Maharashtra fearing lest some issues come up again in regard to their CAP 2015 has chosen not to extend CAP 2015 dates although number of seats in Maharashtra B schools could go vacant again in 2015.

Register below free to get LIVE MAH CET Admission 2015 Updates

MAH CET CAP 2015: Don`t get carried away with confusing words of DTE; 5 precautions while applying

Stay tuned to MBAUniverse.com for more updates on MAH CET 2015