MBAUniverse.com News Desk | :
June 18, 2015
With IIM Ahmedabad in command to convene CAT 2015, it is very much possible that not only the exam pattern but the scoring weightage on different sections may also change 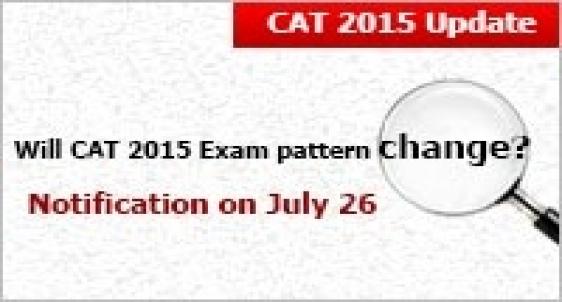 "Every year we review CAT and make certain changes- both operational and content" Prof Tathagata Bandyopadhyay, convener CAT 2015 and faculty at IIM Ahmedabad

With Asia’s No.1 Business School, Indian Institute of Management (IIM) Ahmedabad in command to convene CAT 2015, it is very much possible that not only the exam pattern but the scoring weightage on different sections may also change.

Responding to MBAUniverse.com query why the changes and surprises spring up in CAT and whether the same are expected in CAT 2015 also, Prof Tathagata Bandyopadhyay, convener CAT 2015 and faculty at IIM Ahmedabad has shared a brief reply “Every year we review CAT and make certain changes- both operational and content”

Whatever meaning the CAT 2015 aspirants may derive out of this short rich statement, it has many angles. According to Prof S K Agarwal when the review is for past CAT exam keeping in view the next CAT exam, it tries to plug many weak points in order to improve it further.

Anticipated changes at operational level
CAT 2015 may have different slots and more test centres than they were there in CAT 2014. IIMs have been worried about depleting gender diversity and thus number of them are awarding weightage to female candidate. It is possible that some extra convenient exam taking slot or centre may be facilitated to attract more female candidates.

Earlier also CAT, during its paper-pencil exam mode used to be conducted in a single day.  The target may be achieved by IIM Ahmedabad and testing partner TCS by managing it more efficiently. In CAT 2014 the entire exam was summed up in 4 sessions in 2 days. So the task may not be difficult to further reduce the testing window by one day. The only need will be to increase the number of test centres and test labs for CAT 2015.

Anticipated changes at content level
According to Prof S K Agarwal, exam pattern, number of questions, type of questions and time constraint are some of the major areas where surprises may take the aspirants off guard. Although in CAT 2014, the CAT centre 2014 had advised well before the exam that there would be 100 questions to be solved in total time limit of 170 minutes as against the 60 questions to be solved in 140 minutes with sectional time constrain in CAT 2013, CAT 2015 may or may not follow suit.

With the promise to offer an aspirant friendly CAT, the exam in 2014 was comparatively more smooth with no technical glitches reported during the exam. TCS the CAT 2015 testing agency is gearing up to improve this record even further. It is anticipated that there would be 100+ questions in CAT 2015 to be solved in 180 minutes as the CAT 2014 test takers remained too short of time to solve the test.

Another anticipated change could be of question types and patterns.  CAT 2014 did not have any vocabulary based question; it did not ask to complete the paragraph by inserting the last sentence. It is possible that questions on vocabulary may again make their presence in CAT 2015 and instead of last sentence or paragraph, you may find the questions to pick out the first sentence of paragraph from the given answer options.

So far CAT has not focused on questions on General Awareness although this section has been making its presence in almost all the MBA/PGDM entrance exams like XAT/CMAT. It may be possible that CAT 2015 introduces this section without weightage in first shortlisting criteria.

Common Admission Test (CAT) 2015 is the mandatory exam for admission to IIMs and other top rated B schools for admission session 2016-17. The notification for CAT 2015 will be released by IIM Ahmedabad on July 26, 2015 and the registration process for CAT 2015 is proposed to open in first week of August 2015.  The computer based CAT 2015 test is supposed to be conducted in the month of October 2015.

There may not be any facility of Off- line application process and all the registration activity will have to completed on-line only.

CAT 2015 Notification: What we can expect in the release; know more

CAT 2015: Utilize best the next 150 days; how to overcome the weakness and focus on your strengths