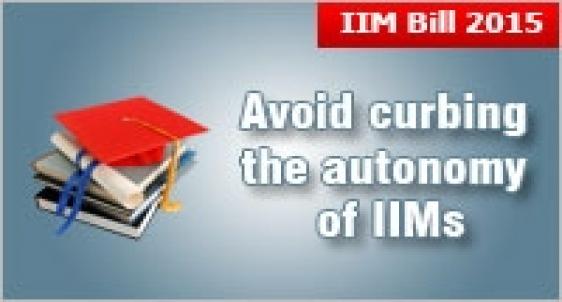 The government can definitely oversee functioning of educational institutions from a distance, but micro-management is never good Prof Ashish Nanda Director IIM Ahmedabad

Prof Ashish Nanda, Director IIM Ahmedabad while talking to media on June 18, 2015 at a seminar organized at IIFL on the occasion of 1974 IIM Ahmedabad alumnus and former Planning commission member P P Pandey donating Rs 8 Crores to set up a swimming pool and state-of-the-art auditorium at the institute, advised against the provisions of micro-management of IIMs in proposed IIM Bill 2015 that could curb the autonomy of the top B-schools of the country.

Ministry of HRD, Govt of India has been contemplating the idea of introducing the IIM Bill 2015 in Parliament to enable IIMs to award MBA degree instead of Diploma to passing out students. The statutory requirement will be to form a council on the lines of the council for IITs to oversee the functioning of IIMs. The IIM Bill 2015 proposes more centralization of powers with the council headed by MHRD curbing the autonomy of IIMs to a large extent.

IIMs despite welcoming the move are afraid of losing their autonomy due to the application of this Bill. IIM Ahmedabad has not been in favour of such a bill in the past due to which it remained suspended.

Formation of IIM council would change the institutes into statutory bodies to offer masters' degrees and doctorates, instead of diplomas and fellowships. Since degrees can be awarded only by universities and institutes such as Indian Institutes of Technology (IITs), set up by an act of Parliament or state legislatures, and those declared deemed-to-be-universities under the UGC Act, IIMs cannot award degrees, as they have been set up as societies, under the Societies Registration Act.

IIMs in favour of autonomy
IIMs are in favour of the bill but want the council to have low representation of bureaucrats and greater representation of industry, academicians and IIM officials. The idea of forming a council for IIMs was proposed by the IIM Review committee in 2009 led by Mr R C Bhargava Chairman Maruti Udyog Ltd .  In view of Mr Bhargava“A certain degree of coordination is required in what the IIMs are doing. And, as IIMs provide managers, I think periodically, some outside inputs are required for IIMs to ensure they are up-to-date with the environment changes in India, so that education in IIMs is consistent with what is required for our national goals”

Disruption in formation of IIM Society could prove detrimental to IIM autonomy. Accordingly the older IIMs with large and influential alumni base like IIM Ahmedabad, Bangalore, Calcutta, Lucknow and others are not in favour of dissolving their societies as they have their alumni and donors who have been accommodated in the societies. IIMs wouldn’t like to disrupt the formation and have requested the MHRD to retain it in the IIM Bill 2015.

Speaking on the issue Prof Ashish Nanda added "We do not know whether this body would be the highest decision-making body or have limited powers for coordination among various IIMs"
The IIM Bill 2015 also aims to make the President a visitor to all IIMs and introduce a uniform four-year term for all IIM chairpersons.

Before making the proposed IIM Bill 2015, the IIM Act 2015, it would be better to incorporate necessary amendments and decide that IIM council should be different from IIT council and as such it should function as coordination forum not disturbing the autonomy of IIMs.