MBAUniverse.com News Desk | :
June 24, 2015
Instead of 100+ acres site at Awana in Ajnala Tehsil, the Central site selection team has finalized 60 acres site near Manawala for permanent campus of IIM Amritsar. 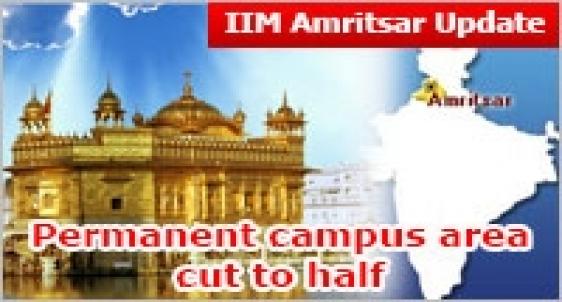 The central site selection team was not much impressed with the earlier proposed 100+ acres Permanent campus site of IIM Amritsar at Awana and therefore chose to visit the alternate sites again on June 18, 2015. The team has selected and recommended the much nearer 60 acres site to main Amritsar city near Manawala.

The proposed IIM Amritsar permanent campus site was owned by a Delhi-based private party and has recently been purchased by the Amritsar Development Authority (ADA). ADA has agreed to transfer the land to the IIM Society without any cost.

The site has been chosen and duly recommended by the team with the note “The site selection committee recommends this site comprising 60 acres of land as being appropriate for setting up the proposed IIM”. In fact 60 acres is the minimum land requirement to set up an IIM.

IIM Amritsar is proposed to begin functioning from August 2015 from its temporary campus at  Punjab Institute of Technology near the Guru Nanak Dev University (GNDU).

The new campus is much nearer to Amritsar city and is only 7Kms away from ISBT (Inter-State Bus Terminus); 9 Kms from Railway station and 18 Kms from Sri Guru Ram Das ji International Airport, Amritsar.

Site selection kindles hope among aspirants
Earlier reports that IIM Amritsar may not take off in 2015 are now subdued and MBA aspirants who have scored high percentile in CAT 2014 are hopeful to get admission in IIM Amritsar in 2015 with the mentor IIM Kozhikode busy in launching the website of IIM Amritsar.

IIM Kozhikode has been assigned the responsibility to mentor IIM Amritsar till it becomes fully functional in its permanent campus. As such students opting to study at IIM Amritsar for first few years will have the learning experience from the highly ranked IIM Kozhikode faculty.

First batch with 60 students
IIM Amritsar will kick start the academic session for flagship PGDM/MBA batch 2015-17 in the month of August 2015 with an intake of 60 students. In the forthcoming years the intake may increase gradually.

Candidates who appeared and opted for admission to IIM Punjab in CAT 2014 will have to re-confirm their interest in taking admission to PGP 2015-17 batch at IIM Amritsar. These candidates must have participated in PI/WAT round conducted by IIM Udaipur for new IIMs. A formal mail to this effect is proposed to be sent to them by IIM Kozhikode, the mentor IIM of IIM Amritsar.

As a mentor institute, the faculty members from IIM Kozhikode are supposed to travel to IIM Amritsar to conduct classes. The proposed cost of operation and establishment of IIM Amritsar shall be borne by IIM Kozhikode for about 3 years.