MBAUniverse.com News Desk | :
July 6, 2015
Eligible candidates who do not reconfirm their interest in admission to IIM Sambalpur by the specified last date, shall be excluded from being considered for admission 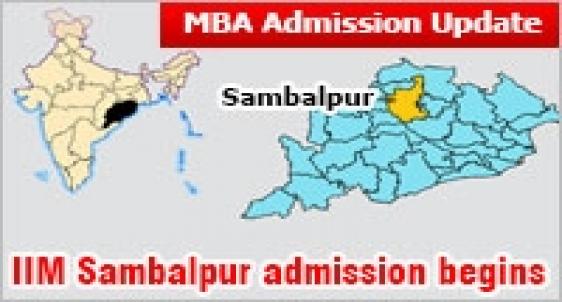 Under the mentorship of IIM Indore, Indian Institute of Management Sampbalpur will start the admission process for the first batch (2015-17) of its Post Graduate Programme in Management (PGP) from July 2015 IIM Indore

Earlier the mentor IIM for IIM Odisha according to MHRD notification was IIM Calcutta. Now due to one or other reason IIM Calcutta is mentoring IIM Bihar in Bodhgaya and IIM Indore has been assigned with the responsibility to mentor IIM Sambalpur in Odisha.

The decision to set up the prestigious Indian Institute of Management in Odisha state at Sambalpur was taken in the Cabinet meeting presided by the Prime Minister Shri Narendra Modi on June 24, 2015. After the announcement, the mentor IIM Indore has begun moving fast and is all set to begin the admission process for IIM Sambalpur shortly by launching the website for the upcoming B school. In regard to beginning of admission process for IIM Sambalpur, IIM  Indore has shared “Please keep visiting the website for admission related announcements”.

Sambalpur wins after a tug-of-war
With everything set right, the twist and tug-of-war between the Central and state Government on IIM Odisha is over now and IIM Sambalpur in Odisha is proposed to take off with its maiden PGP batch 2015-17 from the academic session 2015-16.

Government of Odisha initially recommended Bhubaneshwar as its choice to establish IIM Odisha but later changed the place to Sambalpur in Odisha West. IIM Odisha got entangled between the politics of State and Central Governments. It appeared difficult for IIM Odisha to commence timely operations as the sites for both the campuses-temporary and permanent could not be finalized earlier.

On the fresh recommendations of Government of Odisha, the Ministry of Human Resources Development (MHRD) Government of India deputed to Sambalpur in Odisha-west a team comprising 4 members to inspect and finalize the suggested permanent and temporary campus sites for IIM Odisha. On the recommendations of the team and insistence of Odisha Government, MHRD has consented to establish IIM at Sambalpur taking it away from Bhubaneshwar.

With the sites for both the campuses of the IIM Sambalpur finalized, the academic session 2015-16 of the proposed new IIM Sambalpur in Odisha would begin in August, 2015.

Proposed intake at IIM Sambalpur
Earlier the decision was to have an intake of 60 students for the first batch in each of the proposed 6 new IIMs including IIM Odisha now renamed IIM Sambalpur. Now the decision has been taken in the Cabinet meeting on June 24, 2015 to have an intake of 140 students in each of these proposed 6 new IIMs. But it may not be possible for these new IIMs to accommodate such a large number of students in their temporary campuses as apart from class rooms hostel accommodation for the students would also be required. Accordingly it is proposed that IIM Sambalpur may begin its first batch with 70-80 students.

Since the decision in the Cabinet meeting has also been taken that after 7 years from the launch of IIM Sambalpur and other IIMs, the intake would increase to 560 candidates; it may not pose any problem as the permanent campuses of all these proposed 6 newIIMs would become functional.

Candidates re-confirming interest to be considered
With the admission process expected to be opened at IIM Sambalpur shortly, the already registered candidates for IIM Odisha in CAT 2014 would be required to confirm their interest for admission to PGP at IIM Sambalpur. It has been considered necessary as in CAT-2014, when candidates applied, they had expressed their interest in "IIM in Bihar". Now, the location is known to be Sambalpur. Further, during the time that has passed, many applicants may have already confirmed other options for admissions. Given the relatively short time available for IIM Sambalpur admissions, the institute would not like to spend time on people who are no longer interested in IIM Sambalpur.

The admission offers in each IIM are independent of others and therefore accepting or rejecting an offer from any other IIM will not affect chances in IIM Sambalpur, or vice versa.
The candidates would be provided a link to the registration page where they must express and reconfirm their desire to pursue their candidature further for the admission to PGP in management at “IIM Sambalpur”.

IIM Sambalpur: Proposed Shortlisting criteria
The shortlisting Criteria for eligibility to be considered for admission to Post Graduate Programme in Management, 2015-17 based on CAT 2014 cut off at IIM Sambalpur is expected to be as follows. Candidates not meeting the eligibility criteria may not receive any email.

There will not be any physical GD; PI or WAT to be conducted further for admission to IIM Sambalpur. In fact IIM Sambalpur is expected to use the WAT & PI scores provided by IIM Udaipur which has coordinated the process for new IIMs.

Final Selection at IIM Sambalpur
Selection at this stage will be based on the ranks of the candidates computed separately for each category (General/SC/ST/NC-OBC/DAP) on the basis of their Final Scores (FS). The numbers selected in different categories will be in proportions mandated by the law.

The FS of a candidate, who meet the CAT-2014 cut-offs and who expresses and reconfirms his/her desire to pursue the candidature further by the stipulated date, shall be computed using the formula determined by the mentor IIM Indore.

This may include a few visiting faculty selected by IIM Indore to meet their exacting standards. The overall design, quality and delivery of PGP will be to the standards and with direct involvement of IIM Indore. Candidates going to join IIM Sambalpur should expect to see some of the best faculty members in the country today.